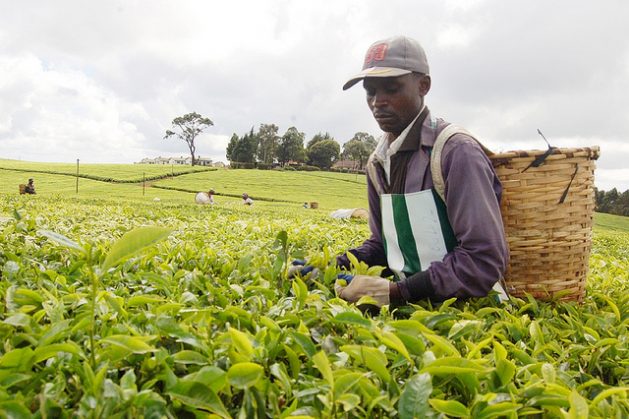 A worker on a farm in Kiambu district, central Kenya, that produces tea for export. Nearly 80 percent of rural farmers in developing countries earn less than USD1.25 per day. Credit: Charles Wachira/IPS

In an annual report set to be presented to governments at the United Nations this week, Special Rapporteur on the Right to Food Hilal Elver found that agricultural workers worldwide continue to face barriers in their right to food including dangerous work conditions and the lack of employment protections.

“[Agricultural workers] are a major element of our reaching available food but they are among the world’s hungriest people,” she said, highlighting the paradoxical relationship.

“We are dealing with smallholder farmers, poverty, inequality, and land issues but we don’t deal with the actual workers working from farm to table—there’s a huge chain of production that we are not paying attention,” Elver added.

Agricultural workers make up over one billion, or one-third, of the world’s workforce.

Despite playing a critical role in global food security, many farm workers are left without enough money to feed themselves or their families in both developing and developed countries due to low wages or even late payments.

In the United States, while the minimum wage is higher, 50 percent of farmworkers were paid less than minimum wage and 48 percent suffered from wage theft.

A survey by the Food Chain Workers Alliance also found that one-quarter of all farm workers have incomes below the federal poverty line, contributing to farmers’ food insecurity and trapping them in poverty.

Migrants and women in the sector often face the brunt of such violations, Elver noted.

“Employers are more likely to consider migrant workers as a disposable, low-wage workforce, silenced without rights to bargain collectively for improved wages and working condition,” she said. 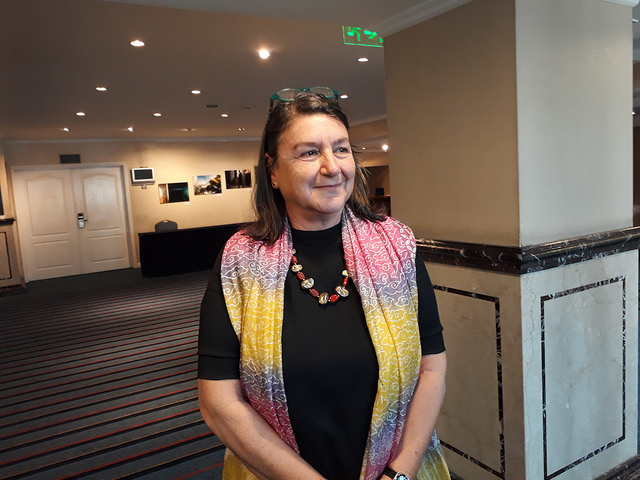 The United Nations Special Rapporteur on the Right to Food, Turkish lawyer Hilal Elver, in Buenos Aires. In an annual report Elver found that agricultural workers worldwide continue to face barriers in their right to food including dangerous work conditions and the lack of employment protections. Credit: Daniel Gutman/IPS

For instance, in California, which produces the majority of the country’s fruits and vegetables, 91 percent of farmworkers are foreign-born, primarily from Mexico. The rates of food insecurity for such labourers and their families range from 40 to 70 percent across the state.

While many industries have adopted minimum wage standards put forth by the International Labor Organization (ILO), they remain unenforced.

Elver also noted that the agricultural sector is the one of the world’s most dangerous sectors with more than 170,000 workers killed every year on unsafe farms, twice the mortality rate of any other industry.

This is partly attributed to the exposure of toxic and hazardous substances such as pesticides, often leading to a range of serious illnesses and even death.

Argentine farmworker Fabian Tomasi, who recently died after contracting severe toxic polyneuropathy linked to his exposure to agrochemicals, is a reminder of this.

Glyphosate, a weed-killer developed by controversial company Monsanto, has been widespread around the world and its use has increased in the South American nation, which is one of the world’s largest soy producers.

Since its use, there has also been an increase in cancer and birth defects in farming regions in Argentina with rural populations experiencing cancer rate three times higher than those in the cities.

In developed countries, acute pesticide poisoning affects one in every 5,000 agricultural workers, the report found.

In the U.S., Dewayne Johnson also used Monsanto’s glyphosate-based herbicides while working as a groundskeeper in California. Years later, he discovered he had non-Hodgkin lymphoma, a debilitating blood cancer.

After bringing the case to court, a California jury ruled against the agrochemical corporation, claiming that it caused Johnson’s terminal cancer and that they acted with malice and negligence in failing to warn consumers.

Monsanto continues to deny allegations that their glyphosate-based products cause cancer.

Now, the U.S. government is trying to reverse a ban on another pesticide chlorpyrifos which has been associated to developmental issues among children and respiratory illnesses.

However, like Johnson, many agricultural workers around the world have begun to organise and rise up to the face of corporations and countries that fail to protect their human rights.

“This is an important new thing, giving the public much more understanding about pesticides,” Elver said.

Migrant farmworkers from Vanuatu recently won a settlement against company Agri Labour Australia after being underpaid and working in dangerous conditions which included exposure to chemicals.

But states must do more to protect and promote the rights of agricultural workers, Elver noted.

The report states that governments must set “living wage” and working standards, and it should establish enforcement and inspection mechanisms to ensure such standards are being met.

The international community should also reduce pesticide use worldwide, including the ban of highly hazardous pesticides and the development of alternative pest management approaches.

International organisations such as ILO and FAO also have a role to play and should establish a fact-finding group to examine whether nations are implementing such changes.

Companies who fabricate evidence or misinform the public of health and environmental risks should be penalised, the report adds.

“It is time for States to step up, and take swift and urgent action to hold accountable those who commit human rights violations against agricultural workers and to prevent further violations,” Elver concluded.