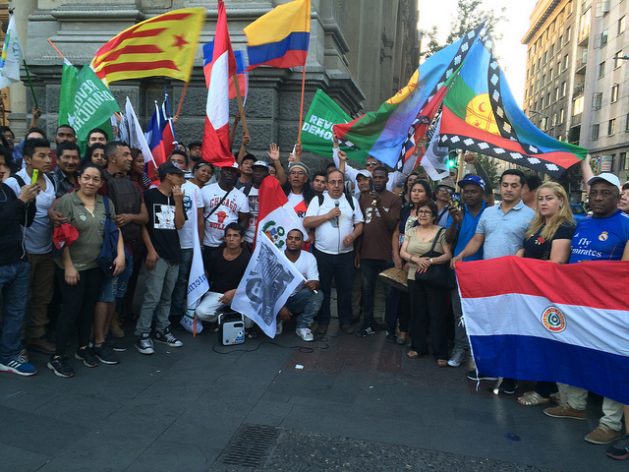 Immigrants in Chile, which draws migrants from other countries in Latin America, celebrate the Fiesta of Cultures for a Dignified Migration waving flags from their countries at the emblematic Plaza de Armas in Santiago on Dec. 18, International Migrants Day. Credit: Orlando Milesi/IPS

SANTIAGO, Dec 20 2018 (IPS) - A landmark global migration pact provides dignity and rights to migrants in every situation and context, stressed representatives of non-governmental organisations in Latin America and the Caribbean, where some 30 million people live outside their countries, forced by economic, social, security, political and now also climatic reasons.

Experts and migrants from the region lamented that some countries are marginalising themselves from this multilateral and collaborative effort to solve a global problem by breaking with a pact that “establishes a minimum foundation for dialogue,” as Rodolfo Noriega of Peru, leader of the National Immigrant Coordinating committee in Chile that includes 72 organisations, told IPS.

The Global Compact for Safe, Orderly and Regular Migration was approved at a Dec. 10-11 intergovernmental conference in Marrakech, Morocco by 164 countries, which on Dec. 19 endorsed it in a vote at the United Nations in New York.

"There are places where the most urgent thing is for the migrant not to lose his or her life, or not to be persecuted, or not to be kidnapped by a trafficking network. There are other contexts in which the problem has to do with discrimination, access to opportunities, access to rights, one's value as a person and not being seen as just a number." -- Juan Pablo Ramacciotti

The right-wing governments of Chile and the Dominican Republic abstained from voting on the agreement, arguing that it does not protect the interests of their countries. This South American country is currently a destination for migrants from neighboring countries, and the Dominican Republic receives a major influx of people from Haiti, with which it shares the island of Hispaniola.

The non-binding agreement has 23 objectives and aims to “minimise the structural factors” that force mass exodus, while including measures against trafficking in persons and the separation of migrant families, and calling for international cooperation, as a first step towards establishing a common approach in a world in which one in 30 people is a migrant.

Juan Pablo Ramacciotti, an official with the Chilean Jesuit Migrant Service, told IPS that the agreement “recognises migrants as people who have dignity and rights in every situation and every context.”

The expert in Latin American migration recalled that currently in this region of 657 million inhabitants, the points of greatest need and crisis for migrants in the region are in the northern triangle of Central America and Venezuela.

In the first case, migrants from Guatemala, Honduras and El Salvador cross Mexico in their attempt to reach the United States, and in the second, thousands of Venezuelans are fleeing a collapsing country and changing the situation in other South American countries.

“Today the caravan of 7,000 migrants (heading to the U.S. via Mexico) has made the headlines around the world, but it is a situation that is constantly repeated. There are caravans that may not be so massive, but they are permanently seeking to reach the United States. It’s a serious situation, a critical issue, where violations of rights and discrimination abound,” Ramacciotti said.

He added that the second problem arises from the economic and political crisis in Venezuela “because many people are leaving that country, presenting a humanitarian challenge, also because of the incorporation of Venezuelans in different countries, especially in South America.” 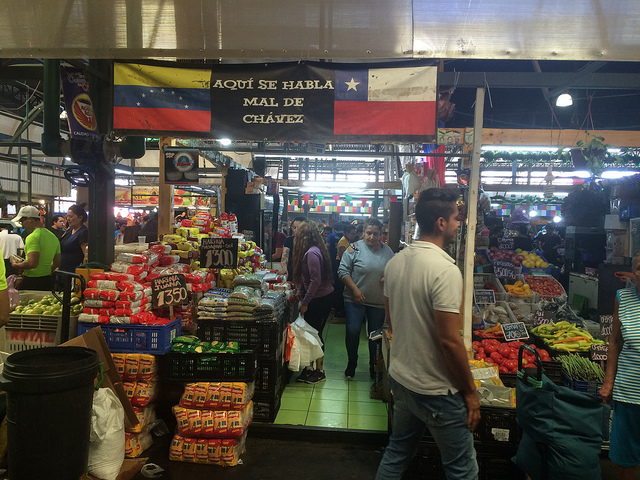 Venezuelan immigrants, whose presence grew explosively in Chile as a result of the chaos in their country, successfully sell their products and typical foods in stalls in Vega Central, Santiago’s main food market, which has become a meeting point for Venezuelans. Credit: Orlando Milesi/IPS

This U.N. agency was responsible for coordinating the Latin American position during the talks leading up to the pact. At its headquarters in Santiago, the first regional meeting to establish a common position was held in August 2017, which concluded with the demand that the agreement ratify the human right to free movement of persons.

Bárcena has indicated that the pact “is a response by the international community to the challenges and opportunities posed by migration, in a global agenda. It is a historic instrument that constitutes an example of renewed multilateral interest.”

In the opinion of the senior U.N. official, the complexity of the phenomenon of migration in the region “has been growing, as revealed by the movements in Central America and the insufficient responses to the so-called mixed flows, including unaccompanied migrant children; emigration from Venezuela and the new realities faced by the receiving countries; and emigration from Haiti and the discrimination suffered by migrants from that country.”

“And as a corollary, the picture of contrasting realities expressed in the endless adversities faced by many migrants on their journeys,” Bárcena said.

Ramacciotti pointed out that migration is caused by situations of humanitarian crisis, political crisis, extreme poverty and war and that therefore it is very important “that we jointly take charge of a problem and a challenge that we all face.” 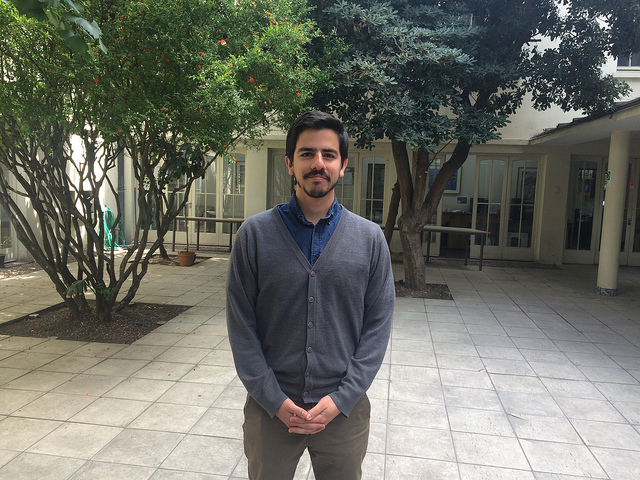 The U.N. Food and Agriculture Organisation (FAO), whose regional headquarters are also in Santiago, added two other ingredients driving people out of Latin American countries: climate change and the lack of opportunities in the countryside.

In Central America, for example, “The massive irregular migration we have seen in recent months is a direct consequence of food insecurity, climate crises, the erosion of the social fabric and the lack of economic opportunities in the rural villages and areas of these countries,” said Kostas Stamoulis, deputy director-general of FAO’s Economic and Social Development Department, earlier this month.

Because of the complexity of the phenomenon, “that migration is an issue that each country sees according to its own criteria, from the borders inward, is not a path that allows us to approach the phenomenon with a vision of the future or understanding that it is a problem that involves everyone: countries of origin, transit and destination,” Ramacciotti said.

He added that the fact that “we reached a pact in which we agree on major issues and which helps us move forward together is very good news for all.”

Noriega, for his part, criticised the non-binding nature of the pact and said that, furthermore, “the power and authority of the State is overvalued without giving a more explicit and full guarantee to the right to migrate.”

The pact means “having a minimum level of dialogue,” he said, but he criticised the reaffirmation of “the power of the State to decide who enters and who does not enter their countries and to decide what treatment irregular or regular immigrants should receive.”

He added that “a rather positive aspect is that it reaffirms principles that international law has already been asserting, such as, for example, that deportation should be a last resort in exceptional circumstances.”

With regard to the biggest threats to migrants, Ramacciotti said that depends on the context and the area in question.

“There are places where the most urgent thing is for the migrant not to lose his or her life, or not to be persecuted, or not to be kidnapped by a trafficking network. There are other contexts in which the problem has to do with discrimination, access to opportunities, access to rights, one’s value as a person and not being seen as just a number,” he explained.