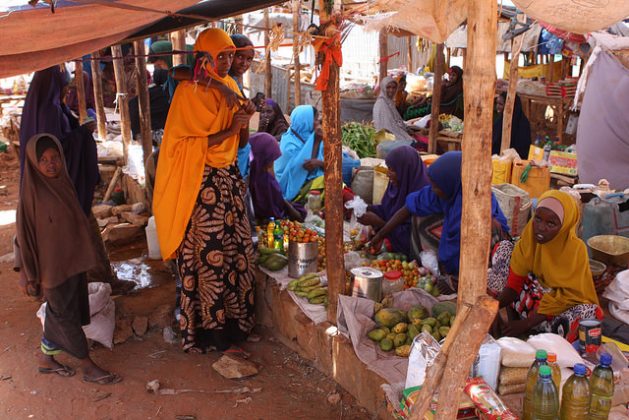 In refugee camps at Dolo Odo, Ethiopia there is enough food for small markets to operate. One in every 70 people around the world is caught up in a crisis, including the refugee crisis, with more than 130 million people expected to need humanitarian aid next year. Credit: James Jeffrey/IPS

MARRAKECH, Morocco, Dec 10 2018 (IPS) - Amidst negative sentiments and last-minute withdrawals from the Global Compact for Safe, Orderly and Regular Migration (GCM) by some member countries, the United Nations says the regrettable decisions are being fuelled by misinformation.

Addressing the media Dec. 9 on the eve of the historic two-day GCM conference in Marrakech, set against the dramatic backdrop of Morocco’s snow-capped Atlas Mountains, Louise Arbour, Special Representative of the Secretary-General for International Migration, addressed the question of whether the U.N. could have been better engaged with countries to persuade them to come on board.

“I have to tell you, I am not convinced you can persuade those who don’t want to be convinced,” Arbour says. “I am skeptical it would not have turned it into a dialogue of the deaf.”

The GCM is the first-ever inter-governmentally negotiated agreement to cover all dimensions of international migration in a holistic and comprehensive manner, providing a platform for cooperation on migration. Its genesis lies in the New York Declaration for Refugees and Migrants adopted unanimously by the U.N. General Assembly in 2016. It is the culmination of 18 months of discussions and consultations among Member States, and other actors, including national and local officials, civil society, private and public sectors and migrants themselves.

“It creates no right to migrate; it places no imposition on States; it does not constitute so-called ‘soft’ law—it is not legally binding,” Arbour says. “It expressly permits States to distinguish, as they see fit, between regular and irregular migrants, in accordance with existing international law. This is not my interpretation of the text—it is the text.”

She added that it is surprising there has been so much misinformation about what the Compact is and what its text says, emphasising that “the adoption of the migration compact is a re-affirmation of the values and principles embodied in the U.N. Charter and in international law.”

This was, she conceded, notwithstanding several member States who have already declined to participate, others making last-minute indications they would not adopt the compact, while some have stated their final decision must await further internal deliberation. These include, most notably, the United States. Other countries also include Austria, Australia, Hungary, Poland, Czech Republic, Dominican Republic, Latvia and Bulgaria, among others. 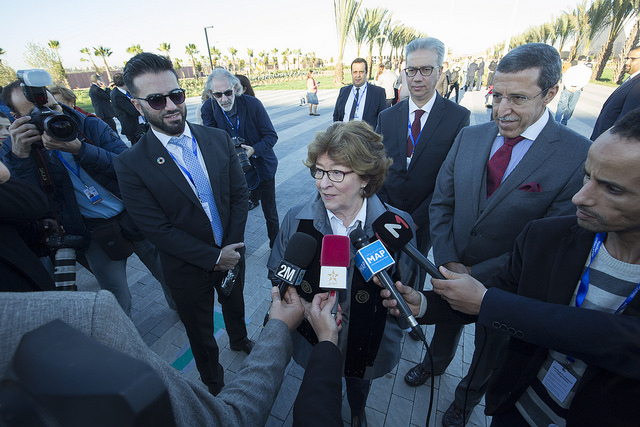 “It is regrettable whenever any State withdraws from a multilateral process, on a global issue, the outcome of which has generated overwhelming support,” Arbour says. “It is particularly regrettable when a State pulls out from a negotiated agreement in which it actively participated a short time before.”

Arbour emphasised the process of adoption would still go on as planned, with over 150 States registered to attend, joined by over 400 partners from the U.N. system, civil society, private sector and academia.

Even with the adoption of the compact, the unwelcome last-minute withdrawals and negative sentiments around the compact have unsettled several stakeholders from civil society.

Carolina Gottardo, director of the Jesuit Refugee Service in Australia, says the civil society movement is concerned with deliberate false information being peddled about the compact.

“It is your role as media to report facts and ignore political ideology,” Gottardo said during an IPS and U.N. Foundation training session for journalists on the eve of the conference.

The GCM defines 23 objectives covering all aspects of migration. Each objective comprises a general goal and a catalogue of possible actions, drawn from best practices, that States may choose to utilise to implement their national migration priorities.

“Many challenges still stand in the way of implementation – not least the toxic, ill-informed narrative that too often persists when it comes to migrants,” Arbour says.

During an evening reception for U.N. delegates that followed Arbour’s announcement, António Guterres, the U.N. Secretary-General, officially launched the U.N. Network on Migration, an agile and inclusive network of all key stakeholders on migration—U.N. agencies that have migration components, private sector, civil society and others—with the aim of mobilising the full resources and expertise to assist Member States in their endeavour to implement the 23 objectives outlined in the compact.

He announced that the “the International Organization for Migration (IOM) will play a central role” in the network.

The U.N. chief also expressed confidence in the new network, highlighting some of its core features, saying it would focus on collaboration and have an inclusive structure, while embodying U.N. values, like diversity and an openness to working with all partners, at all levels.

“Your participation in this conference is a clear demonstration of the importance our global community places on the pursuit of the better management of international migration, through a cooperative approach that is grounded in the principles of state sovereignty, responsibility-sharing, non-discrimination and human rights,” Guterres told conference delegates.

But, as many attending the GCM acknowledge, in this age of social media and polarised political posturing, success all too often depends more on message and narrative—one of the main challenges the GCM, and the migration issue in general, faces.