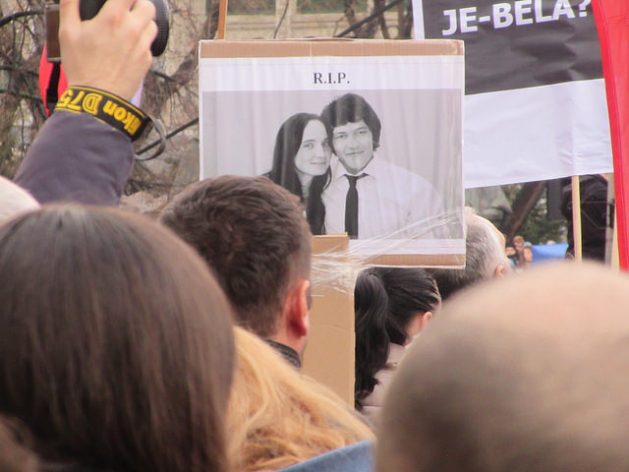 A protester in the Slovak capital, Bratislava holds up a picture of murdered journalist Jan Kuciak and his fiancée Martina Kusnirova. Credit: Ed Holt/IPS

BRATISLAVA, Jan 22 2019 (IPS) - “I’ve never known a time when it was as bad as it is now,” says Beata Balogova, the Vice-Chair of the International Press Institute (IPI) and Editor in Chief of the Slovak publication Sme. “In terms of what’s going on with journalists, we’re in a very unique period,” she adds.

Balogova explains during a break from editing the paper at its headquarters in the Slovak capital, Bratislava, how growing animosity towards journalists in Slovakia and other parts of Europe, is being increasingly violently expressed.

“It’s more intense now, there are verbal attacks, threats and the internet discussions on stories are much more aggressive [than before],” she tells IPS.

She says she is just finishing filing legal action against an anonymous person after she received online threats, including calls for a massacre at her newspaper—specifically a repeat of the 2015 one at French satirical publication Charlie Hebdo where two brothers opened fire in the newsroom and killed 12.

It is just under a year since the murder of Slovak journalist Jan Kuciak, who had been investigating links between the Slovak government and the Italian mafia, and Balogova says journalists are having to take all threats more seriously.

“What’s changed over the course of the last year is that in the past a lot of journalists didn’t pay much attention to anonymous threats or aggressions, but as they are seeing now, this kind of hate is being expressed in physical attacks on journalists,” she says.

The murder of Kuciak and his fiancee last February made headlines around the world and led to the resignation of the Slovak Prime Minister Robert Fico. It also raised questions about press freedom and the safety of journalists in the country and focused international attention on apparent serious shortfalls in press freedom in other countries in the region.

This month a new special investigative journalism centre has been set up in Slovakia in memory of Kuciak—the Jan Kuciak Investigative Centre—and is the first such centre in Slovakia.

But while its founders believe it can become an important investigative journalism hub facilitating cross-border investigations into global organised crime, it opens at a time when Slovakia continues to struggle with eroding press freedom, as well as growing and very serious concerns about not just declining press freedom in Eastern Europe, but a complete lack of it in some places, even in European Union (EU) member states.

Romania has taken over the EU presidency this month at the same time it has been criticised for serious shortcomings in press freedom. In Hungary, critics say Prime Minister Viktor Orban and his ruling Fidesz have virtually liquidated all opposition media, and the Polish ruling party is, according to critics, systematically doing the same.

There remain concerns about the Czech media being controlled by Prime Minister Andrej Babiš and his business associates, as well as the President’s openly hostile attitude to reporters. There have also been massive protests in the last few weeks in Serbia against President Aleksander Vucic and his ruling Serbian Progressive Party, in part over a lack of press freedom.

Meanwhile, just last week a court in Montenegro sentenced investigative journalist Jovo Martinovic to 18 months in prison on charges of drug trafficking and criminal associations. He maintains his contacts with criminals were part of his investigative work and that the case against him was politically motivated and press freedom advocates said his sentence had been handed down as a warning to other journalists in the region.

“The ruling will have a chilling effect on other journalists in the region – they will think that if they infiltrate the mafia and work with them, they need to fear not just the mafia but the government of their own country too,” Pauline Ades-Mevel of media freedom watchdog Reporters Without Borders (RSF), told IPS.

Media watchdogs like RSF as well as international organisations such as the European Commission, have highlighted declining press freedom across the region in recent years.

Poland, Hungary, Slovakia, the Czech Republic and Serbia have all fallen significantly in Reporters Without Borders’ press freedom rankings in the last few years amid concerns over authoritarian governments’ use of legislation, taxes, takeovers, forced closures and, some believe, even security service surveillance, to try and silence critical news outlets.

Meanwhile, public denigration of individual journalists and media by politicians have helped fuel what some describe as a “hostile environment” for journalists and encouraged verbal and physical attacks on them.

“The rhetoric from certain politicians has certainly played its part in the [increased] number of attacks on journalists,” Slovak journalist and founder of the Jan Kuciak Investigative Centre, Arpad Soltesz, told IPS.

One of the latest cases of violence against a journalist was an attempt to break into the apartment of investigative reporter Milan Jovanovic on Dec. 30—just weeks after his home in Belgrade, Serbia, had been burnt down after someone threw a Molotov cocktail into it. His requests for police protection after the first attack had not been answered.

The response of Vucic—who dismissed the attack as ‘just a burglary’—and the court ruling in Montenegro is typical, said Ades-Mevel, of governments only paying lip-service to international bodies over media freedom commitments. Both countries are pursuing accession negotiations with the EU.

“These are examples of how politicians can pretend to the EU that there are improvements to the rule of law and press freedom, but that the reality is different,” she said.

But while the situation looks grim in many countries, their relations with Brussels could provide a way of effecting change and improving the environment for journalists and media.

“It is important that the governments in Serbia and Montenegro understand they are under scrutiny. Pressure needs to come from outside for governments to clear up from the inside,” said Ades-Mevel.

She added that if action were taken against existing EU members over dwindling press freedom, it would send a strong signal to those hoping to join the bloc.

Earlier this month, the European Parliament (MEPs), agreed to back proposed measures to cut funding for member states where the rule of law, including press freedom, was seen to be undermined. They will come into force if backed by EU member states.

But governments, such as those in Poland and Hungary, have brushed off concerns over media freedom in the past, pointing out examples of critical news outlets as evidence of healthy media plurality.

“Orban has often used the argument that ‘look, there is media plurality, there are over 300 media outlets that can be described as opposition’. But these are normally small and don’t have a national reach,” says Balogova.

“What [Hungarian Prime Minister Viktor] Orban and his oligarch friends have actually done is ….. changed the public service media into an extended branch of the cabinet office. There is coordinated news production, there are weekly meetings where bosses of the pro-Orban media meet and set the news agenda. It is the worst nightmare version of what the communists tried, and failed, to do, and now Orban has done it to perfection,” she adds.

Jelena Kleut, Assistant Professor at the Department of Media Studies at the University of Novi Sad, in Serbia, told IPS: “We may be already past the point of no return here. So much has been done to weaken press freedom in Serbia, not just the attacks on journalists but the ruling party gaining control of the media, so I’m not sure if even EU pressure could really change anything.”

Other journalists believe that third-sector organisations hold the key to creating a less hostile environment for journalists to work in.

Pavla Holcova, a prominent Czech investigative journalist, told IPS: “Politicians have been involved in creating a hostile environment for journalists [but] we, as journalists, can’t do very much to stop them [verbally attacking journalists]. We need civil society to stand up and do that for us, to try and get politicians to change.”

However, few people are expecting the environment for journalists to change anytime soon in the region, and some are fearing the worst.

“It was just pure luck that Milan Jovanovic was not in his house at the time it was set on fire. I hope no journalist gets killed but with the frequency of attacks we are seeing now it is something that could happen,” said Kleut.