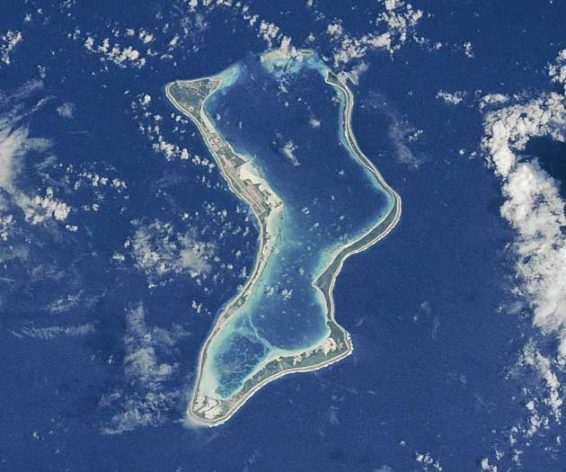 Diego Garcia island, which hosts a United States military base in the Indian Ocean. (Photo: NASA)

UNITED NATIONS, Feb 28 2019 (IPS) - Mauritius has scored a victory over Britain at the International Court of Justice (ICJ) in a case involving the decolonisation of the strategically important island of Diego Garcia that is home to a United States military base.

The ICJ said on Monday that Britain must give up to Mauritius control of the Chagos Archipelago where the Indian Ocean military base is located on the Diego Garcia island.

The opinion issued in The Hague by the court’s majority that included Judge Dalveer Bhandari of India said that the decolonisation of Mauritius “was not lawfully completed” when it attained independence because Britain carved away the Chagos Archipelago from Mauritius and retained control of it.

The opinion handed down by the majority of 13 judges said Britain “is under an obligation to bring to an end its administration of the Chagos Archipelago as rapidly as possible.”

The sole dissenter was American Judge Joan E. Donoghue. Britain is not represented on the bench after it withdrew the nomination of Judge Christopher Greenwood for re-election in 2017 when he could not get a majority of the votes in the General Assembly against Bhandari.

The court gave the opinion, which is non-binding, at the request the United Nations General Assembly made in a 2017 resolution.

Vehemently opposed by the US and Britain, the resolution received the vote of 94 countries while 15 voted against it and 65 abstained.

Britain has opposed the referral to the court saying it was a bilateral matter with Mauritius and indicated it would reject it.

There is unlikely to be any challenges to the US Diego Garcia base from Mauritius, either.

“We are not asking for the dismantling of the base”, Prime Minister Pravind Jugnauth Mauritian said after the ICJ opinion, according the Mauritian newspaper L’Express.

It reported that he did not want to reveal the next step that his country was going to take but said he wanted Britain “to recognise the unity of Mauritius”.

Britain cut off the Chagos Archipelago from Mauritius in 1965 before granting it independence in 1968.

The people living on Diego Garcia were forcibly removed from there by the colonial administration and it was leased to the US, which set up its strategic Indian Ocean military base on the island.

About 50 countries gave the court written statements, some against Britain and other in support of it.

Vishnu Dutt Sharma, the Legal Adviser of the External Affairs Ministry submitted India’s statement that said that the process of decolonisation was not completed because Britain had not complied with UN resolutions for it.

In the 1970s and 1980s India had vehemently opposed the US base in Diego Garcia.

Then-Prime Minister Indira Gandhi called the base 2,000 kilometres from India as a threat to India.

Since then the strategic environment and India’s interests have changed due the rise of China and the threats to navigation from piracy. India is now developing close defence ties with the US and toned down its rhetoric.

When the resolution to refer matter to the court was taken up at the UN in 2017, India’s Permanent Representative Syed Akbaruddin said that while supporting the position of Mauritius as “a matter of principle” to uphold the process of decolonisation and the respect for sovereignty of nations, “India shares with the international community, security concerns relating to the Indian Ocean”.