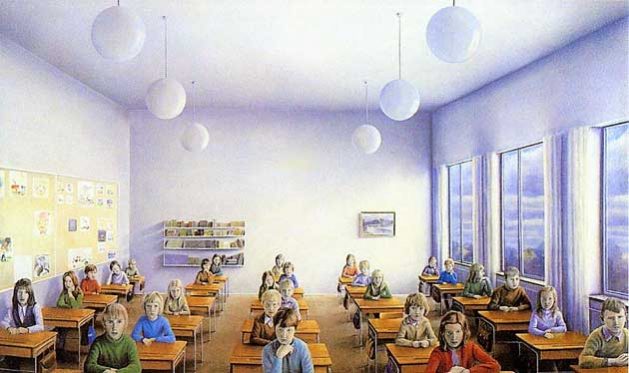 STOCKHOLM / ROME, Mar 4 2019 (IPS) - I assume it was the Swedish author Stieg Larsson´s Millenium trilogy (2005-2007) that generated the popularity of Scandinavian Crime Fiction, as well numerous movies and TV-series that followed in its wake. A typical Nordic Noir novel takes place within a gloomy landscape of dreary towns, or a semi-deserted countryside, where under the thin surface of an apparently well-ordered society, murder, misogyny, rape, racism and international crime syndicates are thriving.

As a Swede with my roots in a sleepy provincial town where nothing sinister seemed to happen I was inclined to consider Nordic Noir as some kind of Scandinavian magic realism, quite removed from Swedish everyday life. However, reality seems to be changing. In Sweden, as well as in the rest of the world, men are losing their traditional hold on power, as well as occupations that once craved more physical strength than brain power quickly are disappearing, making a woman just as capable as a man to manage any branch of human activities. A development that makes several young men bewildered and foster feelings of powerlessness and misogyny.

During a brief visit to my hometown I recently had a cup of coffee in one of the cafés and became involved in a discussion with one of the locals who use to hang around there. He was a retired police officer and told me:

– Things are changing fast around here. We are now getting our fair share of drug pushers and violent crime. Criminals are better connected, have more money, improved mobility and they actively recruit young guys around here. Youngsters who do not know anything, have dropped out of school and thus cannot get a decent job. They believe through crime they might become somebody, earn money and gain some respect. Most of them are as lost there as they were in school.

I hope he did not talk about any of my former pupils. I had for some years worked as a high school teacher in my hometown. When I made my first stint as teacher not one of my pupils had dropped out, though when I twenty years later returned to the same school, five boys and one girl disappeared from my classes during their first year. Something had happened, but I was unsure of how and why.

In Sweden, women in 2006 surpassed men in educational attainment and since then the gender gap has been widening. In 2016, 48 percent of Swedish women had at least two years of tertiary education, while the corresponding level for men was 35 percent. Gender ratio for applicants to higher education was 60 percent women and 40 percent men.1 PISA2 results from 2012 demonstrated that school performance of Swedish boys was considerably lower than that of girls and this gap was bigger than in any other OECD country. It was speculated that Swedish boys’ extensive computer gaming stole time from their homework. The situation was described as a national crisis and Swedish school policies are currently being overhauled.

In virtually all countries and economies girls do on average outperform boys in reading. Even if gender differences in science performance tend to be small, the share of top performers in science and mathematics is generally larger among boys than among girls. However, with every year this tendency is changing. Even if Finland currently is the only country in which girls are more likely to be top performers in science, other countries are approaching the same condition, while in Finland, Macao, Albania, Macedonia, Georgia, Jordan, Malaysia, Qatar and Trinidad/Tobago, girls scored higher than boys in mathematics.3

In the United Arab Emirates where some earlier barriers to girls schooling have been removed, they now out-perform boys at all levels and across all subjects, while in higher education, women make up 71 percent of graduates. Across the Emirates boys are dropping out of secondary school at rates of up to 20 percent in a single year. This trend has been explained by the fact that boys view connections in pursuit of employment opportunities as more potent in achieving social and economic success, while women consider education as a means to gain social freedom and influence.4 However, there are indications that boys school dropout is becoming a globalized trend. In the Caribbean region, boys´ dropout rate is generally 20 percent higher than the one for girls and similar trends are apparent in the entire LAC region.5 In countries like India, Senegal, the Gambia, Bangladesh, Mongolia and Nepal, where there were far fewer girls than boys enrolled in secondary school in 2000, the situation had by 2016 been reversed, leaving boys further behind than girls.

Does it matter if more boys than girls drop out of school, and/or to a lesser degree attend higher education? I asked the retired police officer if he thought boys were more inclined to commit crimes than girls:

– Without doubt, he answered. If a girl ends up in crime it´s due to her background, her earlier experiences and not so much because she had left school too early. With boys it´s different. The fact that they are out of school too early makes them inclined to commit crime. I think that for some of them it´s a status thing, if they fail with everything else they can at least succeed in crime.

The modern world increasingly requires specific knowledge and skills, making people with limited schooling ever more marginalized. The risk of becoming poor, socially excluded and having poor health, as well as being trapped in delinquency is dramatically higher among youth who exit education before having reached an upper secondary/high school diploma. The old police also appeared to be correct about girls and crime – research indicates that much fewer girls than boys are trapped in crime due to school dropout.6

For example, in Sweden high school dropouts are much less likely to be able to support themselves from a regular income. They have a mortality risk three times that of graduates, and are five times as likely to have been sentenced to prison by the age of thirty. Furthermore, dropouts tend to be inhibited by the social bonds the school and/or a steady job may provide and instead find security in criminal bonding. They become frustrated when aspirations cannot be fulfilled due to their miserable socioeconomic status. A recent Swedish Government report pointed out school failure as the single most important predictor for becoming a member of the NEET group, i.e persons “Not in Education, Employment or Training.” In EU countries the numbers of NEETs are estimated to 15 percent of people between 15 and 29 years of age. According to the police officer I met it is among this group of people criminals are recruited.

While I after my meeting with the retired police officer was driving home through the dark Swedish forest I imagined that if nothing was done to address men´s feelings of powerlessness, Nordic Noir could soon shift from being magic realism to becoming a description of an actual, global reality.

1 https://english.uka.se/
2 OECD´s Programme for International Student Assessment (PISA) is a worldwide study evaluating educational systems by measuring 15-year-old school pupils’ scholastic performance on mathematics, science, and reading.
3 http://www.oecd.org/pisa/
4 https://www.thenational.ae/there-are-many-reasons-why-boys-drop-out-of-school-1.687412
5 https://gemreportunesco.wordpress.com/2018/07/04/promoting-changes-in-gender-norms-in-latin-america-why-boys-education-matters/
6This and much of the following is based on Bäckman, Olof (2017) ‘High School Dropout, Resource Attainment, and Criminal Convictions’. Journal of Research in Crime and Delinquency, No. 54.