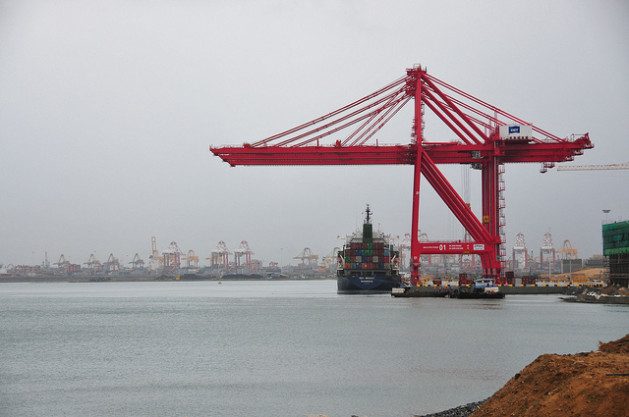 The harbour expansion in Colombo seeks to tap into the lucrative Indian shipping trade, with Chinese help. Credit: Amantha Perera/IPS

ROME, Apr 3 2019 (IPS) - Fifty years ago China was a poor country with little influence in the international sphere and without even a seat at the United Nations. Since then rapid economic growth in China has made it an economic powerhouse that increasingly plays a leading role on the world stage as a trade partners as well as a source of investment.

China’s development trajectory has been much different from most other developing countries which have been often been buffeted by political and economic problems and have failed to grow at anywhere near their potential.

In the first of this two part article we would like to explore how best developing countries can benefit from the ongoing and planned flow of Chinese investments into the country. In the second part we will look at some of the key element of China’s development experience and, see what lessons we can draw for policies and programmes.

The most iconic and discussed manifestation of China’s increased economic and political clout is the Belt and Road Initiative that aims to link China with markets in Europe and Asia.

The impact of Chinese investments is likely to be enormous and transformational in developing countries, especially in those countries that have been stuck in a trap of slow growth and low investment. This is a huge opportunity but in order to maximise its benefits it is essential that these investments are well managed and regulated.

The Initiative is largely about improving trade and logistics. At the same time, major investments are also being made in mining, manufacturing, agriculture and services – both for export to the Chinese markets as well as for sale in domestic markets. These investments are being made in both developed and developing countries.

However, their impact is likely to be enormous and transformational in the latter, especially in those developing countries that have been stuck in a trap of slow growth and low investment. This is a huge opportunity but in order to maximise its benefits it is essential that these investments are well managed and regulated.

Most Chinese firms investing overseas tend to be middle to large enterprises. Many are state owned, or subsidiaries of state owned companies, and, as such, enjoy good government connections and backing.

These factors give them superior bargaining power vis-a-vis local counterparts and there is risk that the terms of agreement may be tilted in their favour. Such risks are particularly acute in countries where counterpart local enterprises tend to be small with limited financial and administrative skills.

There is an urgent need for laws, regulation and guidelines that ensure that contracts and agreements signed are fair and equitable. This is critical for all sectors, but especially so for activities such as mining, which require massive investment and long gestation periods, where agreements can be for decades.

A number of critical aspects require public oversight including royalty payments and financial parameters, such as interest rates, depreciation rates and insurance fees.

There is also a need to ensure that prices charged for the output of Chinese firms sold in local markets are fair and within reach of domestic consumers;  that there is no “transfer pricing” in the case of exports – this is a practice where companies sell at low prices to parent companies overseas in order to reduce profits and tax liabilities, while at the same time reducing the inflow of foreign exchange into the host country; that taxes, duties and other levies are fully paid in time; that negative environment impacts are mitigated and, when necessary, remedial actions are put in place; that workers are paid fair wages and that essential services such as medical assistance and education are provided to them; and that current land owners, farmers and tenants are not displaced from their lands and houses.

It may appear that these conditions are harsh and risk alienating Chinese investors.  However, Chinese investment should not be simply an opportunity to make a quick return but as a long-term partnership that is based on mutual benefits that are shared, also with workers.

These conditions, including on transfer pricing, are common for transnational investors in most developed countries and in these countries Chinese companies have no problem adhering to them.  There is no reason that similar condition are not set in developing countries and that Chinese firms should comply with them.

Moreover, over the last couple of decades, under pressure from consumer lobbying, boycotts and law suits in their countries of origin, many US and European companies, including the large multinationals, are increasingly conforming to such laws and regulations.

Many of them now also have significant Corporate Social Responsibility programmes. Chinese companies, if they expect to complete in the medium to long-term with Western corporations, must be prepared to do the same.

It is Government’s prerogative and duty to make laws, regulations and guidelines to manage overseas investment.  However, such laws are notoriously difficult to implement in developing countries with limited governance capacities.

It will be more so in the case of Chinese investors which, as mentioned above, tend to be big and well connected.

Moreover, it is unlikely that NGOs, pressure groups and civil society groups in China will take it upon themselves to lobby against unfair trade or manufacturing operations of Chinese companies in other countries, as happened in the case of US and Europeans companies.

In this situation, much responsibility rests with the civil society, the press and the judicial system in developing countries.  These institutions need to take up the challenge.

This will not be easy and help would be required from the international development community. At political level, the UN and other official agencies need to help governments to daft laws and regulations; and international NGOs, lobby groups and consumer associations will need to create and help counterpart organizations in developing countries.

However, the most difficult hurdle will be for Governments in developing countries to start seeing civil society organizations, the press and the judicial systems as key partners in the development process and not as impediments to trade and financial partnerships.