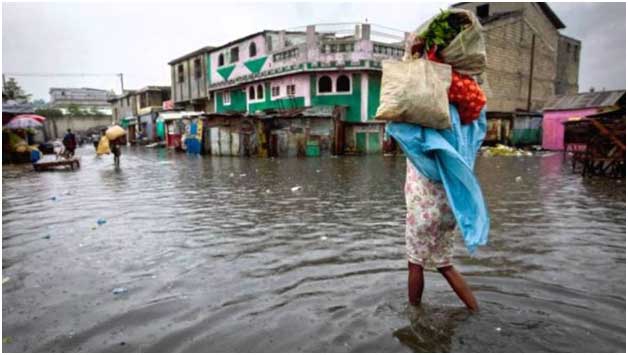 A key foundation to promoting sustainable development is thus strengthening resilience. We know that the development trajectory is not linear. Shocks of many different types disturb this path, and vulnerability to these shocks can slow down (or even reverse) progress. Resilience is the ability to return to a predetermined path of development in the shortest possible time after suffering from an adverse shock.

For countries in the Caribbean, the challenge of strengthening resilience is particularly acute as nations suffer recurrent extreme weather-related events. Countries are continuously struggling to rebuild in the wake of the economic, social, and environmental damages inflicted by frequent exogenous shocks, such as tropical storms—storms which climate scientists have warned us are only getting wilder and more dangerous due to global warming.

This makes the probability of distribution over intensity of shocks one with “thicker tails” which in turn makes insurance more complex and expensive. As a recent IMF report found, “natural disasters occur more frequently and cost more on average in the Caribbean than elsewhere—even in comparison to other small states.” Since 1950, 324 disasters have taken place in the Caribbean, inflicting a loss of over 250,000 lives and affecting over 24 million people.

This #GraphForThought uses data from the International Disaster Database EM-DAT to look at the damages caused by storms in the Caribbean during the period 1963-2017. As the graph cycles through time, we see countries repeatedly experiencing storms.

Each grey dot represents a country’s loss in property, crops, and livestock due to total storm damages in a given year – expressed as a percentage of its national GDP (using GDP from the year before the storm).*

On average over time, we can see that countries in the Caribbean suffer yearly losses due to storm damages equivalent to 17% of their GDP (for years that they were hit by storms). Of course, this varies greatly across nations both due to the severity of storms as well as the size of countries’ GDP—ranging from an average loss of 1% in Trinidad and Tobago to an average loss of 74% in Dominica. In 2017 alone, Dominica lost the equivalent of 253% of its GDP (during Hurricane Maria). 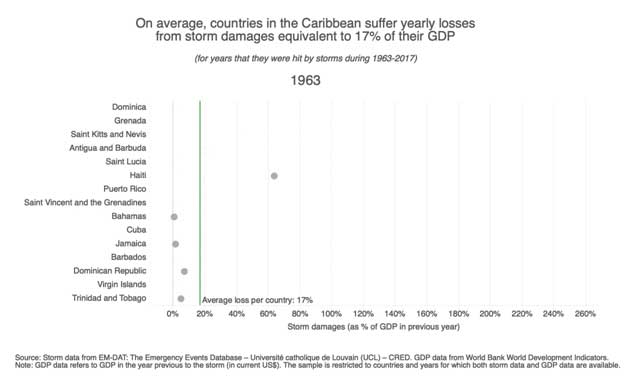 This was just two years after it lost the equivalent of 92% of its GDP (during Hurricane Erika). These losses are compounded by losses resulting from other extreme natural events, such as earthquakes, floods and droughts.

The repercussions from these damages have long-term consequences at the national level. A recent cross-country study on the impact of cyclones on long run economic growth found that impacts on GDP persist as much as twenty years later.

Moreover, they find that “for countries that are frequently or persistently exposed to cyclones, these permanent losses accumulate, causing annual average growth rates to be 1-7.5 percentage points lower than simulations of “cyclone-free” counterfactuals.”

Thus, developing resilience to the repeated shocks faced by countries in the Caribbean is critical for ensuring their ability to pursue long-term growth. As the World Development Report 2017 argues “long-term growth is less about how fast one grows than about how often you trip along the way.”

The damage caused by extreme weather events can also lead to long-term consequences at the household-level. Using data on typhoons in the Philippines, a recent study found that in addition to the loss of durable assets, household income was reduced which is passed on through decisions to spend less on items such medicine, education, and high nutrient foods—decisions which may have long term consequences for the development of human capital.

In order to mitigate the serious consequences of shocks on development, we need to focus on strengthening resilience. The capacity of the countries in the region to strengthen the resilience of households will depend on the processes that allow households to make decisions that help them build their adaptation mechanisms.

Efficient, effective and flexible social protection systems to incorporate victims; early warning systems for disasters; investment in mitigation of environmental risks; and impact-resilient social services and infrastructure, are some of the ways through which governments in the region could build and strengthen resilience.

Moreover, in order to effectively strengthen resilience, we need to rethink how we evaluate it. Traditionally, economists have approached this notion from a perspective of ‘flows’ – such as GDP, consumption or income.

However, if we rely solely on this type of approach, efforts to strengthen resilience could take place at the expense of the depletion of the ‘stock’ of assets. For example, the recovery of GDP at the expense of natural capital.

Thus, if we truly believe that ‘sustainability is a constitutive element of development’, we need to move from an evaluation space defined by ‘flows’ to one that also includes a measure of ‘stocks.’ We need to think more broadly about the ‘wealth of nations’ by valuing not only their GDP but also their stock of natural, physical, human and social capital.

* Note: The sample is restricted to countries and years for which both storm data and GDP data are available.