Fifth World Forum on Intercultural Dialogue: Executive Director of the Geneva Centre refers to the pioneering role of the UAE in hosting in Abu Dhabi the historic visit of HH Pope Francis and the Grand Imam of Al Azhar His Eminence Ahmed Al-Tayib 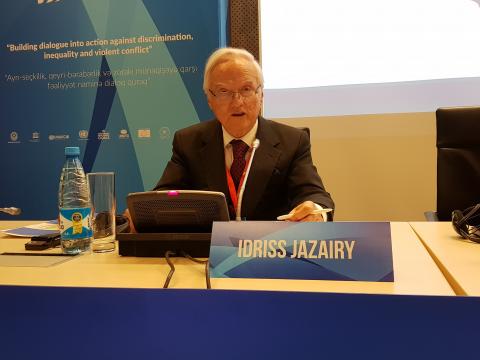 BAKU, Azerbaijan, May 3 2019 - (Geneva Centre) – At the Fifth World Forum on Intercultural Dialogue held from 2-3 May 2019 in Baku, the Executive Director of the Geneva Centre for Human Rights Advancement and Global Dialogue Ambassador Idriss Jazairy paid tribute to the inspiring role of the United Arab Emirates in hosting the historic meeting of 4 February 2019 between HH Pope Francis and the Grand Imam of Al Azhar His Eminence Ahmad Al-Tayib and which led to the adoption of the Joint Document on Human Fraternity for World Peace and Living Together.

Ambassador Jazairy made this statement at the High-Level Ministerial Panel on “Mobilizing Intercultural Dialogue for Concrete Transformative Action” of 2 May, that was chaired by the Minister of Culture of the Republic of Azerbaijan Abulfas Garayev and attended by high-level government officials from more than 30 countries.

Ambassador Jazairy stated that the Joint Document on Human Fraternity gives concrete expression to the “ideal of restoring the aspiration for a world living in peace and harmony.” Ambassador remarked that the Joint Document on Human Fraternity expresses the same ambitious ideas contained in the World Conference Outcome Declaration on “Moving Towards Greater Spiritual Convergence Worldwide in Support of Equal Citizenship Rights.” The latter was adopted as an outcome to the 25 June 2018 World Conference on religions and equal citizenship rights that the Geneva Centre organized with the support of the UN Secretary General Antonio Guterres.

During the 3 May panel debate on “Greater Spiritual Convergence for Equal Citizenship Rights” held as a breakout session during the Fifth World Forum on Intercultural Dialogue, a resolution was unanimously adopted by the participants endorsing the Joint Document on Human Fraternity and the World Conference Outcome Declaration.

The said resolution “welcomes the inspiring Joint Declaration of His Holiness Pope Francis and H.Em. Sheikh Ahmad Al-Tayyib appealing to decision-makers and societies to reject the hijacking of religions to incite ‘hatred, violence, extremism and blind fanaticism’, to cherish the ‘values of tolerance and fraternity that are promoted and encouraged by religions’ as well as to promote the concept of ‘full citizenship’ and reject the discriminatory use of the term ‘minorities engendering feelings of isolation and inferiority.”