The implementation of the Durban Declaration and Programme of Action (DDPA) key to encourage sustained international action against racism, say panellists at UN debate 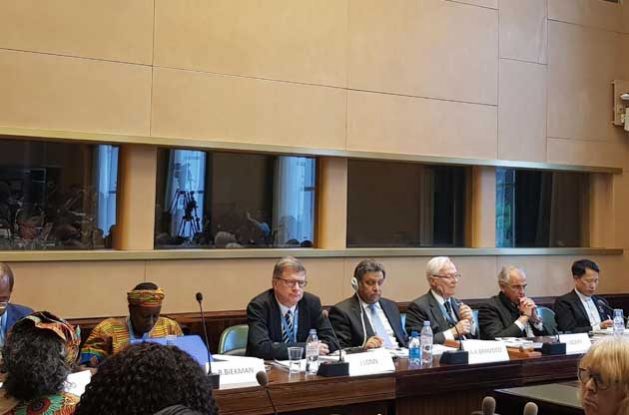 GENEVA, May 10 2019 - (Geneva Centre) – As a new deadly tidal wave of violence, hate speech and exclusion sweeps across the world, it is now high time for the international community to a joint stand against racism, racial discrimination and intolerance and to address the fundamental structural root causes of these scourges through the implementation of the Durban Declaration and Programme of Action (DDPA).

This was the key thread of the “Emergency Assembly on the Rise of Global Racism” that was held on 9 May at the United Nations Office in Geneva. The Assembly was organized jointly by the Geneva Centre for Human Rights Advancement and Global Dialogue, the World Against Racism Network and the Global Coalition for the International Decade for People of African Descent.

“We are gathered today to reach out, to revive public awareness and to warn against the worrying rise of extremist ideologies. They are taking openly aggressive forms particularly through Islamophobia, Afrophobia, anti-Arabism, Christianophobia and anti-Semitism. Innocent people in all parts of the world continue to suffer daily from this scourge one could describe as ‘social cancer,” the Executive Director of the Geneva Centre and moderator of the conference Ambassador Idriss Jazairy said.

The Executive Director of the Geneva Centre said that prejudice based on culture, fostering intolerance and promoting religious discrimination constitutes a denial of the enjoyment of human rights and fundamental freedoms. It was the antinomy of a culture of peace, tolerance and most of all of empathy in a spirit of human fraternity, he underlined to the audience:

“Although the DDPA was adopted 18 years ago, it continues to remain fully valid up to this day. It calls for a consolidated strategy to restore rights and dignity for all. Taking into account recent trends witnessed in New Zealand, Sri Lanka and California, we are challenged to counter this scourge. It is empathy and not ethnicity that creates a community and lays the foundation for sustainable and inclusive societies.”

Ambassador Jazairy likewise warned against compounded forms of racism such as those targeting women wearing headscarf in Europe who are discriminated both as Muslims and as women whose freedom of choice as to their own bodies is challenged. He appealed to decision-makers to apply the Outcome Declaration “Moving Towards Greater Spiritual Convergence Worldwide in Support of Equal Citizenship Rights” adopted by the 25 June 2018 World Conference on religions and equal citizenship rights that received personal endorsement by the UN Secretary-General Antonio Guterres.

He also drew the attention of the meeting to the historical event organized by the government of the United Arab Emirates on 4 February 2019 bringing together HH Pope Francis and the Grand Imam of Al Azhar His Eminence Ahmed-el Tayib who adopted the now famous document on “Human Fraternity for World Peace and Living Together.”

No country can claim to be free of racism, racism remains a global concern

In his keynote speech, the Ambassador and Permanent Observer of the African Union to UN in Geneva HE Ajay Kumar Bramdeo warned that the resurgence of global racism is taking more violent and aggressive forms “Trends of intolerance and xenophobia are increasing, both in intensity and scale, We must all recognise that no country can claim to be free of racism, that racism is a global concern, and that tacking it should be a universal effort” Ambassador Bramdeo said.

Ambassador Bramdeo underscored the importance of enhanced international cooperation to address all forms and manifestations of racism and appealed to all States to ensure the effective implementation of the DDPA. He appealed to the forthcoming meeting of the Group of Independent Eminent Experts to come to the “obvious conclusion that the DDPA continue to be one of the most important documents in the global fights against racism, racial discrimination and related intolerance.”

HM Dòwoti Désir-Hounon Houna II, Chair of NGO Committee for the Elimination of Racism, Afrophobia & Colorism underlined that the rise of Afrophobia and discrimination against people of African descent is on the rise in societies worldwide. The DDPA – she said- articulates methodologies to address these ‘social ills’. Decision-makers must therefore ensure the effective implementation of the DDPA and develop anti-racist policies to counter these scourges, Queen Hounon Houna II from Benin said in a video statement.

The Secretary at the World Against Racism Network and Secretary-General of the International Youth and Student Movement for the United Nations (ISMUN) Mr Jan Lonn thanked the wide-ranging audience for their interest in this crucial issue. He underlined the fact that this conference was being held in the UN, which was born after the anti-fascist backlash of the Second World War. It was highly symbolic as the DDPA now needed further support and action from UN member States for implementation at national level as well as within UN bodies such as the Human Rights Council, ECOSOC and the General Assembly. He also stressed the need for much greater awareness promotion in terms of a global campaign against racism.

The Executive Councillor of the Executive Council of the City of Geneva Mr Remy Pagani observed that the struggle against all forms and manifestations of racism and exclusion is a long-term challenge which has to be addressed resolutely. He recalled how dangerous it could be to be exclusively inward-looking and reject the Other. He mentioned that Geneva had a special responsibility in this regard, as historically, it has been for centuries a refuge for victims of persecution in other countries of Europe and today represents a city which is the humanitarian capital of the world. In conclusion, he stated that the commitment of all those present to promote justice, equality and peace was essential and invaluable.

The Chair of the Working Group of Experts on People of African Descent Dr Ahmed Reid referred to the Working Groups’ Thematic Report to the UN General Assembly on stereotypes. He added that it was a cruel paradox that in the year of the 70th anniversary of the Universal Declaration of Human Rights, racism, racial discrimination, afrophobia, xenophobia, nativism and related intolerance is continuing to prevail all over the world. He stressed the need to fight stereotyping of people of African descent through black criminalization and black profiling both of which contribute to racial violence. He concluded by proposing that racism be fought through a culture of encounter and dialogue and real empowerment of all segments of society.

The Chair of the Group of Independent Eminent Experts on the Durban Declaration and Programme of Action Ms Edna Roland shared with the audience the four major issues that the Group she chairs had identified. The first was the question of racist hate speech and its use or misuse by politicians to try to influence public opinion and hence the results of elections. The second consisted in considering and analysing and understanding racism as being a result of history, in particular colonialism. Thirdly, she observed that the Sustainable Development Goals do not mention the ethics and issues of racism which represent an impediment to development. She suggested therefore that national governments should include this in their national SDP implementation plans provisions concerning the implementation of the DDPA. Lastly, she stressed the need to develop a multi-year outreach programme to implement the DDPA including mobilizing NGOs and seeking new ideas to fight against xenophobia, racism and related intolerance.

Faith communities can strengthen the international community to end racism

Reverend Dr Jin Yang Kim, Coordinator of Pilgrim-teams for Justice and Peace World Council of Churches (WCC), said in his statement that faith communities must play an active role in countering the rise of global racism. Reverend Yang Kim highlighted that the WCC actively addresses racism and racial discrimination in collaboration with churches worldwide and undertakes pilgrim visits to countries in Asia.

“These pilgrim team visits will be informed about the status of relevant UN recommendations on racial discrimination prior to visiting countries. Such recommendations are those which have been issued by the Human Rights Council (OHCHR) under the Universal Periodic Review (UPR) mechanism, by the Committee on the Elimination of Racial Discrimination, and the UN Special Rapporteur on Racism, regarding the country to be visited,” Reverend Yang Kim stated.

In a video message by the UN Representative of the United Methodist Church and President of the Conference of NGOs in Consultative Relationship with the UN (CoNGO), Mr Levi Bautista warned against the aggressive display of hatred, racism and bigotry played out in different societies. He appealed to decision-makers and civil society representatives to join forces in dismantling and eradicating racism in all of its forms and manifestations.

“Racism, racial discrimination, xenophobia, and related intolerance all work, singularly and collectively, to diminish our common humanity. They thrive at the intersections of race, caste, colour, age, gender, sexual orientation, class, landlessness, ethnicity, nationality, language and disability,” Mr Bautista said echoing the main observations of the Ecumenical statement delivered by the Nobel laurate and Archbishop Desmond Tutu during the holding of the 2001 World Conference Against Racism, Racial Discrimination, Xenophobia and Related Intolerance held in Durban.

There was a general agreement that the world is witnessing a political tidal-wave of racism which was a shared concern. The rise of populist and nationalist parties in Europe and in the Americas was exploiting the hatred of the other by political parties to gain votes in national elections. There was acceptance of the fact that racism was not circumscribed to certain regions, but an evil of global proportions.

Therefore, it called not for grandstanding and holier-than-thy-neighbour attitudes but for joining forces from North and South, East and West, to counter and roll-back such trends. Furthermore, the conference deplored the absence of any reference to the DDPA in the SDGs of the 2030 Agenda for Sustainable Development of the UN and considered that national implementation plans should include such a reference. Finally, emphasis was put by the meeting on the implementation of a multi-year awareness promotion agenda and of addressing the issue of racism already at primary school level. 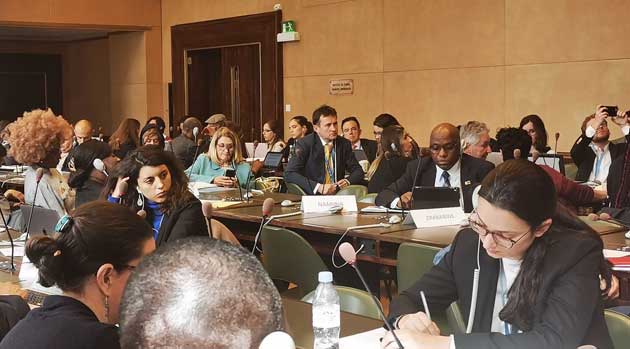 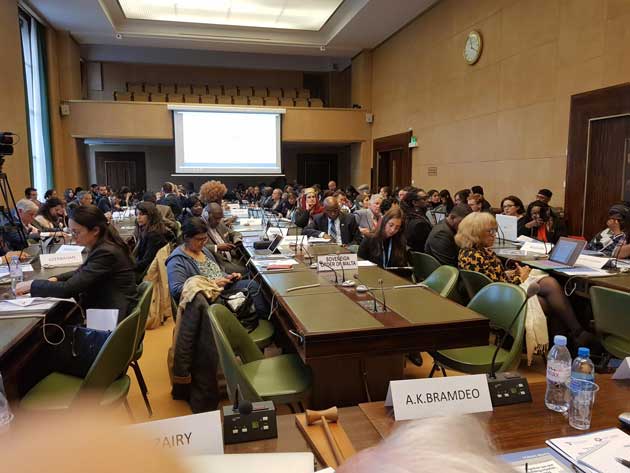