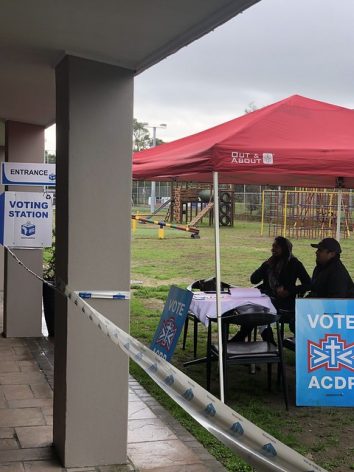 Millions of South Africans headed out in large numbers, some braving cold and wet weather to cast their ballot in the country's sixth democratic elections on May 8, 2019. Credit: Crystal Orderson/IPS

CAPE TOWN, South Africa, May 10 2019 (IPS) - Millions of South Africans headed out in large numbers, some braving cold and wet weather to cast their ballot in the country’s sixth democratic elections this week. The 2019 election was one of the most competitive and contested elections that also saw a whopping 48 parties on the national ballot—up 300 percent from a mere 10 years ago.

For years South Africa’s majority was excluded from this democratic right by the minority apartheid government and the first time they were able to vote was in 1994. The ruling African National Congress, ANC, has won every election since then and there was never any doubt that the ruling party will would again remain in power. However, it was the margin of victory that was key in these elections.

The ruling party received over 58 percent of the vote along with another mandate to rule the country for the next five years. The main issues for citizens in this election was more jobs, a better economy and an end to rampant corruption. For the ANC to keep momentum and make an impact, it will have to deliver on these issues over the next two years.

Senior Economist Dawie Roodt told IPS that the main issue now is what President Cyril Ramaphosa’s plans are for the economy and dealing with corruption. “Another issue we are watching is the appointment of the new cabinet and the ministers he will appoint in the key portfolios like finance. The challenges are daunting and there are a  few key priorities how is he going to deal with Eskom and some other economic issues like job creation and the state’s debt levels.”

A Mandate for Change
In this election, Ramaphosa needed a victory to turn the tide against corruption and service delivery protests. In 2014, the ANC won 62.15 percent of the votes, with the Democratic Alliance, DA, receiving 22.23 percent while new political kid on the block, the Economic Freedom Fighters, EFF, took 6.35 percent.

In 2014 voter turnout was at 73,48 percent and this week it dropped by nine percent to around 65 percent—with the decline coming as a surprise to many.

The lack of show at the polls indicates a disillusioned electorate, unhappy with the current state of politics. Ramaphosa will have to work hard to get the electorate to believe in the country again.

Economist Khaya Sithole told national radio station 702 Talk Radio that Ramaphosa needs to keep the momentum of the changes to the economy. “He has the 12-24 months to deliver on the promises of jobs and people will question him if he is going to do the right thing or not.”

Roodt says South Africans voted for Ramaphosa so that he can make the changes needed and there is renewed hope that he will announce a smaller and leaner cabinet to implement these changes.

“Ramaphosa promised us a smaller government and cabinet. I am however not too concerned around the size of the cabinet, I just want to see that we efficient people to be in charge, ministers are often also appointed because of their loyalties and not per se for the job they do,” said Roodt.

All eyes on Ramaphosa
Casting his ballot in Soweto on election day, Ramaphosa told a large media contingency that this year’s vote served to remind people of the 1994 elections.

“In 1994 our people were just as excited as this because they were heralding a new period, a new future for our country and today this is what I am picking up.”

The 66-year-old Ramaphosa added that the vote was also about confidence and about the future, admitting that the party had failed in some cases.

“Over the 25 years, we have achieved a great deal. We have not yet filled the glass. The glass is half full,” he said.
South Africans are desperate for a turn around. The extent of corruption under former President Jacob Zuma’s rule, have left many feeling hopeless, angry and disillusioned.

In recent years, South Africans have become poorer, struggling to support their families with a sluggish economy. With one in three people without jobs, there is growing desperation to see change. And all eyes are on Ramaphosa, who is under enormous pressure to save the sinking ship.

Ailing economy
And South Africans want the new ANC-led government to be decisive in its decisions to re-build a stagnant economy and create much-needed jobs.

The other headaches for Ramaphosa include:

Ramaphosa has set himself an ambitious task of attracting 100 billion dollars in new investments that he believes will kick start the ailing economy.

Ramaphosa will have to do some tough things, including cutting the number of ministries, reducing the massive government wage bill, and cleaning up corrupt state-owned entities, like Eskom.

Eskom is the largest utility in Africa yet it is also the albatross around Ramaphosa’s neck. The government has had to bail it out with millions of taxpayer’s dollars. The power utility has a debt burden of more than 28 billion dollars and rating agencies see this as one of the biggest risks to Africa’s most industrialised economy.

During Finance Minister Tito Mboweni’s Budget Speech in March, he outlined financial support of about five billion dollars to the cash-strapped utility over three years, with support totalling about 10 billion dollars over the next decade as part of the government’s rescue plan.

Roodt said that at the moment the agenda for Eskom is to basically “just survive”. “The dismal state of Eskom is that they are in debt and they need billions to just survive,” he said.

Roodt added he wanted to see action from Ramaphosa concerning Eskom’s excessive wage bill.
“There are far too many people being paid excessive wages and there are about between 20 and 30 000 to many people working there, we need to cut down and trim Eskom.”

Economists argue this is not enough. Ramaphosa will have to go ahead with the break up of the entity and will have to look at public-private partnerships—but the trade union federation may not support this.

This is part of the problem for Roodt. “Cutting the workforce will not be easy—unions are part of the tripartite alliance with the ANC, you will need strong political leadership and hopefully Ramaphosa will have the mandate.”

The tripartite alliance is an alliance between the ANC, the Congress of South African Trade Unions and the South African Communist Party (SACP). Traditionally the latter two parties have always stood with the ANC in elections. However, in 2017, the SACP contested the country’s municipal elections. For this week’s elections the SACP contested once again as part of the tripartite alliance.

All eyes will be on Ramaphosa, a seasoned negotiator who chaired the country’s constitutional-making process, to see how he handles this matter.

What now? Some of the tasks ahead…..

There are 400 seats in the national assembly and during the 2014 election, the ANC had 249 seats, down from the 264 seats it had from the 2009 election. In 2019 this is likely to be less, and at the time of print, the ANC had over 200 seats. This will mean that the ANC will have a majority to make the changes that are needed.

After a decade of former president Zuma’s rule, rampant corruption, maladministration and the high unemployment rate have created a ticking time bomb for the country. Ramaphosa wants to bring renewal to South Africa to ensure job creation and an end to rampant corruption.

He has promised this would be the major issues on his agenda. South Africans will have to wait and see whether he will be committed to this once he takes office at the Union Buildings in Pretoria in June.