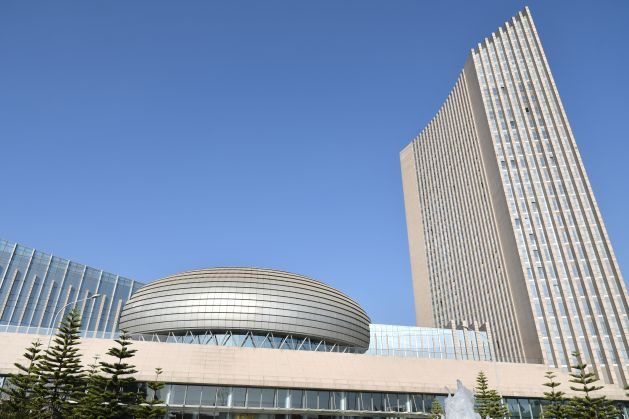 View of the Headquarters of the African Union in Addis Ababa, Ethiopia. Credit: UN Photo/Antonio Fiorente.

WASHINGTON DC, Jun 18 2019 (IPS) - On June 6, the African Union (AU) suspended Sudan from the 55-member group with “immediate effect.” The move came in response to a deadly crackdown on peaceful protesters in Khartoum, in which government forces, led by the paramilitary Rapid Support Forces (RSF), tore through a sit-in in the capital killing at least 108 people, and wounding hundreds. The AU’s decisive action has been widely applauded, but suspending Sudan is not enough.

The crackdown came amid stalled negotiations between the Transitional Military Council  (TMC) and opposition groups over formation of a civilian-led government following the April 11 ousting of former president Omar al-Bashir.

The AU had earlier called for a swift transition to civilian rule and threatened the TMC with sanctions if it fails to hand power to a civilian-led government.

To avoid further deterioration of the Sudan crisis, and to mark a shift from the Burundi precedent, the AU should take further measures beyond the suspension of Sudan, including speedily setting up of a commission of inquiry into human rights violations against protesters by government security forces under the control of the military council

These statements underscore the AU’s role in promoting democratic transitions, citizens’ rights to freedom of expression, political participation, and other associated rights. The Transitional Military Council’s blatant disregard of the AU’s initial calls, and of Sudan’s human rights obligations, represent a direct challenge to the authority and influence of the regional body as a critical platform for promoting peace, security and human rights on the continent. It is thus imperative for the AU and its agencies to take further steps to hold the leadership of the TMC accountable.

Sudan, a  signatory to the African Union charter since 1956, is also a party to important regional human rights instruments — notably the African Charter on Human and People’s Rights, which guarantees the right to peaceful protest, among other things.

On June 7, the African Commission on Human and Peoples’ Rights, which monitors compliance with the human rights charter’s provisions, also called for prompt investigations into the attacks on protesters and urged redress for victims and their families.

But the crisis in Sudan is a stark reminder that the road to full respect for human rights requires much more than agreeing to uphold human rights standards.

The AU has struggled in the recent past to find solutions to human rights situations in member countries and to consistently enforce sanctions. In just one example, In 2015, the AU Peace and Security Council authorized the deployment of a 5,000-strong African Prevention and Protection Mission in Burundi to protect civilians.

The move came after an attack on military installations around the capital, Bujumbura, led security forces to kill scores of civilians. But the Assembly of Heads of State ignored the authorization and later overturned it, leaving the crisis in Burundi unresolved.

To avoid further deterioration of the Sudan crisis, and to mark a shift from the Burundi precedent, the AU should take further measures beyond the suspension of Sudan, including  speedily setting up of a commission of inquiry into human rights violations against protesters by government security forces under the control of the military council.

This could be done in collaboration with the African Charter on Human and People’s Rights, as provided by Article 19 of the AU Protocol on the Peace and Security Council. It should also consider additional measures such as targeted sanctions against leaders of the military council  implicated in the attacks under Articles 23 and 30 of the Constitutive Act of the African Union.

The  African Charter on Human and People’s Rights, the union’s flagship rights body, has previously carried out fact-finding missions and commissions of inquiry in similar situations. Its decisions on these situations have built important principles that could be applied to Sudan.

As the search for a negotiated settlement continues in Sudan, the AU should make accountability for crimes and human rights violations, which underpin the crisis, front and center of its intervention. This would be an important signal of the AU’s increasing commitment to justice and accountability for violations of its norms and values.