Desperation and Fear on the Mexican Border

Ariana Sawyer is with the US program at Human Rights Watch 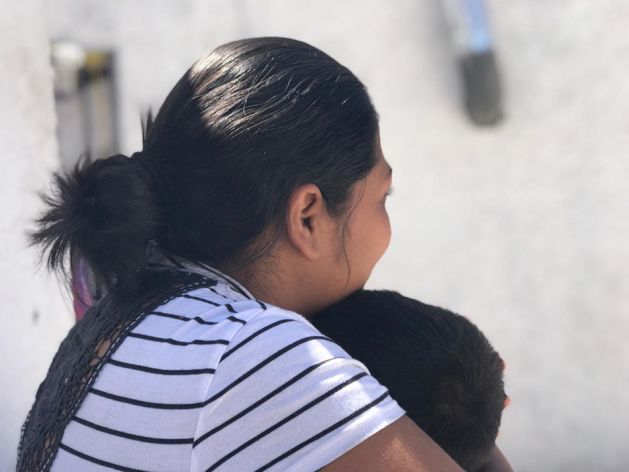 “Carmen S.” holds her son, 3, at a shelter where they were staying in Ciudad Juárez, Mexico, May 2019, after being returned to Mexico under the Trump administration’s “Migrant Protection Protocols.” Carmen told Human Rights Watch that she was thinking of trying to cross illegally but was afraid of losing her children. © 2019 Clara Long/Human Rights Watch

SAN FRANCISCO, California, US, Jul 18 2019 (IPS) - On the 2,000-mile journey from San Pedro Sula, Honduras, to the US-Mexico border, the 20-year-old asylum seeker and her 16-year-old brother took turns sleeping every time they managed to catch a ride or get on a bus. She told me they kept each other safe that way.

The asylum seeker – I’ll call her Gloria because she was afraid to have her real name published – said she fled Honduras with her little brother after a member of a gang there stalked and threatened to kill her for refusing to be his girlfriend.

When the siblings turned themselves in to US Border Patrol near El Paso, Texas, in mid-April, agents separated them.

“Where are you taking him?” she asked.

The US government is failing in its responsibilities toward asylum seekers by sending them to Ciudad Juarez and elsewhere in Mexico, where meaningful oversight is impossible.

“He’s going to a better place than you,” she said an agent replied. But as we have found, Gloria’s brother, like other children in Border Patrol detention, certainly was not going to a good place.

Gloria said she spent six days in Customs and Border Protection custody without sunlight in an overcrowded cell with no shower or ready access to water. She was then placed in the Trump administration’s Migrant Protection Protocols (MPP) or “Remain in Mexico” program and sent alone to Mexico. She is expected to wait there for the duration of her asylum case, which could take months or years. She will be allowed to travel to the US only to attend immigration court hearings.

When I interviewed her in the border city of Ciudad Juarez, Mexico, in May, she hadn’t heard from her brother in weeks. She seemed more worried about him than anything else, but her own situation was dire.

Like the other asylum seekers we interviewed about the cruel and chaotic MPP program, Gloria found it hard enough to survive, let alone pursue her asylum case.

The shelter where she spoke to me has a limit on the number of days she can stay. Shelter operators explained they don’t want to kick vulnerable people out, but they feel they must give priority to those US authorities have most recently sent to Mexico, since they’re the most disoriented. A sign in front of a migrant shelter in Ciudad Juárez, Mexico, informs asylum seekers that they have no space, May 2019. This shelter is located in a particularly dangerous neighborhood, and asylum seekers there said they were afraid to leave, even to go to the store just blocks away. © 2019 Clara Long/Human Rights Watch

One shelter operator broke down and cried when we asked why one family was told that day would be their last.

Asylum seekers in need of shelter outnumber available beds in Ciudad Juarez 11 to 1, though one Mexican official told me that 20 to 30 percent of those waiting had already left with plans to try to cross the border between the ports of entry, probably in more remote, dangerous areas. Meanwhile, many of those in the program say they have family in the US to whom they could be released.

Compared to some of the most recent rounds of asylum seekers sent to Mexico whose preliminary immigration court hearings were scheduled for the summer of 2020, Gloria is somewhat better off. Her first hearing is in August.

As long as she was allowed to stay at the shelter, she said, she was avoiding going outdoors. Mexico is  experiencing record levels of murders – the highest number of intentional homicides since the country began keeping track in the late 90s – which have hit Ciudad Juarez and other Mexican border towns particularly hard, and migrant women there are especially vulnerable, US federal asylum officers have said.

“I know that in any moment something could happen to me,” Gloria said.

We initially decided to visit Ciudad Juarez after migrant rights advocates expressed the need to shine a light there, describing the city as a “black hole” to which asylum seekers were being sent – out of sight, out of mind.

And when one Congresswoman recently sent staff members to Ciudad Juarez to monitor the program, a  Customs and Border Patrol  official leaked some forms her office sent the government agency containing sensitive information about individual asylum seekers and accused her of trying to undermine the Border Patrol.

The US government is failing in its responsibilities toward asylum seekers by sending them to Ciudad Juarez and elsewhere in Mexico, where meaningful oversight is impossible. But those concerned about this mistreatment can do their part to end it. They can call on their members of Congress to end the funding for the program, oppose the separation of families, strengthen the asylum system, and pursue alternatives to detention.

Oscar Alberto Martinez Ramirez and his daughter, Valeria, reportedly died trying to swim across the Rio Grande because they were disheartened by the barriers to asylum put up by the Trump administration at ports of entry.

Lawmakers need to rein in an increasingly abusive border agency.