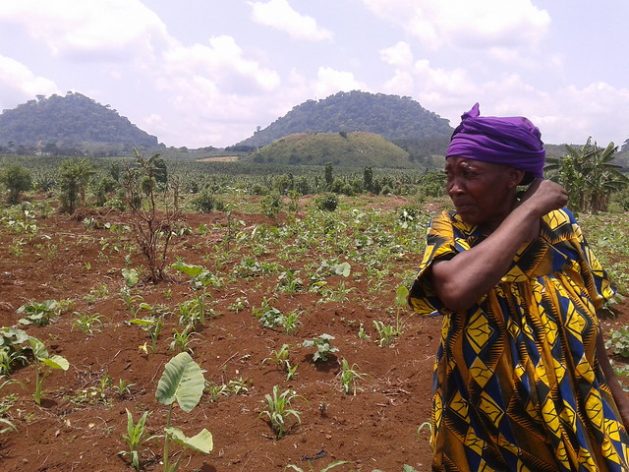 Ndomi Magareth, sows bean seeds on her small piece of land in Njombe a small town in the coastal Littoral Region of Cameroon. Pan-Africa Bean Research Alliance is a consortium of 30 bean-producing countries in Africa and its improved bean varieties has helped transition the legume from a subsistence crop to a modern commodity. Credit: Monde Kingsley Nfor/IPS

UNITED NATIONS, Jul 2 2019 (IPS) - As the weather continues to change and land becomes degraded, the socio-economic security implications are vast. In an effort to tackle these issues, climate-smart agriculture is quickly gaining traction around the world.

According to the United Nations Convention to Combat Desertification (UNCCD), 12 million hectares of productive land become barren every year due to desertification and drought alone representing a loss of production of 20 million tons of grain.

Not only is this an economic blow to almost 80 percent of the world’s poor people who rely on agriculture for their livelihoods, but hunger levels are also already rising globally.

Such challenges will only be compounded as we must increased food production by 70 percent by 2050 in order to feed the entire world population.

The need for sustainable, climate-smart agriculture is thus clear.

One practice that is gaining momentum is the development of improved, resilient crop varieties which help ensure both food and economic security.

“In light of changing rainfall patterns where the old varieties which are drought-susceptible can no longer be produced under drought conditions, the new varieties which are developed for resilience have made a complete difference by bringing more beans on the table for food security as well as more beans for the market to bring income to the farmers,” one of Pan-Africa Bean Research Alliance (PABRA)’s bean breeders Rowland Chirwa told IPS.

Syngenta Foundation for Sustainable Agriculture’s Senior Scientific Advisor Vivienne Anthony spoke of the importance of connecting science to the realities on the ground.

“The community of scientists need to connect with the entrepreneurs and people that are investing in the future here in Africa and to work together to improve crops, create jobs, create markets and not sit back as scientists. They need to engage with the business,” she said.

From Theory to Practice

In collaboration with the University of Bern, the Syngenta Foundation has been working to improve Eragrostis tef, commonly known as teff—one of the most important cereals in Ethiopia where over 80 percent of the population live in rural areas.

The seeds have high protein levels and are much better adapted to drought conditions which is an increasingly common experience in the East African nation.

However, the teff plant produces low yields and harvests are not keeping pace with Ethiopia’s increasing population.

Demand and access to markets is also essential, Anthony noted.

“Designing a new variety is no different to designing anything somebody is going to buy. It involves understanding the marketplace, and who wants to grow it, use it, eat it,” she told IPS.

“The way to address some of the problems and challenges of agricultural sustainability in Africa is about encouraging markets to flourish that drive opportunity, innovation and entrepreneurship.  We fundamentally believe in market-based approaches as a way of trying to meet the Sustainable Goals, finding a business rationale where everybody wins and it keeps going,” Anthony added.

Similarly, PABRA is a consortium of 30 bean-producing countries in Africa and its improved bean varieties has helped transition the legume from a subsistence crop to a modern commodity.

Beans are among the most consumed and widely grown legume in Africa, taking up over 6 million hectares of land. Eastern Africa sees the highest consumption of beans with people eating as much as 50-60 kilograms every year.

However, one study found that without any adaptation strategies, the yields and nutritional value of common beans will dramatically decline by 2050.

“We have been following more of a preemptive breeding approach where we know the climate is changing and at the same time the needs of the people we are trying to provide products with are also changing,” bean breeder Clare Mugisha Mukankusi told IPS.

Chirwa echoed similar sentiments, stating: “We look at regionally in Africa and see which are the major market classes we can focus on and look at the capacity of our national partners…and develop varieties that are responsive to the environmental needs, human consumption needs, and market demand needs using a Demand Led Breeding (DLB) approach.”

In Rwanda, improved bean varieties increased yields by 53 percent and household revenue by 50 dollars. Without the improved beans, 16 percent more households would have been food-insecure, PABRA found.

The International Center for Tropical Agriculture (CIAT), which coordinates PABRA, also helped develop drought-resistant beans which were provided to South Sudanese refugees in order to reduce their reliance on food aid and increase self-sufficiency.

From Sustainable Farms to Table

In addition to designing nutritional legumes that are heat-tolerant and disease-resistant, Mukankusi also highlighted the need to address the entire value chain to ensure there is productivity at the farm level.

This means promoting sustainable crop management practices such as intercropping, which involves growing two or more crops alongside each other, and crop rotation which can help increase soil fertility.

Anthony pointed to the importance of education in demand-led approaches and the business of plant breeding as the Syngenta Foundation in partnership with the Australian Centre for International Agriculture and the Crawford Fund work closely with African Centre for Crop Improvement in Ghana, South Africa, Kenya and Uganda so that local scientists can take the lead.

“Now we have a community of breeders who are trying to do this to really make an impact,” she said.

In light of environmental challenges, the world has already started to see a shift in consumption patterns as plant-based foods gain popularity. Crop breeding may therefore be more essential than ever.

“If we are going to sustain the supply, we cannot sit back but we have to keep pace with the changes. The breeding has to be there and responsive to current and future demands,” Chirwa said.