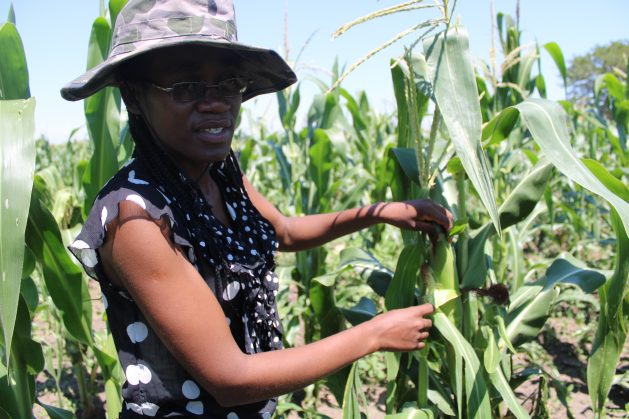 BULAWAYO, Zimbabwe, Jun 25 2019 (IPS) - A Jamaican start-up has an innovative solution to help smallholder farmers—many of whom do not have the collateral demanded by financial institutions to access loans—build a track record of their production that is proving better than collateral.

FarmCredibly creates a record for farmers based on their production and they do not even need to leave the work on their farms to create this, founder Varun Baker tells IPS.

Blockchain is a decentralised, digital ledger initially developed for the cryptocurrency bitcoin. It works through a series of digitally connected records where information can be shared openly and publicly verified through a cluster of computers.

The decentralised nature of blockchain means that information is not stored in one place but on many computers or databases. The information is also time stamped. As such, if information is changed it has to be done through the system and cannot be deleted or changed at one point without the other databases of the information also being updated.

Using the block chain technology, farmers can plan their production based on the actual market demand. Distributors in turn safely source produce from many farmers with a reliable track record, says Baker.

Banking the under banked

In 2017, Baker and his team won a blockchain Hackathon competition organised by international IT company IBM and NCB, a major commercial bank in Jamaica for their idea of developing a tool which enables under banked farmers access loans and micro-investments.

In 2018, FarmCredibly entered the AgriHack competition organised by the Technical Centre for Agricultural and Rural Cooperation (CTA) and they emerged winners.

“Our strength is in technology and one big part that excites me about now and the future is the adoption of blockchain technology which can be a complicated subject for people,” Baker admits. “In our pitch, we simplified the value in using blockchain which is in enforcing the integrity in information. This still sounds really complicated, but the same idea is put more eloquently by a Jamaican songwriter who said ‘you so can fool some people some time but you cannot fool all the people all the time,’ and this is the value we want to bring to agriculture.”

Working with farmers 10 years ago, Baker had encouraged them to use mobile applications for good record keeping and documenting their work on their farms. But in many cases farmers were reluctant to use any online or mobile device in the field.

Today Baker sees the potential of using blockchain technology to release farmers from the burden of using apps themselves.

The technology is designed in a way that farmers can build a profile on themselves based on the data that other people have so they do not have to change anything about what they are doing, Baker explains.

Through FarmCredibly, Baker forms partnerships with companies that farmers already do business with. Input suppliers, buyers, agro-processors, hotels and supermarkets have valuable information on farmers that helps support their production record.

“We use this information to build up a profile on behalf of the farmer, which means once a farmer is ready to get a loan at the bank, it is an easier process for them because suddenly they have a track record. This is something that can work for even unbanked people who have no credit history at all,” Baker says as he takes on the challenge of convincing lenders that this is valid information that reduces risk when it comes to providing loans in agriculture.

“In my experience lenders find agriculture a risky business and we are trying to convince people that we are lowering risk in this area which provides massive economic value across the world,” says Baker who is currently using funding from the CTA and Development Bank of Jamaica to run a pilot project in Jamaica to facilitate loans for farmers to be more productive.

For many years, smallholder farmer, Kevin Buchanan from Clarendon Parish, south of Jamaica, battled to obtain loans because he did not have the collateral demanded by banks. Thanks to a digital profiling of his production he recently received a 385-dollar micro loan through FarmCredibly to buy nursery supplies to start growing his own seedlings.

“I believe in the use of technology as it helps greatly in doing the same thing better and more efficiently,” Buchanan tells IPS. “That way with the same amount of resources more can be done. This is very good also as it increases my income and makes success more sure.”

Buchanan grows hot and sweet peppers, corn and sweet potatoes on part of his 10 hectare farm. With funding, he would be able to transition his produce and mostly grow hot peppers, which have a guaranteed market.

“My limiting factor is access to funding,” Buchanan laments. “I am not alone…this is the dilemma of so many farmers. Before the blockchain intervention I could only put a quarter of a hectare of sweet potatoes in production…now I have 1.11 hectare. Because of this too I am working on the capacity to supply other farmers with seedlings. The income from this will be used back in the farming operation to assist me with buying irrigation supplies to establish a block of hot peppers.”

While financial inclusion is on the rise thanks to mobile phones and the internet, nearly two billion people globally remain unbanked while two-thirds of them own a mobile phone that could help them access financial services. This is according to a World Bank 2018 report on the use of financial services. It also finds that men remain more likely than women to have a bank account.

Digital technology can take advantage of existing cash transactions to bring people into the financial system, the report finds. For example, paying government wages, pensions, and social benefits directly into accounts could bring formal financial services to up to 100 million more adults globally, including 95 million in developing economies. Currently, 86 percent of Jamaica’s population is under banked, meaning they do not have access to loans.

A technology for agriculture development

Researchers at the Institute of Agrifood Research and Technology (IRTA) in Spain argue that blockchain promises ubiquitous financial transactions among distributed untrusted parties, without the need of intermediaries such as banks.

In particular, blockchain is suitable for the developing world, where it can support small farmers by providing them with finance and insurance and facilitate transactions. Although small farmers supply 80 percent of food in developing countries, they rarely have access to insurance, banking or basic financial services.

In a 2018 report published by the CTA, researchers Andreas Kamilaris, Francesc Xavier Prenafeta-Boldú and Agusti Fonts say ongoing projects and initiatives now illustrate the impact blockchain technology on agriculture. The researchers suggest blockchain has great potential for the future. For example, in December 2016 AgriDigital, an Australian company founded a year previously, successfully executed the world’s first sale of 23.46 tons of grain on a blockchain. Since then, over 1,300 users have been involved in the sale of more than 1.6 million tons of grain over the cloud-based system, involving 360 million dollars in grower payments.

While blockchain technology offers many opportunities for farmers, there are various barriers and challenges for its wider adoption, researchers worry.

There is lack of expertise by smallholder farmers to invest in the blockchain by themselves, researcher say. Besides, there is a lack of awareness about the blockchain and training platforms are non-existent and there are regulation barriers too.