UNITED NATIONS, Aug 7 2019 (IPS) - It has been 74 years since a nuclear devastation took place. But a clear message stands — that nuclear weapons must go and peace and love must reign.

“Because if we forget the horrific consequences of the use of these devices, the likelihood of repetition is increased.” Jonathan Granoff, President of the Global Security Institute told IPS, as the United Nations marked the tragedies of Hiroshima and Nagasaki. 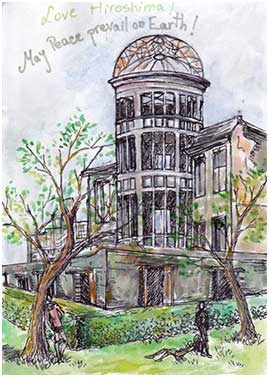 was the only structure left standing

in the area and was added to

As a historical witness that

conveys the tragedy of suffering

the first atomic bomb in human

history and as a symbol that vows

to faithfully seek the abolition of

The event took place August 5 at the Japan Society, and featured several performances, an interfaith prayer, and guest speakers.

Japan surrendered, marking the conclusion of World War II. However, Japan was left to face with dead bodies, illness induced by radiation, and over 70% of buildings extinguished.

Today, both cities are prospering, with Hiroshima’s population exceeding 1.1 million, and radiation levels have officially been deemed low and safe. However, the scars of the attacks linger on in the form of survivors, known as hibakusha.

“I was only 13 then, so I talked back to my mom and slammed the door and I left, and I never saw her again,” Tomiko Morimoto West, survivor of the bombings, recalled at Monday’s event.

Yet, West retained a vehement sense of gratitude citing that “Every day I wake up, I am very grateful.” She then stressed the importance of making sure loved ones know they are loved.

“When you leave home, please hug your family”, West said, concluding that “sometimes that’s the last time you may see the family”.

Against the backdrop of the anniversary, the United States last week abandoned the Intermediate-Range Nuclear Forces Treaty (INF).

“We have never had a nuclear war. Arms control treaties have helped enormously in building trust and taking the arsenals down by over 75%. It is irresponsible to undermine the legal tools, the diplomatic tools, in favor of increased threats,” Granoff said.

That said, “the existing United States policy seems to contemplate the actual uses in war, Granoff noted during his keynote speech, going on to read an official statement by the Joint Chief of Staff of the U.S. Military.

“The scale of Hiroshima & Nagasaki is primitive. If even one current nuclear weapon was used, the damage that one atomic bomb would do is more than 1,000 times powerful than Hiroshima & Nagasaki. It will happen in a future. Mistakes are human character, so it will happen,” Reverend Doctor T. Kenjitsu Nakagaki, President and Founder of the New York HEIWA Peace and Reconciliation Foundation told IPS, when asked if something like Hiroshima and Nagasaki could occur, if nuclear weapons are not abandoned. 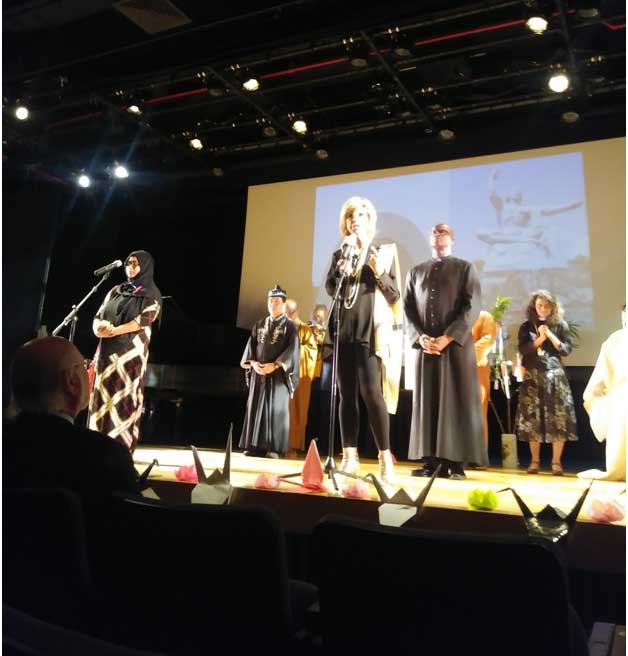 Nuclear bans also have the support of the UN Secretary-General António Guterres.

It is up to the young generation as well to help ensure the termination of nuclear weapons as well.

“We have a continuing duty to communicate to future generations and the world the inhumanity of nuclear weapons.” Tomihisa Taue, Mayor of Nagasaki urged in a letter, assuring that the government of Japan will steadily press forward with efforts to have the youths of today pass on the stories and experiences handed down to them, concluding that the tragedies of Hiroshima and Nagasaki must never be repeated, and that instead, “we must gravitate towards a more peaceful world”.

When asked what message he had for the future generation, Granoff said: “If we get every issue other than controlling and eliminating nuclear weapons right, it simply will not matter.”

“Young people should demand right knowledge. Critical learning is essential, always see pro and con. Maybe they can write articles and publish it. For me, it is important to realize the precious value of all the lives equally. Some value should be able to change people’s life.” Nakagaki said. He noted that young people should be made aware of the current conditions of nuclear weapons, and thus share what they think on social media.