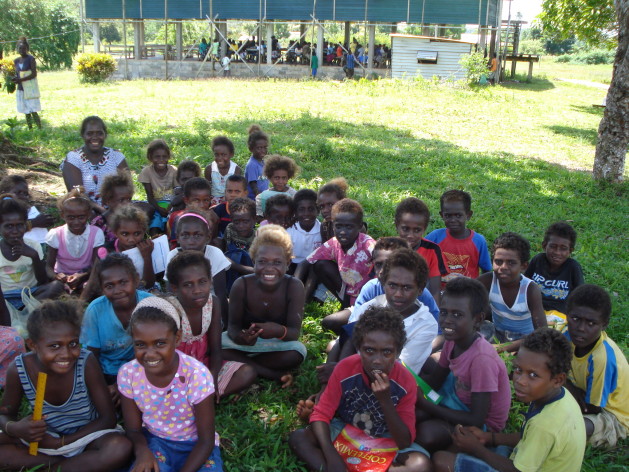 In the Solomon Islands, approximately 40 percent of the population of 550,000 could have active Trachoma. Credit: Catherine Wilson/IPS.

This intervention is unprecedented because it could begin to reverse the neglect and inequities that the 17 main NTDs bring. Many NTDs are debilitating and reduce the quality of life of and dehumanize the infected, yet most are preventable and treatable.

NTDs disproportionately affect 1.6 billion poor people worldwide. Most of the burden is in Africa, Asia and Latin America. Africa accounts for more than 50% of the global burden of NTDs. South East Asia has the second highest burden of NTDs – the region accounts for 74% of reported cases of leprosy globally.

A reason for this geographic clustering of NTDs is that they thrive in communities without access to clean water, basic sanitation and primary health care. Simply put, NTDs are diseases of inequity.

Neglected Tropical Diseases disproportionately affect 1.6 billion poor people worldwide. Most of the burden is in Africa, Asia and Latin America

Sadly, women and children bear the brunt of NTDs the most.  These diseases have negative impacts on school attendance, reproductive health and economic activities. Leprosy, intestinal worms and trachoma highlight the devastations caused by NTDs and show why it is imperative to address them to improve people’s economic wellbeing and human dignity.

Intestinal worms such as hookworm, roundworm, whipworm, and schistosomiasis infect more than 25% of the world’s population. The demographic mostly infected by these worms are school-age children.

Hookworms are passed in stool. In many developing countries, there is still widespread public stooling – 546 million Indians (equivalent to 74% of population of Europe) have no access to toilets and therefore stool in public. In Nigeria, for instance, 23.5% of the population stool in public.

It is not hard to imagine that in communities with open defecation, playgrounds become breeding grounds for all sorts of infections. Hookworms which are passed in stool lurk around, penetrate the skin and infect children. Therefore, a favorite pastime of children becomes a dangerous gateway to lifetime of misery, discomfort and lost productivity. Mass drugs administration delivered once a year clears intestinal worms.

Imagine having an infection that makes you lose all sensory feelings. You could run into a wall or step into fire unaware. These are some of the consequences of leprosy. More than 200,000 cases of leprosy were reported in 2017, according to WHO. Because the previous practice of isolating people affected by leprosy was to stow them away in leprosy settlements, people are unware that leprosy still deforms, isolates and stigmatizes many.

Leprosy is a disease linked to poor sanitation, but it could take years for deformities to begin to manifest. Perhaps the saddest part of leprosy is that it begins as hypopigmented spots on the skin that have lost sensation. Access to primary healthcare in poor and underserved communities where leprosy is prevalent means that such skin patches are properly diagnosed early as leprosy and patients placed on the right medications. Once these medications are started, the person affected with leprosy can no longer transmit the disease.

Trachoma, an infection of the eye is the leading cause of preventable blindness worldwide. Again, poor sanitation is implicated in the transmission of trachoma. Infection of trachoma spreads through personal contact. Flies that have been in contact with eye and nose discharges from infected people carry the infection.

Repeated infections over many years leads to eyelashes rubbing directly on the surface of the eyeball thereby leading to blindness. One hundred and fifty-eight million people reside in trachoma endemic areas and are at risk of blindness.

Prevention and control of trachoma involves surgery to treat the blinding stage; antibiotics through mass drugs administration to clear the infection; facial cleanliness to ensure the infection does not linger; and environmental improvement by giving access to clean water and sanitation.

While the proposed roadmap is commendable, governments across Africa, Asia and Latin America must show leadership in prioritizing universal access to health care and focusing on social determinants of health.

When primary health care is available in the remotest communities, health workers can provide basic health education and healthcare to the people. Universal Health coverage should be backed by increased risk communication to communities, to engender behavior change. For example, educating communities on the negative consequences of open defecation must be followed with provision of clean water.

To be sure, governments alone cannot provide the required solutions to reduce the burden of NTDs. Philanthropists, pharmaceutical companies, foundations, civil society organisations and social entrepreneurs must join this fight.

In 1987, the pharmaceutical company Merck made a commitment to donate as much Mectizan as needed to help eliminate river blindness – the  Mectizan Donation Program. Thirty years later, this commitment reaches more than 250 million at-risk people annually.

Likewise, the Audacious Fund plans to reach 100 million people in Africa, who are at risk of NTDs with deworming programs integrated with access to clean water, sanitation and hygiene strategies.

The WHO roadmap is an open call for inputs. All stakeholders must come on board and ensure that these preventable and treatable diseases that affect the poorest billion in the world are eliminated once and for all.