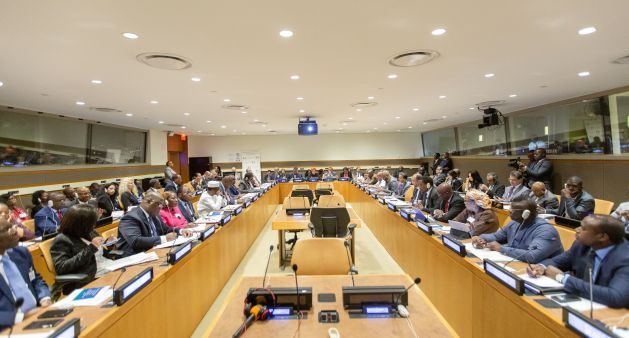 UNITED NATIONS, Sep 24 2019 - With an estimated 390 million people living in extreme poverty, hunger and food insecurity, Africa is in a race against time to deliver on its regional and global development goals. On the sidelines of the UN General Assembly on Sunday, African heads of states and governments met to emphasize urgent collective action and the need for greater collaboration between the United Nations and the African Development Bank to fast-track Africa’s development.

The meeting, convened by the African Development and the United Nations, is “the first of its kind” between the two institutions taking place at the UN Headquarters, UN Deputy Secretary General Amina Mohammed said.

“We are entering into the decade of action to deliver the SDG’s…The investment requirements are vast,” Mohammed said. “The role of the African Development  Bank is crucial…to help de-risk investments and attract investment flows……..Africa’s premier institution needs much more support” she added.

The leaders called for additional resources to drive the urgent task of Africa’s development.

Speaking at the meeting, the President of the African Development Bank said, “The clock is ticking, the seconds are passing very fast, yet we still have time left on the clock. We can still close the gap. I am fully convinced that with a change of pace, driven by a greater sense of urgency, and global collective responsibility, Africa can still achieve the SDGs”.

The two-hour meeting, moderated by the African Development Bank, was attended by seven African presidents – from Chad, Democratic Republic of Congo, Ghana, Guinea, Ethiopia and Lesotho, in addition to  representatives of some 30 governments.

The leaders spoke of what had worked in their countries – including mainstreaming development goals into national plans, scaling up initiatives, and the implications of harmonizing policies and strategic entry points for the implementation of development goals at national, regional and global levels.

Ambitious development initiatives undertaken by the Bank with regional collaboration are already showing success, such as Desert to Power, which aims to provide access to electricity for 250 million people across the 11 countries of the Sahel, 90 million of them through off-grid systems.

Stemming the tide of illicit financial flows, public debt and tax evasion would be urgent measures to be taken by leaders if they meant to stay on track, she said.

Areas for potential collaboration include climate change in Africa, gender mainstreaming, promoting private sector investment, measures to utilize risk insurance to mitigate impact of natural disasters in Africa and appropriate security arrangements to support the Bank’s operations in fragile states in on the continent.

The African Continental Free Trade Area, which came into force this year and creates the world’s largest free trade zone, will be another major area for collaboration under the partnership.

An assessment by the United Nations Development Program has clearly shown that achieving the Bank’s High 5s will allow Africa to achieve about 90% of the SDGs.  “So, the faster we deliver on the High 5s, the faster we will reach our goal and desired destination,” Adesina said.