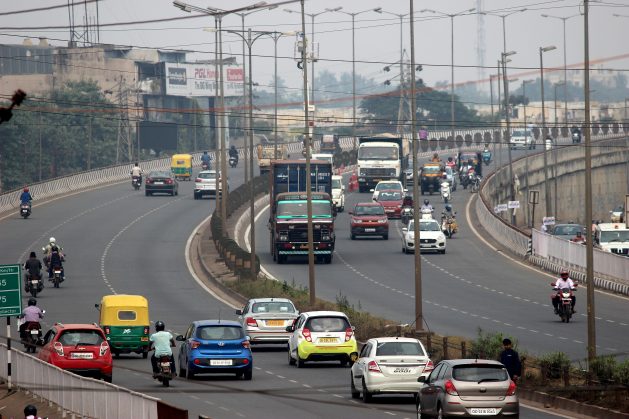 By 2030, India would have 600 million vehicles on their roads, three times the current numbers leading to massive air pollution and greenhouse gas emissions unless it transitions rapidly to green vehicles. Credit: Manipadma Jena/IPS

NEW DELHI, Dec 6 2019 (IPS) - Dogged by intractable air pollution debilitating large northern swathes from mainly urban vehicle emissions, India earlier this year announced targets for a 40 percent non-fossil component in its fuel-mix by 2030 as part of its Nationally Determined Commitments (NDC) to the Paris accord on climate change. It aims for full electrification of public transit systems and of one-third private vehicles by 2030.

While the Indian government’s intent is firm and EVs multi-dimensional benefits for India widely acknowledged, its ambitious transition to clean transportation is proving far from smooth.

By 2030, India would have 600 million on-road vehicles three times the current numbers, dominated by two-wheelers, fuelled mainly by 40 percent population in urban centres. Road transport accounts for around 11percent of total carbon emissions from fuel combustion.

India EV transition priority is on public transport buses, four and three-wheelers for commercial use and as front-runners that can create public awareness and inclination to adopt clean and cheaper-in-the-long-run electric vehicles.

EV sector that had seen its firstborn in 2010 and then sporadic new introductions without catching the buyers’ imagination or wallet, has been revived by this year’s national budget when the government heavily incentivised its demand by a slew of subsidies.

Hustled into activity by a government that means business this time and pressurised by the climate emergency, technical experts find there are serious infrastructural and policy gaps which need bridging before EVs can come on the roads to stay.

Where is the EV infrastructure?

The first of major hurdles is a near absence of battery charging infrastructure. India plans setting up at least one electric charging station every 3 square kilometres in earmarked metropolitan, one-milion-population and smart cities in the next three years till 2022.

The proposed 2,700 charging stations have been allocated $139,000, a good chunk of the total $1.4 billion budget, which also includes subsidies in the next 3 years under the government’s major EV scheme ‘Faster Adoption and Manufacturing of Electric vehicles (FAME)’.

“But India is seeing the chicken and egg problem of which should come ﬁrst – the charging facility or the EV,” said a study from Shakti Sustainable Energy Foundation, a Delhi-based clean energy policy non profit. “People will not buy an electric vehicle unless there are charging facilities. At the same time facilities do not make business sense unless there are vehicles to charge.”

Notwithstanding government incentives, upfront costs of an EV four-wheeler is between 2-3 times higher compared to the same-segment internal combustion engine (ICE) vehicle.

A basic EV hatchback model – the usual ICE entry level car for Indian families comes in the price range of an ICE mid-range sedan at rupees 10-12 lakhs ($13,900 – $16,700) that most middle-class Indians may never buy in their lifetime.

While the Indian buyer remains hesitant, there is an undeniable forward movement in the EV sector. Several Indian EVs have entered the market since last year. Already more international big names are readying to introduce their EVs into India – today potentially one of the world biggest markets globally, owing to its large population particularly in the 25 – 35 working age group.

Electric three-wheelers have begun plying Delhi and Bengaluru roads targeting micro-mobility or short distance needs such as 3 to 5 kilometre. An example are Delhi metro rail users commuting between the station and their homes. These 3-wheelers’ fares are low because the cost to them is much lower than diesel-run cabs and tuk-tuks.

“Though upfront cost of EVs are high they have a lower operating cost as against fossil fuel whose price have been going up. Also, EVs have only 25 to 30 moving parts as opposed to over 2000 moving parts in an ICE vehicle, thereby being more reliable, with fewer breakdowns,” argue World Resource Institute-India (WRI) researcher team of the Shakti study.

A single battery charge in EVs has limited a range of less than 200 kilometres. Accustomed to long distances on a full-tank, the fear of being stranded halfway can be stressful. To compound this drawback, single recharging can take as much as 5 to 8 hours. Though fast charging in an hour is possible with another charging technique, it needs refining in India’s high ambient temperature and power grid voltage limitations.

“Increasing distance range per charge would need bigger sized batteries and end up increasing the car load, compromising its performance. A battery itself is 50 percent of the car’s weight in current Indian EV models. The lithium-ion batteries now being used has low energy density, requiring material bulk,” explain Indian Institute of Technology (IIT) Madras researchers for the Shakti study.

The good news is battery technology is globally evolving fast.

“Car batteries will get much cheaper in 3 to 4 years as technology advances,” said Amitabh Kant, CEO of Niti Aayog, India’s policy think tank for achieving the country’s sustainable development goals.

“This will bring the electric car’s cost at par with the combustion engine car,” he assured. Today a battery alone costs nearly half the price of an electric vehicle.

Sector experts are not as optimistic telling IPS that battery cost cuts would take no less than 5 to 7 years, before making financial sense for traditionally price-conscious Indians to buy them.

India imports Lithium, Cobalt, Nickel, Manganese and Graphite, components needed for the car batteries. “Their prices will get pushed up as global manufacturing demands escalate in China, the U.S. and Europe,” they said.

However, the Indian Space Research Organisation (ISRO), which originally used Lithium-ion batteries for its aero-space operations, is already working on making these affordable for car use and transferring manufacturing technology to eligible car makers.

Indian start-ups too are developing a scalable technology for recovering up to 90 percent of these materials from used batteries. Bulk retrieval can be successful only if disposal regulations of cell phones, laptops and vehicle batteries are strictly implemented.

Unless renewable energy can be adequately utilised, fossil fuel only shifts the pollution from roads to coal plant regions.

Another big question being asked is, is India’s power grid ready for EVs to plug in?

With projections of EV increase, an impact assessment finds that high uptake of electricity during peak charging hours will cause a range of power network problems, including significant voltage drops or overload disruptions on distribution feeders.

The level of impact depends not only on EVs’ charging mode, but also on circuit-specific characteristics, researchers said. Location of especially the EV fast-charging stations should be carefully analysed before setting them up, they warned.