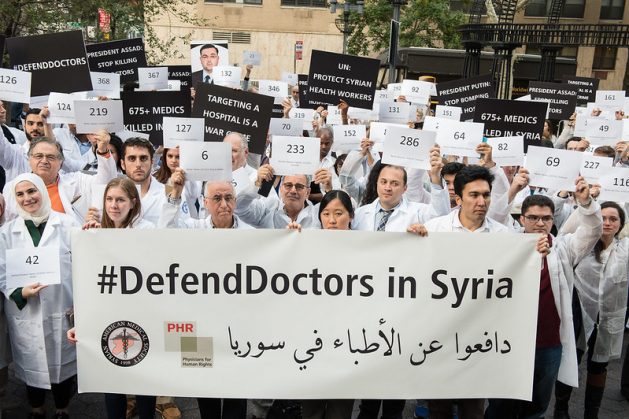 Syria’s government has arrested, detained and tortured large numbers of medics in a systematic effort to cut off treatment to swaths of the turbulent country’s population and swing the civil war in its favour, according to a new report. This photo dated 2015 shows supporters demanding an end to the bombing of hospitals in Syria at a die-in to defend Syrian health professionals. Credit: Michael Hnatov/Physicians for Human Rights

UNITED NATIONS, Dec 4 2019 (IPS) - Syria’s government has arrested, detained and tortured large numbers of medics in a systematic effort to cut off treatment to swaths of the turbulent country’s population and swing the civil war in its favour, according to a new report.

Physicians for Human Rights (PHR), a campaign group, provided jaw-dropping testimony from 21 physicians, pharmacists, volunteers and other medical workers who had been detained by forces loyal to President Bashar al-Assad.

Researchers found that Assad’s forces have tracked down and arrested medical staff, subjected them to beatings and humiliation and interrogated them over whether they had treated wounded rebel fighters and civilians in opposition areas.

“The Syrian government has effectively criminalised the provision of nondiscriminatory care to all, regardless of political affiliation,” the report says.

It has also “systematically targeted health facilities and health workers as part of a wider strategy of war aimed at breaking civilian populations and forcing them into submission.”

Between June and August this year, the New York-based research group interviewed 19 men and two women medical workers who had previously been detained by the Syrian government during the country’s chaotic, eight-year war.

Interviewees said they were detained for “real or perceived involvement” in treating injured “opposition members and sympathisers”. Interrogators tried to make the detained medics confess to treason, they said.

“In some cases, they were burned, shocked with electricity, and sexually assaulted.”

Researchers describe questioners and torturers accusing detained doctors of “working in or establishing field hospitals, providing medical treatment and material support to terrorists, and other acts considered to be subversive”.

The 48-page report, called “My Only Crime Was That I Was a Doctor”, highlights the case of a surgeon, known in the report as Dr. Youssef, who helped establish a network for treating injured protestors at the start of the Syrian uprising in early 2011.

Seven plainclothes security officers arrested Youssef at a hospital in the Qalamoun area, north of Damascus, in August of that year, and took him to al-Nabek State Security Branch, where he was strip-searched and caged in a tiny cell.

Youssef was tortured for some 1-3 hours daily, including electric shocks and beatings with concrete-filled pipes. Interrogators quizzed him about supporting “terrorists”, demanded that he name medical colleagues and forced him to sign confessions.

The physician was ultimately released in December 2011. For some months, he treated the injured in a field hospital in rebel-held Idlib province, in the country’s northwest, before crossing the border into Turkey in 2014.

Syria’s government, which is backed by Russian airpower and Iran-aligned militias, has repeatedly faced criticism for deliberately targeting doctors, clinics and ambulances as it claws back control over a fragmented country.

PHR has documented 583 attacks on Syrian health facilities since the conflict began. The group attributes 90 percent of these attacks on the government and its allies in what it calls a “purposeful assault on health”.

Last month, the New York Times daily reported on Russian air raids on Idlib over a 12-hour period, which found that the Russian air force repeatedly bombed hospitals in a bid to crush the last rebel-held stronghold.

Earlier this year, U.N. officials accused Russian forces of deliberately targeting hospitals and schools as a tactic to “terrorise” civilians — accusations denied by both Damascus and Moscow.

In August, the U.N. established a board of inquiry to investigate the bombing of U.N.-supported medical facilities in the northwest of the country, which is due to release its findings in the coming weeks.