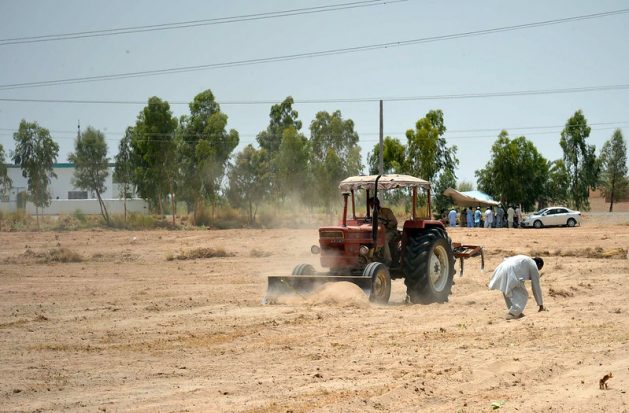 Inconsistent rainfall can be disastrous for winter and summer crops in Pakistan, where many farmers are still unaware of how to adapt to climate change. Credit: Ashfaq Yusufzai/IPS

KARACHI, Mar 13 2020 (IPS) - Unpredictable weather patterns in the form of excessive or prolonged rainfall are wreaking havoc for farmers across Pakistan as sowing and harvesting periods are severely affected.

After a short break in rainfall during the end of February, a forecast by the Met Department last week revealed that Punjab and Khyber Pakhtunkhwa (KP) provinces are expected to receive thunderstorms and rain, with some parts of Punjab expected to see hail. Southwestern Balochistan and Gilgit Baltistan (GB) in the north are also predicted to witness heavy rain. Even Sindh, the southern-most province of the country, which rarely sees rain is expected to experience a spell of thunderstorms in upper Sindh, with dusty winds in lower Sindh including Karachi. Official data reveals that in 2020, rainfall from January 1 to February 21 was already 33% higher than usual.

This erratic rainfall results in losses for farmers, who are among one of the most vulnerable communities and account for 48% of the workforce. Much of the crop is grown in winter, the rabi season, where sowing begins in mid-November and harvesting starts in April to May. One of the major crops grown during rabi is wheat, a staple diet in millions of homes, which is also exported if there is bumper crop. But changing rain and weather patterns, both in the summer and winter, have led this crop to be sown and harvested late, which often results in crop failure.

From blessing to curse

Pakistan is divided into 10 agro-ecological zones, each having its own climate and crops. Now due to climate change, each zone has a different impact.

Multan-based farmer Muhammad Aslam is among those who has been on tenterhooks as he tends to his wheat crop. While the winter rains have been a blessing for him and there is new grain coming in, prolonged rain can turn into a curse. This is because the wheat crop that he sowed in late November will soon be ready for harvesting, but the incoming rain and moisture will destroy his crop.

“In South Punjab, water is a huge issue,” says Aslam. “The weather patterns have changed so much that everything has moved up by one month. We used to sow wheat by October, but now with unprecedented rain patterns, our entire year’s crop cycle has been rearranged. Wheat has been sown late and at harvest time, instead of optimum temperature and drier air, we have been met with sudden spells of rain in the region.”

The moist air is a danger to the grain, especially since it causes a fungus in the wheat and sugarcane crops known as ‘rust’.

Aslam’s concerns are shared by thousands of farmers across Punjab, where the crop is of integral importance due the province’s vast agricultural land. It also contributes the most to the country’s agri-economy, as agro-based products account for 80% of total export earnings.

Only last year in April, widespread hailstorms, torrential rains, and harsh winds devastated up to 150,000 tons of mature wheat crop in Punjab. In sharp contrast, at about the same time in 2018 the weather was hot and dry — conditions which negatively affected yields and quality of wheat and also caused a delay in the sowing of cotton all over the country.

In some areas, erratic rains have pushed farmers to change to growing other crops which require shorter windows between sowing and harvesting. However, lack of awareness about climate change means that farmers have not shifted to alternative crops on a large scale.

Aamir Hayat Bhandara, a Pakpattan-based farmer in central Punjab said that traditionally, winter rains were scanty and occurred from December to March. “But now they start from January and don’t stop until April. Following this, we are supposed to have monsoon rains in June and July and so there is no long, dry spell.”

With these rains now occurring in March and April, farmers are referring to them as ‘pre-monsoon rains’.

“Almost every winter crop loses out because of this,” said Bhandara, who is also a founding member of the Farmers’ Bureau of Pakistan (FBP).

In October, the FBP urged the government to declare an agriculture and climate emergency in the country. “Untimely windstorms, erratic rains and sudden heat waves have impacted all our crops, not just in the winter season (rabi) but also the summer (kharif) season.”

Bhandara also pointed out that this change has forced farmers to switch to other crops such as maize, which is not traditionally a crop for South Punjab but is being farmed because of the poor performance of cotton.

Director General of the Met Department, Mohammed Aslam Chaudhry told thethirdpole.net that in his 31 years of service in the field, he has not seen weather conditions as erratic as in the last decade.

“Prior to 2015, the rain had somewhat of a set pattern and farmers would set their schedules according to the weather,” he said. “Now when it rains, no one knows when it will stop.”

Aslam said the patterns have changed so much that it worries farmers and others who live in rural surroundings. “[In areas] where there wasn’t much rain, now there is rain [such as in Balochistan and Sindh].”

Nabi Bakhsh Saithyo, the Secretary General of Sindh’s Chamber of Agriculture, said that given the changing weather patterns, Sindh should not depend primarily on wheat but instead focus on vegetables which do wonderfully in the delta areas in southern Sindh.

He said that even though climate change has caused Sindh to become dry, farmers are yet to realise this. “Unfortunately, there is no scientific survey or analysis about changing weather patterns,” he added.

“Since monsoon rains are late — and at times scarce — the sowing season is sometimes delayed until December instead of October or November. If it starts to rain hard after sowing, the land becomes overwatered. Late sowing also means lower production,” she said.

For farmers, a forecast is essential for decision making.

Unfortunately, Bhandara said that there are no early warning systems at the local level for long timeframes. There is also a lack of accurate information and hardly any radars to warn farmers.

The Punjab Meteorological Department has a unit called the National Agromet Centre which gives a special farmers’ forecast. Mostly through videos on Youtube, the centre hosts discussions on weather conditions and on tips for sowing. This information is shared in the regional language of each province.

“We have taken the forecast to the tehsil [administrative area] level,” said Bhandara, adding that they are trying to collaborate with television and radio channels. “We also have a farmers helpline 1315 which was launched for forecast enquiry.” Despite these efforts, Bhandara said these options are not always available for the local farmer, who is often illiterate.

Mohsin Abdali, an expert on agriculture from the University of Punjab, concurs, saying that the information does not reach most of the farmers, except maybe in some areas of central Punjab. Farmers cannot be expected to log on to Youtube to find out the weather forecast.

“They watch the mainstream news channels, but the government must come up with other ways of bringing awareness to them,” he said.

Early warning systems are desperately needed, because most farmers are still using traditional methods to find out ‘which way the wind is blowing’.

“The government should also provide crop insurance in case of crop failure, as well as storage facilities which are integral in saving the harvested crop,” Bhandara added. He described how harvested wheat stays out in the field in the open for a few days until it is put in jute bags, with a plastic sheet on top. “These methods are not safe and do not protect the wheat from moisture, especially if there is rain.”

Given that farmers are not involved in the policy-making process, Bhandara strongly feels that educating and assisting farmers as a priority are the only steps the government can take to limit the impact of climate change.

A weak or lackadaisical approach to this can cost farmers — and the economy — heavily.

This article was first published in thethirdpole.net. The original article can be read here.