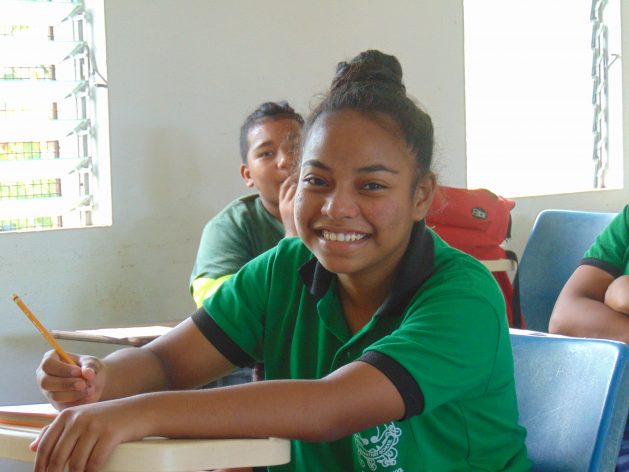 Teenager Karen Semens, from the Federated States of Micronesia, says her main challenge growing up is being a girl. She says that her culture doesn’t afford girls the same rights and opportunities of boys. Photo supplied.

SYDNEY, Australia, Mar 5 2020 (IPS) - For 13-year-old Karen Semens, growing up on Pohnpei — one of the four main island states in the Federated States of Micronesia, which comprises of more than 600 islands in the western Pacific Ocean — the main challenge is being a girl.

“In our culture, girls don’t have the same rights and opportunities nor do they get credit and recognition for their achievements as boys do. This prevents us from speaking our minds. For example in family meetings, only men make the decisions. I would like all girls to be treated as equals and have a say in decision making,” the 8th grade pupil from the Ohmine Public Elementary school in Pohnpei, tells IPS.

Equal rights for the girl child, climate change, access to healthcare and education are some of the issues Pacific island children are raising at the 84th extraordinary outreach session of the Committee on the 1989 United Nations (U.N.) Convention on the Rights of the Child (CRC) being held in Samoa’s capital, Apia, from Mar. 2 to 6.

Over 100 children from Pacific Island nations are having the opportunity to highlight the issues impacting them and their hopes for the future to the Committee on CRC. In a historic first, a U.N. human rights treaty body is meeting outside the U.N. headquarters of New York or Geneva, offering more governments, civil society organisations, regional agencies, and national human rights and academic institutions a chance to directly interact with the CRC and learn about its work. Having the session in Samoa is also providing the Committee with new insights and understanding of local and regional issues of the Pacific.

On the Mwokilloa atoll, where 13-year-old Austin Ladore’s mother grew up and where he spends his summer holidays, rising sea levels and coastal erosion are threatening the very existence of this low lying island and its people.

“We want action on climate change so our islands are protected and we, the children, can have a sustainable future,” Austin, Semens’s classmate, tells IPS.

“We are at the frontline, facing the consequences of climate change,” Ladore says. Austin Ladore (13), who is in 8th grade at the Ohmine Public Elementary school in Pohnpei, one of the four main island states in The Federated States of Micronesia, says children on his island are on the frontline of climate change. Photo supplied.

“There aren’t enough qualified doctors and our hospitals aren’t equipped to treat some of the chronic diseases. Many of us eat unhealthy instant noodles as fruits and vegetables are very expensive. Every day, it is getting hotter. It makes us dehydrated, but there is scarcity of drinking water. Most of the schools on the islands have outdated books. We want a solution to all these problems,” Semens tells IPS.

The Committee consists of 18 Independent experts that monitor implementation of the CRC, the most widely ratified human rights treaty in history, by its 196 States parties. During this session, the Committee will review the Federated States of Micronesia, the Cook Islands and Tuvalu on how their countries are protecting, promoting and can further improve the rights of children under the CRC. It will also prepare Lists of Issues on the Republic of Kiribati.

Acting chief justice Vui Clarence Nelson of Samoa, who is the vice-chair of the CRC and the only Pacific Islander to ever sit on any of the U.N. treaty bodies tells IPS: “The Pacific is a strategic choice by the Committee as it is a region with big potential for improved treaty body effectiveness where: reporting rates and civil society engagement levels are generally low; treaty body engagement and implementation is impeded by geographical and resource constraints – in Kiribati, the Federated States of Micronesia and the Cook Islands, it takes three days to travel by boat to the more remote outlying islands; and representation on the treaty bodies is extremely low, further reducing the likelihood of effective engagement and implementation.”

The Session is ‘extraordinary’ in nature because of being held in Samoa and is one week in length as opposed to three.

“By ‘bringing the treaty body system to the regions and rights holders in their backyard’ it is believed that the following impacts will be achieved: Increased ratification of human rights instruments; increased engagement of the States, national human rights institutions, and the civil society with the treaty body system in particular with the Committee on the Rights of the Child; and raising global awareness of regional issues – especially the effects of climate change in the Pacific. To this end a special part of the Session is being devoted to climate change and the right to a healthy environment,” Nelson tells IPS.

The principal intergovernmental organisation in the region, the Pacific Community (SPC) through its Regional Rights Resource Team (RRRT) has partnered with the U.N. to bring this extraordinary session to Samoa.

SPC RRRT director Miles Young tells IPS: “It is an excellent example of collaboration amongst many parties with a common interest in bringing the treaty body system closer to its stakeholders – in this case, the children, people and countries of the Pacific. This level of interaction with Pacific Islanders would not have occurred had the hearing been held in Geneva or New York.  The effect will be to make the treaty body system – and therefore human rights – more tangible to Pacific Islanders.”

While progress has been made in implementing the CRC, especially in enacting child protection laws, reducing child poverty, child marriages and mortality rates for children under five years of age, many challenges persist.

Besides climate change, children are suffering from economic inequalities, food and water insecurity, poverty, epidemics and outbreaks of diseases, domestic violence, sexual abuse and neglect, absence of child protection laws and mechanisms, high levels of corporal punishment in the family and domestic setting, outdated child rights legislation in some of the jurisdictions, and in some States an inadequate child justice system.

“The event has raised the profile of the CRC in the Pacific and we can build on this to generate greater momentum for human rights. We, in the Pacific, are almost always the ‘forgotten’ region when it comes to global affairs.  This is an opportunity to raise a key issue for the region – climate change in the context of Pacific children and the region more generally,” Young says.

In June 2019 the annual meeting of chairpersons of the treaty bodies stated its support for conducting dialogues with States Parties at a regional level. The U.N.’s Office of the High Commissioner for Human Rights (OHCHR) has organised the Samoa session with assistance and advocacy of SPC RRRT. The governments of the United Kingdom, New Zealand, Australia and Sweden are sponsoring the session and the Government of Samoa is hosting the event.

“RRRT will be assessing the pros and cons of the sitting – this analysis will feed into the U.N.’s review of the treaty body system, which the U.N. is currently undertaking, and help inform decisions on how and where it holds future treaty body hearings,” Young adds.

Speaking at the opening ceremony of the session on 2nd March, SPC’s deputy director general, Dr A Aumua said: “In the Pacific, there is a saying that ‘it takes a village to raise a child’. The meaningful participation of children is essential to the fulfilment of their rights, aspirations and full human potential. I’m confident that we can show the leadership needed to build a sustainable future for the children of this region.”