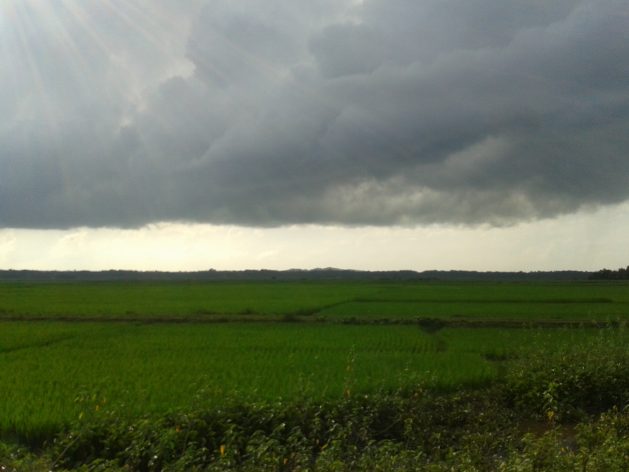 Jessore district in Bangladesh was one of the coastal districts evacuated of nearly 2.4 million people and over half a million livestock ahead of Cyclone Amphan making landfall. Credit: Stella Paul

HYDERBAD, India, May 21 2020 (IPS) - Amid the social distancing measures posed by the COVID-19 pandemic, coastal communities in Bangladesh and India face a double threat as the record-breaking Cyclone Amphan made landfall yesterday (May 20).

With sustained wind speeds of 270km/h, intensified by record water temperatures in May, the storm is now stronger than the 1999 super cyclone Fani and the joint-strongest on record in the North Indian Ocean.

At least 12 people have died in West Bengal, India and 10 deaths have been reported in Bangladesh so far.

Cyclone Amphan made its landfall on Wednesday afternoon at Digha – a coastal town 187 km south of Kolkata city. During the four-hour long landfall, it created a long trail of devastation, including uprooting trees, destroying mud houses and electricity wires.

Damages have also occurred in Odisha – another Indian coastal state where hundreds of mud houses have caved in due to the wind and heavy rainfall. Cities like the Odisha capital, Bhubaneshwar, are waterlogged with power outages all over Odisha and West Bengal, including Kolkata.

The devastation comes as India is still struggling to contain the coronavirus pandemic.

“We are fighting 3 challenges: 1) coronavirus , 2) arrival of lakhs (hundred thousands) of migrants and the cyclone Amphan,” Banerjee said at a May 20 press briefing.

According to Banerjee, the overall impact on the state has been disastrous. “It might take us 10-12 days to assess it all, but there are damages worth millions. Houses, roads, river embankment – everything has been hit,” she said, before adding her own office building – “Nabanna” has been partially damaged by the wind.

“We are shocked. We didn’t expect devastation of such a scale,” she said.

According to the meteorological office in Kolkata, the highest speed of Amphan in Kolkata has been 133 km/ph and though the wind speed has declined below 100 by Wednesday night, it subsided on Thursday afternoon after moving to Bangladesh.

In the middle of its intense fight against the coronavirus pandemic, Bangladesh launched a massive evacuation operation to safeguard its citizens and livestock in coastal districts.

By Wednesday evening, the country evacuated nearly 2.4 million people and over half a million livestock in the coastal districts of Khulna, Satkheera, Jessore, Rajbadi and Sirajganj – the districts that will be on the crossway of Amphan.

Local schools have been set up as temporary shelters/relief camps for the evacuees, local media quoted Bangladesh’s Disaster Management and Relief Minister Enamur Rahman as saying.

But with the number of COVID-19 cases on the rise with 27,000 already confirmed cases and over 350 dead, the cyclone has only increased the country’s uphill battle for safety.

“Cyclone Amphan, which is about to hit Bangladesh, will worsen the situation of our population, which is struggling to control the COVID-19 pandemic and is already trapped due to measures of isolation and social distancing. While Bangladesh has an efficient system of cyclone shelters, most of the coastal communities that will be impacted are scared to move to those shelters, as it will be almost impossible to practice social distancing norms there,” Sohanur Rahman from YouthNet for Climate Justice in Bangladesh, told IPS before Cyclone Amphan made landfall.

Climate change is increasing the damage that cyclones like Amphan cause in several ways, including increasing sea surface temperatures and rising sea levels, increasing rainfalls during the storm, and causing storms to gain strength more quickly.

Stronger cyclones have become more common across the world due to climate change, and the strength of cyclones affecting countries bordering the North Indian Ocean has been increasing as the planet has warmed.

Also, sea levels in the North Indian Ocean have risen more quickly than other places in recent years. According to a study, India and Bangladesh could experience dramatic annual coastal flooding by 2050, affecting 36 million people in India and 42 million in Bangladesh.