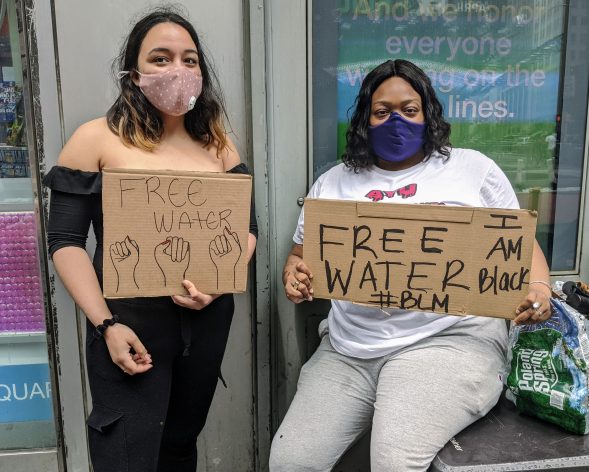 NEW YORK, Jun 4 2020 (IPS) - The United States has been a story of broken dreams and broken glass this past week.

Once again, an unarmed black man died at the hands of a white police officer, with George Floyd being pinned to the ground under a lawman’s knee in Minneapolis, Minnesota, as stunned passersby made cell-phone videos of the incident to post on social media.

Once again, local protests snowballed into nationwide rallies against police violence and racism that in some cases led to clashes, smashed windows, torched cars and looted stores — dashing hopes that America was making progress on race relations.

In New York City, Zekiya Louis, a 29-year-old beautician and entrepreneur, headed to Times Square to pass out free bottles of water at a Black Lives Matter protest aimed at prompting action from a Washington elite that has struggled with civil rights woes for decades.

“It’s becoming a problem now because nine out of ten times it’s black people who are the victims of police violence — and we’re tired of that,” Louis, who was born in the U.S. and has family in the Caribbean, told IPS.

“I know that a lot of people are protesting and they’re angry and they’re breaking stuff. But you gotta understand we tried protesting peacefully, we tried holding hands and coming together, and what we got was more violence and tear gas.”

The U.S. has been convulsed by waves of protests and mayhem since Floyd, 46, died on May 25 in the state of Minnesota after police officer Derek Chauvin, 44, pinned his neck under a knee for nearly nine minutes while Floyd was handcuffed face down in the street.

In videos, Chauvin appeared unphased as Floyd repeatedly gasped and said he could not breath, while onlookers urged officers to release the detainee, who had been accused by a deli worker of buying cigarettes with a counterfeit $20 bill.

Chauvin and three other officers involved in Floyd’s arrest were sacked soon after videos of the incident became a viral sensation and the latest example of police violence against an unarmed black man to send shockwaves across the U.S.

Chauvin has since been charged with second-degree murder and the other three former  officers — Tou Thao, Thomas Lane and J. Alexander Kueng — face counts of aiding and abetting murder.

The Floyd saga follows the high-profile cases of police killing unarmed black men, including  Michael Brown in Ferguson, Missouri, Eric Garner in New York, and others that also prompted waves of grief, demonstrations and soul-searching.

Within days, protests had spread from Minneapolis to dozens of cities across the U.S., including Los Angeles, Chicago, New York and Washington, some of which were accompanied with violence and looting. Police have made some 9,300 arrests.

Protestors have been met with tear gas, flash grenades and, at times, excessive force by the authorities. Police have targeted journalists, including the arrest of CNN reporter Omar Jimenez as he was broadcasting live. Officers have also been injured.

President Donald Trump expressed his “sorrow” at the “horrible thing” that ended Floyd’s life, but also courted controversy by threatening to use soldiers and warning via Twitter that “when the looting starts, the shooting starts”.

On Monday, Trump made headlines again, threatening to deploy the military on U.S. soil and posing for cameras while holding a bible in front of a damaged church shortly after police had used tear gas to disperse peaceful protesters from the scene.

On Wednesday, the United Nations High Commissioner for Human Rights, Michelle Bachelet, urged U.S. politicians to “condemn racism unequivocally” and “truly tackle inequalities” in a society in which whites are richer and healthier than blacks.

“The voices calling for an end to the killings of unarmed African Americans need to be heard,” Bachelet said in a statement.

While many protesters demanded accountability for the officers involved in Floyd’s death, they also raised broader concerns about heavy-handed policing, systemic inequality between black and white Americans and the painful legacy of slavery.

At a briefing with journalists, veteran rights campaigner Rev Al Sharpton said that the Floyd case must lead to new federal laws, the BBC reported.

“If we come out of all this and do not have federal legislation where we can protect citizens from local policing … then all of this is drama to no end. Drama in the street must be geared to fundamental legal change,” said Sharpton.

Back in Times Square, Manuela Ramirez, a 23 year-old Colombian student and waitress, who lives in Brooklyn, New York, called for big changes to how police officers perceive the citizens they are paid to protect and serve.

“It’s that mentality of these people who are just going to do bad things to us, and nobody should think like that.”