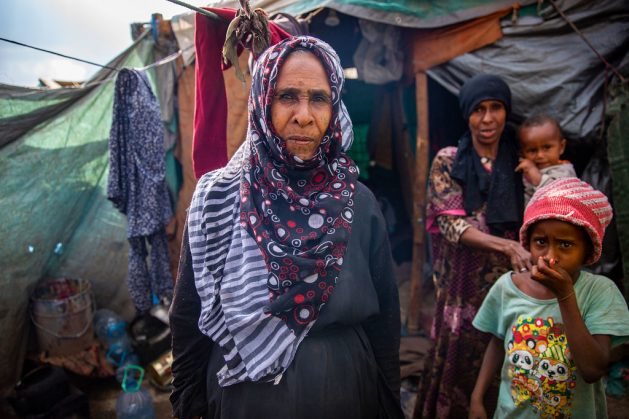 A displaced Yemeni woman stands outside a makeshift shelter that she shares with her extended family. Courtesy: IOM/O. Headon

UNITED NATIONS, Jun 3 2020 (IPS) - World leaders gathered on Tuesday to pledge $1.35 billion in aid for Yemen, which currently undergoing what many is the world’s “worst humanitarian crisis”, with Saudi Arabia announcing a contribution of $500 million.

At the ceremony, the president of the International Committee of the Red Cross (ICRC) Peter Maurer said that reducing aid to Yemen at this time would be “catastrophic.”

Those present at the ceremony repeatedly called for humanitarian access to be made accessible, without conditions, in the war-ravaged, famine-struck country where an estimated two million children are suffering from acute malnutrition.

The pledge, the first of its kind to be held virtually, was organised jointly by the government of Saudi Arabia and the United Nations. Representatives from 125 member states, among other NGOs and civil society members, participated.

Yemen has been embroiled in a five-year-long civil war, with Saudi-backed forces fighting the country’s Houthi rebels.

On Tuesday, Secretary-General António Guterres warned about the crises being exacerbated by the current coronavirus pandemic.

“The pandemic poses a terrifying threat to some of the most vulnerable people in the world, weakened by years of conflict, and with a health system that is already on the brink of collapse,” he said.

“Public health measures are particularly challenging in a country where trust in the authorities is weak, and fifty percent of the population do not have access to clean water to wash their hands,” he added.

He said in order for the current situation to be contained, it was the crucial that the war ended. This, Guterres said, would open up channels to respond to the country’s needs in the fields of health, humanitarian concerns and human development.

He reiterated his calls for a global ceasefire, which he appealed for in March as countries around the world began their lockdowns to contain the spread of the coronavirus.

His calls were further echoed by Maurer, president of the ICRC, who blasted the blocking of humanitarian aid to the Yemeni people.

“People’s needs are enormous, yet neutral humanitarian work is routinely blocked or politicised by conditioning it to intractable political progress,” Maurer said. “Blackmailing people into misery is not an option.”

He announced four call-to-action on behalf of ICRC:

“Conditioning aid to political progress is taking the people of Yemen hostage,” he added.

The United Kingdom, which pledged $197 million in aid for Yemen, also highlighted similar concerns. It demanded that all restrictions that currently stand as a barrier for Yemenis to receive aid should be “immediately and permanently removed.”

Guterres welcomed the aid. “Today’s pledges will help our United Nations humanitarian agencies and their partners on the ground to continue providing a lifeline to millions of Yemenis.”