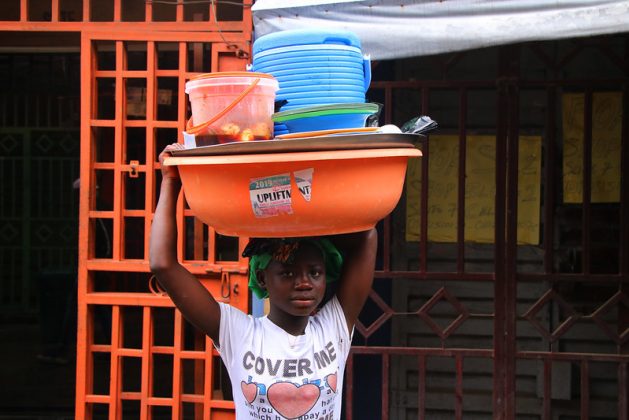 The International Labour Organization (ILO) says 99 percent of the 4.8 million victims of commercial sexual exploitation in 2016 were women and girls, with one in five being children. This young girl pictured here from Nigeria has never been to school and has marks from flogging over her hand. She lives with the person for whom she sells rice for and does not know her age. Nobel laureate Kailash Satyarthi said today that considering that most of the $ 8 trillion raised for the COVID-19 Response Fund went to bail out big companies, governments should seize the opportunity to hold them accountable and make sure that no child labour is involved in the supply chain. Credit: Tobore Ovuorie and Yemisi Onadipe/IPS

The two-day summit which started today and was facilitated by the Laureates for Leaders and Kailash Satyarthi Children’s Foundation – both of which were founded by Satyarthi – brought together several laureates and child rights leaders.

Satyarthi said considering that most of the $ 8 trillion raised for the COVID-19 Response Fund went to bail out big companies, governments should seize the opportunity to hold them accountable and make sure that no child labour is involved in the supply chain.

“That should be the responsibility of the governments who have put a lot of money in bailing out those companies,” said Satyarthi, adding that 20 percent of the COVID-19 funds should go to the marginalised. Earlier in the day, he said it was unacceptable that a mere 0.013 percent of COVID response money had been allocated to the most vulnerable.

Satyarthi further urged the youth to take the lead in championing the eradication of child labour in the world.

“I’m happy that in many places in the world through the 100 Million Campaign, young people are raising their voices and ready to fight the menace of child labour, illiteracy and poverty of children,” he said. 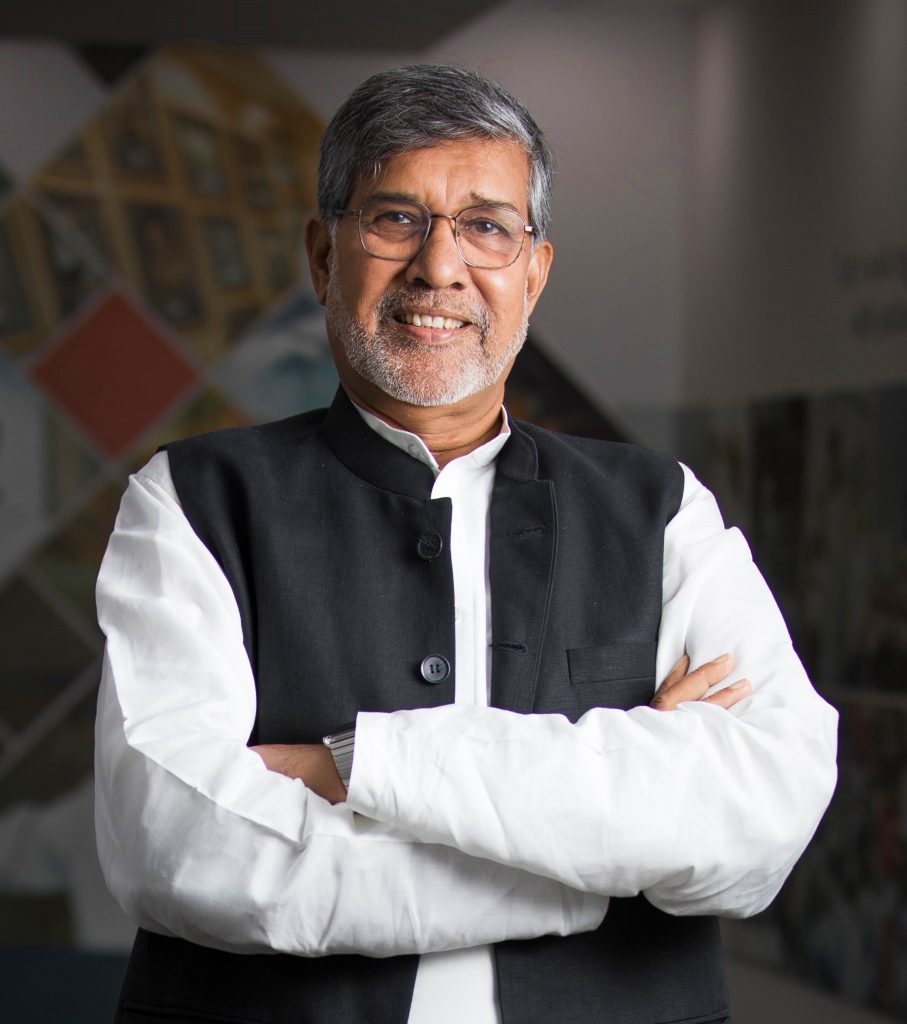 Kailash Satyarthi, the 2014 Nobel Peace Laureate, said that 20 percent of the COVID-19 funds should go to the marginalised. Earlier in the day, he said it was unacceptable that a mere 0.013 percent of COVID response money had been allocated to the most vulnerable. Courtesy: Laureates for Leaders

One such young person is Lalita, a youth parliamentarian and former child labourer from India, who demonstrated how she and her friends have been leading the way in convincing parents to withdraw their children from work. Through their door-to-door activism in her community, the youth was also spreading awareness about the importance of education.

“A lot has changed since then in the village,” the teenager told delegates through an interpreter.

She said authorities supported all out-of-school children and those withdrawn from work to return to school. As representatives of the youth in her village, she said they raised their concerns about child labour and discrimination against poor children to authorities.

“We fought against this, and we won,” she told delegates.

During the pandemic, Lalita and her peers wrote letters to Prime Minister Narendra Modi and the Education Minister Ramesh Pokhriyal seeking support to mount a big TV screen for underprivileged children who had no access to online learning. They also made and distributed masks to children and adults of her village while creating awareness about COVID-19 to protect them from the virus.

“I’m a 16-year-old from an underprivileged community, and I’ve been working relentlessly towards the protection of children towards the pandemic,” she told delegates, adding: “But despite being a part of the government and the private sector, you’re all not using your privilege and power to the advantage of marginalised children.”

Lalita, a youth parliamentarian and former child labourer from India, demonstrated how she and her friends have been leading the way in convincing parents to withdraw their children from work. Courtesy: Laureates for Leaders

Lalita was not only speaking on behalf of the children in her village, but she was raising her voice in support of the 152 million child labourers, of which 73 million are in the worst forms of child labour, across the world. In fact, with COVID-19, the International Labour Organisation (ILO) projects that the situation will worsen although child labour has been reduced by a third since the beginning of the century.

According to ILO director-general Guy Ryder, COVID-19 will, in all likelihood, lead to an increase in the numbers of child labour in the world

“It’s not difficult to understand why this is happening,” said Ryder. “We know that with the loss of jobs and livelihoods, extreme poverty is spreading around different parts of the world.”

He said with 2 billion workers in the informal economy and 1.6 billion of them facing a destruction of their livelihoods, inadequate social protection and closing of schools, more children could be driven into child labour.

“But this is not a situation that we should regard as a fatality; something that we can do nothing about,” he said, adding: “What we do now in rebuilding from COVID-19 will have a long-lasting effect on the future trajectory of child labour.”

This is a possibility because the private sector has also come to the party. Roberto Suarez Santos, the secretary-general of the International Organization of Employers, said, despite the devastating impact COVID-19 has had on the private sector, the people on the margins of society have suffered immensely.

While he said it is worrying that more children could be forced to labour as a result of the pandemic, he called on delegates to ensure that progress is not reversed.

“The ratification of the ILO Convention 182 is not a minor thing,” said Santos. “It’s a historic moment, but implementation is important despite the promise.”

He accepted that due diligence on supply chains should be strengthened, but he was quick to add that the focus should be on the entire economy because child labour also takes place in domestic contexts.

“The vast majority of child labour are not in the supply chain, which I want to insist are critical, but are also domestic. In North Africa, for instance, most of the child labour takes place in domestic contexts,” he said.

The Indian Minister of Women and Child Development Smriti Irani, spoke about how her government provided a safety net for children and their families during the pandemic.

Martin Chungong, the secretary-general of the Inter-Parliamentary Union (IPU), called on parliamentarians across the world to effectively play their role in ratifying international laws and robust budgetary functions.