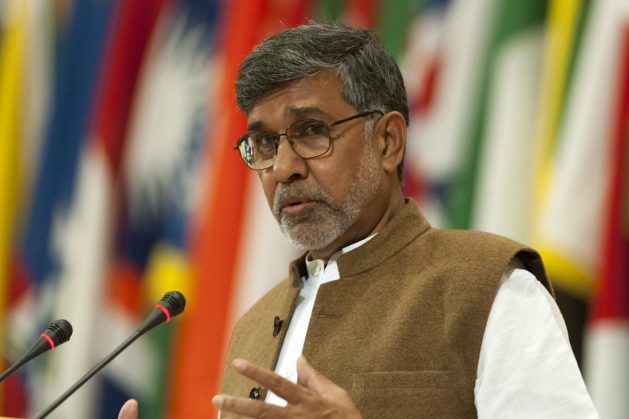 Kailash Satyarthi, founder of Laureates and Leaders for Children and 2014 Nobel Peace Laureate, says the COVID-19 pandemic has exposed and exacerbated the deep inequalities faced by the poorest families. Courtesy: Marcel Crozet / ILO

UNITED NATIONS, Sep 7 2020 (IPS) - The COVID-19 pandemic has upended the lives of millions of people worldwide, accounted for over 869,000 deaths, destabilised the global economy and triggered a marked rise in poverty and hunger in the developing world.

But the fallout from one of the most devastating consequences of the spreading virus is on the lives of a growing new generation: children.

Kailash Satyarthi, founder of Laureates and Leaders for Children and 2014 Nobel Peace Laureate, rightly points out that the pandemic has exposed and exacerbated the deep inequalities faced by the poorest families, who are the least equipped to protect themselves in times of global crisis.

“However, despite unprecedented government spending to protect national interests and the global economy,” he warns, “little has been allocated to protect the 1 in 5 children who live on $2 per day or less.”

Without urgent action now, he said, “we risk losing an entire generation”.

An upcoming summit – officially called the Nobel Peace Laureates and Leaders for Children at a Fair Share for Children Summit, scheduled to take place remotely on Sept. 9-10 – will focus on the plight of children, and more importantly, call for increased spending on marginalised families ravaged by the pandemic

Kailash says if the world gave the most marginalised children and their families their fair share, which translates to 20 percent of the COVID-19 response for the poorest 20 percent of humanity, the results would be transformative.

While some leaders have tried to capitalise it for their own political gain, there has also been an outpouring of support and solidarity for international cooperation to tackle it, he noted.

Though subjected to unfair and unfounded criticism by leaders like United States President Donald Trump, he argued, the World Health Organisation (WHO) and the U.N. system are playing a valuable coordinating role and providing much needed technical and material support, particularly for developing countries

“While the elderly and those with pre-existing health complications are the most susceptible to COVID-19, as always, women and children often become extra-vulnerable not only from the virus but also from their exposure to domestic abuse, gender-based violence and lack of effective social safety nets in most societies.”

“Millions of children being deprived of schooling and confined at home for a prolonged period threatens their future,” declared Gautam.

Mary Robinson, former President of Ireland and Chair of The Elders, points out the COVID-19 pandemic is leading to a global child rights crisis with increases in poverty and hunger, child labour and child marriage, child slavery, child trafficking and children on the move.

“We must ensure that the most marginalised children and communities have their fair share of the relief funds and services.  We must unite in this effort to protect the most vulnerable among us,” she warns. 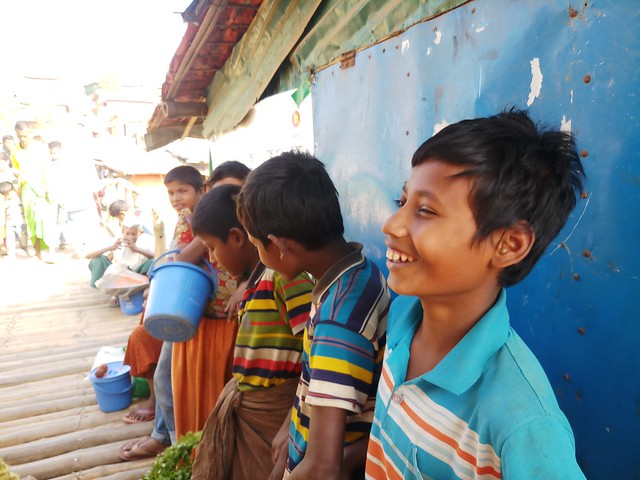 Mohammad Rafique, along with other refugee children, gathered at the Rohingya market of Kutupalong camp to sell vegetables he brought earlier from a local market in this photo dated Mar. 11, 2020. This was two weeks before Bangladesh went into a nationwide lockdown in an attempt to contain the spread of the coronavirus. the pandemic is leading to a global child rights crisis with increases in poverty and hunger, child labour and child marriage, child slavery, child trafficking and children on the move. Credit: Rafiqul Islam/IPS

Kerry Kennedy, President of Robert F. Kennedy Human Rights, says the pandemic’s public health emergency is set to exacerbate the abuse and exploitation of children, including those in detention.

Calling for government action, Prince Ali Bin Al Hussein of Jordan, said: “We need the governments of the world to come together to announce a rescue package for the most marginalised children and their families.”

The ongoing crisis could increase the number of children living in monetary poor households by up to 117 million by the end of the 2020, according to the latest analysis from UNICEF and Save the Children.

“Immediate loss of income often means families are less able to afford basics, including food and water, are less likely to access health care or education, and are more at risk of violence, exploitation and abuse”.

The children’s agency also pointed out that 188 countries have imposed countrywide school closures, affecting more than 1.6 billion children and youth. The potential losses that may accrue in learning for today’s young generation, and for the development of their human capital, are hard to fathom.

“More than two-thirds of countries have introduced a national distance learning platform, but among low-income countries the share is only 30 percent. Before this crisis, almost one third of the world’s young people were already digitally excluded”.

UNICEF also said the COVID-19 crisis could lead to the first rise in child labour after 20 years of progress. Child labour decreased by 94 million since 2000, but that gain is now at risk.

Gautam, who was Director of Planning and responsible for drafting the Plan of Action at the 1990 first-ever World Summit for Children, told IPS: “So far, the international response and focus of national action to combat COVID-19 has not given enough attention to the multi-dimensional plight of children, especially in poor countries and communities”.

He said there is also an imminent risk that “Vaccine nationalism” in the rich countries will lead to life-saving treatments being over-priced and hoarded by the rich leaving the world’s most vulnerable people, especially children, waiting in the cold.

In this context, the initiative by a group of Nobel Peace Laureates and Leaders for Children calling for a fair share of the resources mobilised for COVID-19 to be devoted to the wellbeing of children is most timely and welcome, he said.

“Children have only one chance to grow, and if they do not get the priority for protection from this devastating pandemic, they will be doomed for life. This simple truth is often forgotten or neglected by political leaders and decision-makers driven by short-term political calculations.”

Hence the importance of the voice of Nobel Peace Prize laureates with their moral authority and non-partisan credibility, he added.

A joint statement released here by Nobel Laureates and world leaders, said: “ We, the Laureates and Leaders for Children, call upon the world’s Heads of Government to demonstrate wise leadership and to urgently care for the impoverished and the marginalised. Decisions made by our leaders, actions taken by us and the discourses that ensue in the next few weeks will be crucial.”

“They are going to shape the future of polity, economy, culture and morality. Development priorities will be recalibrated, individual freedom, privacy and human rights will be redefined. We must take this opportunity to transform traditional diplomacy and politics into compassionate politics. COVID-19 has exposed and exacerbated pre-existing inequalities in our world.”

While this virus does not differentiate between nationalities, religions or cultures, said the statement, it is most adversely impacting those who are already marginalised – the poor, women and girls, daily wage earners, migrant labourers, indigenous peoples, victims of trafficking and slavery, child labourers, people on the move (refugees, internally displaced and others), the homeless, differently abled people, among others.

The virus, restrictions placed on the majority of the world’s population, and the aftermath will have a devastating impact on the most vulnerable amongst us

The result of this US boycott of a joint effort by 170 countries coordinated by WHO, Global Alliance for Vaccine and Immunisation (GAVI) and the Coalition for Epidemic Preparedness Innovations (CEPI) is that it could potentially lead to hoarding of the vaccine and higher prices for doses, he said.

“The ultimate victims of such “vaccine nationalism” are likely to be children in poor countries – who might be the last on the line to get the vaccine, contrary to the call for vulnerable “Children First” priority that organizations like UNICEF, Save the Children and others have been promoting for decades.”

“I hope that the  Nobel Peace Laureates and Leaders for Children at a Fair Share for Children Summit will raise their voice against the risk of any such “vaccine nationalism,” Gautam declared.