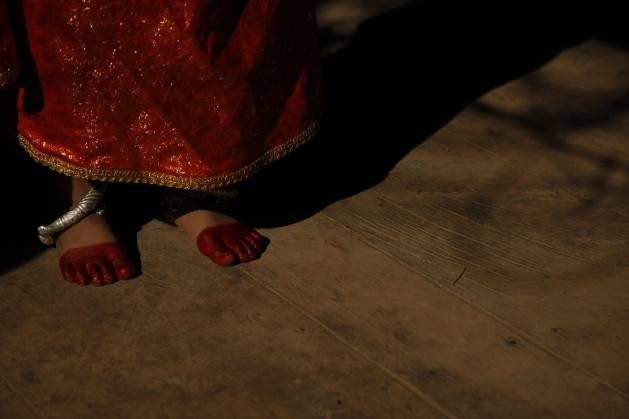 KATHMANDU, Oct 29 2020 (IPS) - Mohan and Sarita (name changed) studied together in the same school from Grade 6 onwards. They were friends initially, but fell in love and wished to be together, though underage.

Sarita’s parents did not approve of this relationship. They restricted her from going to school, and having any interaction with Mohan. Both then decided to quit school and elope, even though they knew marriage before age 20 was illegal.

Nepal’s policies assure that girls have opportunity for education, employment and exercise their rights. But increasing instances of elopement prove that most parents have failed.  But we need to bridge the gap between the law and the social norms

They crossed the border into India, to get married. But the parents of Sarita filed a police complaint against Mohan charging him with human trafficking, and rape of a minor.

After a year, Sarita and Mohan returned to the village with a baby. Mohan was detained and taken to court. By this time, Sarita’s own parents had forgiven her and accepted her child. They were also sympathetic towards Mohan.

Sarita’s father approached the police to withdraw his case, but it was not legally possible. Today, Mohan is serving out his sentence. His father-in-law regrets having filed a police case against him. He takes lunch for Mohan every day in jail.

This is not an isolated case. As per the Nepali law the age of consent is 18 years. Girls, in such instances, have been mostly sent back to their parent’s home and the boy, if under 18, is sent to a correction home.

As per the National Civil Code Act 2017, the legal age of marriage has been raised to 20 for both boys and girls so that young people can finish school, become independent and mature before they can make informed marriage choices.

However, there is a wide gap between the purpose of the law and practice, and social norms. This gap needs to be addressed for the law to be effectively implemented. In 2014, at the Global Girl Summit held in London the Minister of Women, Children and Senior Citizens made a pledge to end child marriage by 2030, a commitment reflected in the National Ending Child Marriage Strategy.

Marriage is viewed as a traditional and religious institution and is considered a ‘must’ for girls in Nepali society. Parents and members of the family are expected to be responsible for the marriages of their daughters and sisters.

The reasoning is ‘protection of girls’, ensuring a ‘secured future’ and a ‘better life’.  Girls are also seen as an economic burden on families, and the pressure of dowry has made this worse. Girls from a very young age are also socialised in such a manner that they see marriage as the only possible future. 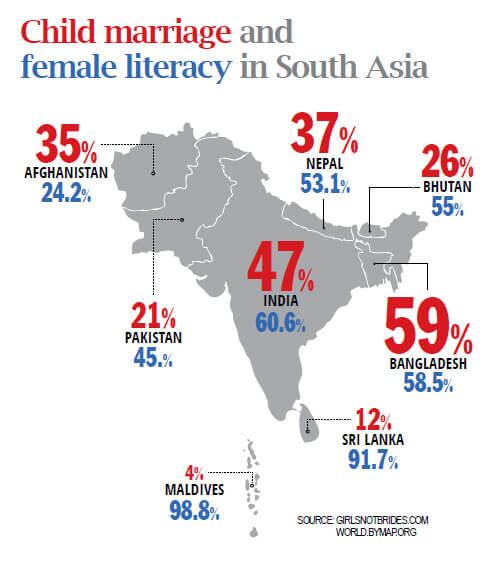 Many girls feel a sense of security when married, and also perceive marriage as the beginning of their lives. Even among school girls one rarely finds a girl brave enough to declare that she may consider marriage only after school, or may not wish to marry at all.

The thinking of parents, family members and even the young girls are shaped by strong patriarchal mind-sets that view girls as objects to be married off to a ‘permanent home’. The result of all this. Our girls are not safe, and parents play a part in keeping it that way.

In reality, the expectations that the girls and their families have of marriage are not always met. With weak agency, low self-esteem, and less confidence, girls are unable to negotiate equal status in marriage.

The unequal power relationship between men and women always place young married girls as subordinates – they are expected to solve their married life challenges by themselves.

Parents mostly shrug their shoulders if married daughters land in trouble from in-laws. Girls are often left alone to fight their fight. Despite being aware of their rights, lack of economic independence, confidence to speak up for themselves and poor knowledge of sexual and reproductive health among the girls result in unwanted pregnancies, gender-based violence and, sometimes even rape.

Nepal has the third highest rate of child marriage in the region, after Bangladesh and India. The Nepal Demographic Health Survey (NDHS) 2016 showed that on average women marry four years earlier than men (17.9 years versus 21.7 years). And the Multiple Indicator Cluster Survey 2019 revealed that nearly 14% of women 20-24 years had given birth before age 18.

But change is happening. As per the Demographic Health Survey of 2016, the proportion of young women age 15-19 who have never been married has increased from 56% percent to 73%, indicating a positive trend toward later marriage. However, the challenges for educated, economically independent girls and young women are equally tough and slightly different from those of the uneducated.

They have to deal with multitasking at home and work equally well, manage the expectations of joint family members, and if not met, deal with separation and divorce. Expectation of marriage, disapproval of living a self-governing, economically independent life without marriage is also not accepted with respect and appreciation by the society.

Local political leaders have been trying to reduce the legal age of marriage down to 16. Their argument is that marriage at the age of 20 years is too late, and to ‘keep’ the girl at home unmarried until then is not advisable.

The extreme social control of girl’s sexuality encourages early marriage and unsafe relationships. On one hand, the control of female sexuality is somehow supported by legal restriction of age for sexual relationship between girls and boys.

On the other hand, rapidly changing external context offers both boys and girls more opportunities for interaction through education platforms, or social media. In urban areas, it is increasingly common to see young girls and boys in friendship and sometimes also in relationships. Sooner or later, this trend will gradually expand to the rural areas also, posing serious challenge in implementing the law.

We urgently need a debate about the challenges of implementing the law and existing social norms around marriage and sexual activity between young people. We need to shift our thinking, mind-sets and beliefs to provide space and opportunity for girls to grow and make their own life choices.

Children should be exposed to untraditional gender norms, so they do not automatically adopt those of their parents’ generation. Girls and boys should learn about sexuality and reproductive rights in a way that empowers them to make safe and consensual choices.

Girls should be allowed dreams that go beyond marriage, and it should not be promoted as an ultimate destination for girls. The institutional features of marriage are accountable for 23% of married women experiencing domestic violence. We cannot make such high rates of failure the end destination for our girls.

Awareness alone will not be enough to break entrenched feudal and patriarchal mind-sets of both of men and women. Better education alone will not change these harmful practices. Sexuality of adolescent girls and boys needs to be better understood and accepted. Parents should support, not hinder, that journey.

Nepal’s policies assure that girls have opportunity for education, employment and exercise their rights. But increasing instances of elopement prove that most parents have failed.  But we need to bridge the gap between the law and the social norms.

Karuna Onta, PhD, is the Social Development Advisor at the British Embassy in  Kathmandu.