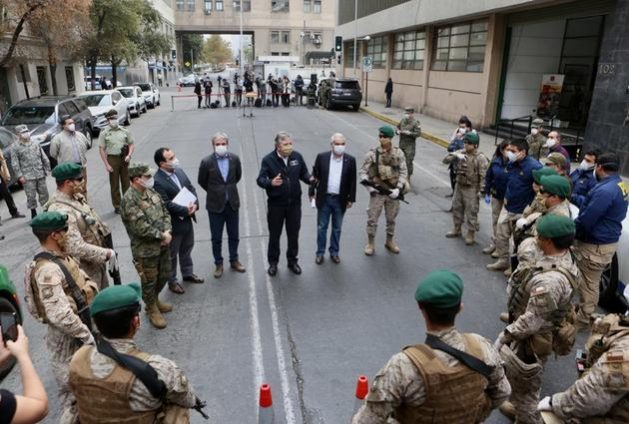 Civil-military operational meeting in the middle of the street in Chile, as part of the actions to contain the covid-19 pandemic. Credit: Ministry of Defense of Chile

NEW YORK, Nov 17 2020 (IPS) - During the Covid-19 pandemic, armed forces in Latin America have been taking on essential tasks: manufacturing protective equipment, delivering food and treating civilians in hospitals. In at least a dozen countries, soldiers have been deployed to enforce containment measures, often using brute force, on populations made up of largely poor informal workers.

In Venezuela and Bolivia, the armed forces have also been used to repress political opposition and to shore up governments with questionable democratic legitimacy.

Observers of the situation in Latin America fear that permanent militarisation will become the new normal, and that, in the absence of adequate civilian institutions, many governments will use their armed forces to provide basic services and to clamp down on their critics at the same time. Democracy in Latin America, they warn, may be reduced to no more than a façade once the pandemic is over.

“It will take Latin America a long time to recover from the pandemic. People will feel more insecure and will probably have less confidence in governments. In a great many countries, we will see a strengthening of ‘tutelary democracy’,” says Adam Isacson director of the Defense Oversight programme at the Washington Office on Latin America (WOLA), a research and advocacy organisation advancing human rights in the Americas.

In ‘tutelary democracies’, according to the Polish-American theorist Adam Przeworski, civilian authorities run governments in which the military has the final say.

In the context of Latin America, these pseudo-democracies could take hold as a form of government. Isacson is particularly concerned about Honduras and Guatemala, where the presidents recently dismantled international anti-corruption commissions with the backing of the army, and El Salvador, where the president attempted to intimidate parliamentarians by calling the military into the Legislative Assembly earlier this year.

The region, beset with high rates of violence andpoor justice and accountability systems, is forecast to see a 9.1 per cent fall in GDP this year, according to the Economic Commission for Latin America and the Caribbean (ECLAC).

The deployment of armies in response to natural disasters and health emergencies is standard practice, across the globe. No civilian institution is able to mobilise on such a scale. Analysts, however, agree that the worry in the Latin American context is that, in the absence of competent civilian institutions, the military will continue to play a central role once the current emergency is over.

Since the beginning of the pandemic, military units have been stationed in urban areas of Argentina, Bolivia, Brazil, Chile, Colombia, Ecuador, El Salvador, Honduras, Mexico, Peru and Venezuela to carry out patrols, man checkpoints, temporarily close borders and, in some cases, to detain citizens for violating health regulations. During the first few weeks of lockdown, armed forces arrested over 18,000 people in Peru and hundreds in El Salvador.

Although this backdrop may bring to mind the Latin American military dictatorships of the 1960s, 1970s and 1980s, the prominence of the armed forces today does not necessarily presage new military coups, according to Kristina Mani, director of Latin American studies at Oberlin College in Ohio and author of the 2011 book Democratization and Military Transformation in Argentina and Chile: Rethinking Rivalry. She is, however, in no doubt that the military’s growing role in civilian tasks cuts into the space usually controlled by democratically elected governments.

“The armed forces will undertake the tasks they are called on to do by civilian authorities, which is likely to mean that they will require more resources and have a greater ability to question civilian leaders,” says Mani. “The military will have more influence in the countries where it is being deployed most widely.”

The security forces in Venezuela have arbitrarily detained and prosecuted journalists, health workers, human rights defenders and political opponents since mid-March 2020 as part of a state of “emergency and alarm” declared in response to the pandemic, Human Rights Watch reports.

In Bolivia, the restrictions have been used as a pretext for suppressing political demonstrations against the interim government of Jeanine Áñez, who illegally assumed the presidency in November 2019 and postponed the presidential elections on two occasions. In spite of the political repression, Luis Arce, the socialist candidate running for the party of the ousted president, Evo Morales, won the elections on 18 October.

During Áñez’s government, “the military in Bolivia played a dual role by forcing people to stay at home and silencing them as a result. It was also used to clamp down on protests and demonstrations,” says Mani. “This dual role, which politicians can use to their advantage, is a serious cause for concern.”

In the ruins of neoliberalism

Many Latin American countries began their current democratic journey in the 1980s and 1990s, at a time when they were forced to implement so-called structural adjustments– severe cuts in government spending – imposed by the World Bank and the International Monetary Fund. Poverty levels in the region remained largely unchanged, while income inequality rose sharply.

Urban violence linked to organised crime and drug trafficking escalated and the region became one of the most violent in the world. Corruption scandals involving political leaders have been the rule rather than the exception: more than half the countries in the subcontinent are embroiled in a single case, that of the Brazilian industrial conglomerate Odebrecht.

According to Brett Kyle, assistant professor of political science and faculty member in the Office of Latino/Latin American Studies (OLLAS) at the University of Nebraska and author of the soon to be published book Military Courts, Civil-Military Relations, and the Legal Battle for Democracy: The Politics of Military Justice, civilian institutions in Latin America have a long history of failure, especially in relation to public security and the workings of the justice system. Rather than investing resources into institutional structures for security and justice, Kyle explains, Latin American governments have used their militaries to deliver “quick fixes”.

This militarisation was already visible prior to the pandemic.

The last 20 months offer numerous examples: Guatemala’s president, Jimmy Morales, surrounded himself with military personnel on announcing his decision to shut down the UN-sponsored International Commission against Impunity (CICIG); Mexico formed a National Guard largely made up of military personnel; Brazil’s president, Jair Bolsonaro, encouraged celebrations of the 1964 military coup; Honduras created a new police force that quashed the protests in December 2019; El Salvador’s president, Nayib Bukele, brought the army into the National Assembly to intimidate parliamentarians; and the presidents of Ecuador, Peru and Chile, accompanied by uniformed generals, announced crackdowns on demonstrations.

Mexico, a country that has never endured a military dictatorship, is a singular case. The party that governed the country for 71 years kept the armed forces out of civilian matters. Since 2006, however, the military has been undertaking public security tasks under the pretext of contributing to the fight against organised crime. President Andrés Manuel López Obrador has conferred even wider responsibilities on the military.

Despite his government having cut current public spending by 75 per cent this year, the military is building the next major airport and a tourist train. It has also been placed in charge of customs operations. The Mexican military is taking on an increasing number of tasks, despite being the national institution most widely denounced for its role in extrajudicial killings and forced disappearances.

According to a Latinobarómetro opinion poll, satisfaction with democracy fell from 44 per cent in 2008 to 24 per cent in 2018. There is not a country in the region where the majority of citizens are satisfied with this form of government, and in Brazil the level of satisfaction was as low as nine per cent. Confidence in the military is also falling, though the level is still high compared to other institutions: 44 per cent in 2018. And the pandemic appears to have exacerbated the lack of trust in civilian governments.

“We shouldn’t see these trends as a reason for the military to suddenly try to take over civilian governments in the region,” argues Kyle. “What we may see, however, are scenarios in which military leaders view civilian governments as incompetent and try to assume a more prominent role in decision-making.”

Although the United States has directly or indirectly intervened at least 41 times to change governments in Latin America, often supporting military coups, experts agree that the role of the US in this increased militarisation is minimal.

If anything, the impact of President Donald Trump’s government on this wave of militarisation in Latin America has been by omission: its disinterest in supporting democratic initiatives made it easier, for instance, for Guatemala and Honduras to shut down their anti-corruption commissions.

Alongside the growing militarisation in the region, Latin America is seeing the emergence of vigorous social movements . In 2019, millions of citizens in Bolivia, Chile, Colombia, Ecuador, Guatemala, Honduras, Nicaragua, Peru and Venezuela took to the streets to denounce corrupt leaders, to call for an end to austerity measures and to fight for free and truly democratic elections.

“The waves of protest we saw in 2019 are going to return and will be bigger still, especially among populations that will find themselves unemployed or underemployed in the midst of a deep economic recession,” says Isacson, warning that mass demonstrations in an increasingly militarised region are “a recipe for social unrest and conflict”.