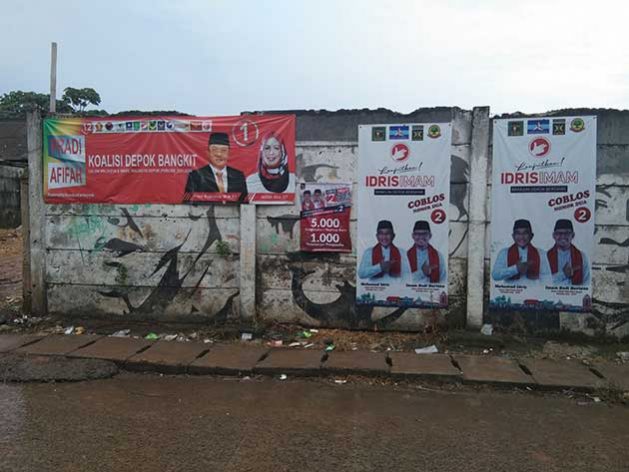 Posters of rival tickets for mayor of Depok, a commuter city 40 minutes by train south of Jakarta where many of its 2.4 million residents work.Credit: Warief D. Basorie

JAKARTA, Dec 8 2020 (IPS) - In just over a day, on 9 December, Indonesia holds 270 simultaneous local elections for executive office. This involves nine of the republic’s 34 governors, 224 of 416 bupati (district chiefs) and 37 of 98 mayors. The polling was initially scheduled for 23 September but the independent KPU (General Elections Commission) put the date back to 9 December due to the Covid-19 pandemic.

In this batch of local polling, 105 million Indonesians aged 17 and above in this nation of 268 million people are eligible to vote.

Like the national election for president, local office elections are rigorously contested since the end of the 32-year authoritarian rule of President Soeharto in 1998.

During his prolonged regime, Soeharto appointed the country’s governors, mayors and district chiefs to maintain unopposed power through office loyalty. Many active military officers got such appointments in line with the-then dwifungsi (dual function) concept of the armed forces. Uniformed personnel concurrently had a military and a social-political role.

In post-Soeharto Indonesia, with the passing of a democratic election bill, the president no longer makes such arbitrary appointments. Moreover, the dual-function practice has ceased. Now, the run for legislative and executive public office is highly competitive.

What has aroused attention in this election-cycle is not so much how the coronavirus scourge affects the electoral process but more on who are in the running. The move of President Joko “Jokowi” Widodo’s first son to enter the political arena has drawn public attention and apprehension.

Gibran Rakabuming Raka, the elder of Jokowi’s two sons, is running for mayor in Surakarta, Jokowi’s hometown in Central Java and where he himself was a mayor.

At present there are 117 heads and deputy heads of local government in Indonesia tied into a dynasty-making relationship.

“What must be done is that its bad effects must be prevented where the space for competition becomes unequal,” she stated. 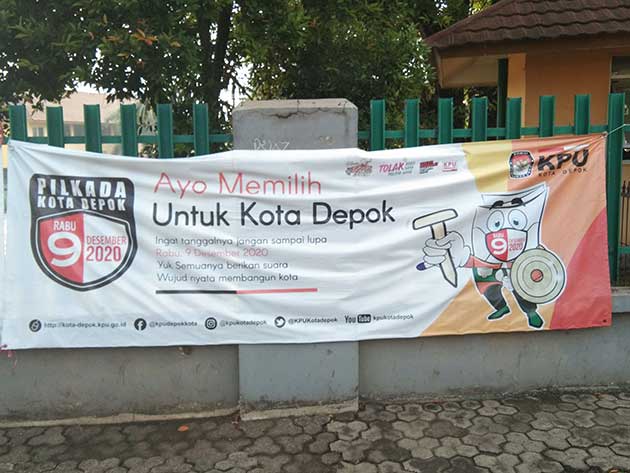 “It is not seldom when long-time party cadres must be bested by those who have a kinship with party elite. For sure, this is unhealthy for democracy. Internal party reform must be undertaken to allow for recruitment with integrity,” she asserted.

“The meritocracy principle with the aspects of worthiness and competence is an absolute condition to back a candidate of quality,” states political communication scholar M. Jamiluddin Ritonga at Esa Unggul University.

Party cadre development is important. Give at least 10 years before a party cadre becomes a candidate for an executive or legislative office, insists political communcation lecturer Emrus Sihombing at Pelita Harapan University.

Corruption is on watchdog radar screens.

Candidates may need as much as USD1.5 million to USD7.5 million for their individual campaigns, according to one estimate. Cash-short candidates may get help from political financiers. If the candidate wins, the financier demands pay-back in the form of business concessions.

Elected office-holders have been caught in political corruption. KPK (Corruption Eradication Commission) has detected and prosecuted 21 governors entangled in corruption from 2004 to July 2020. For the same period, 122 district chiefs, mayors, deputy district chiefs, and deputy mayors also got ensnared.

Single-ticket contests is also a searing issue. This is when a candidate faces no challenger. KPU identified 25 such tickets. The election law states a party or a coalition can field a candidate if they have at least 20% of the legislative seats won in the previous election.

Say, the candidate mayor garners the support of parties that jointly have more than 80% of the seats in the local legislature. Thus, any remaining parties together don’t have the minimum 20% seat-count to support a rival ticket. When this happens, that single ticket competes with a kotak kosong (blank box).

If the empty box wins the contest, the local KPU office would hold a new election that would have more than one ticket.

An empty box won the contest for mayor of Makassar in a 2018 local election. The KPU Makassar office is holding a second election this year with four tickets.

Single-ticket polling does not foster democracy as democracy thrives and throbs through competition.

Indonesia’s democracy is imperfect. The local election process is wanting. However, the significance of Indonesia’s local elections is that they are a proving ground for national leadership. Surakarta city mayor Jokowi succesfully ran to be Jakarta governor in 2012. Two years later, in 2014 Jokowi stood for president and won.

Competition would be tough with established national-level figures. One is Prabowo Subianto, Jokowi’s opponent in 2014 and 2019. Another is businessman and former Jakarta vice-governor Sandiaga Uno who was Prabowo’s running-mate in 2019. A third is DPR speaker Puan Maharani.

Puan is daughter of Megawati Sukarnoputri, general chair of the Indonesian Democratic Party in Struggle (PDI-P), the largest party in parliament. Megawati was the nation’s fifth president (2001-2004). Puan is also granddaughter of Indonesia’s founding father and first president, Sukarno. If Puan makes it, she would be a dynastic third-generation president in the making.