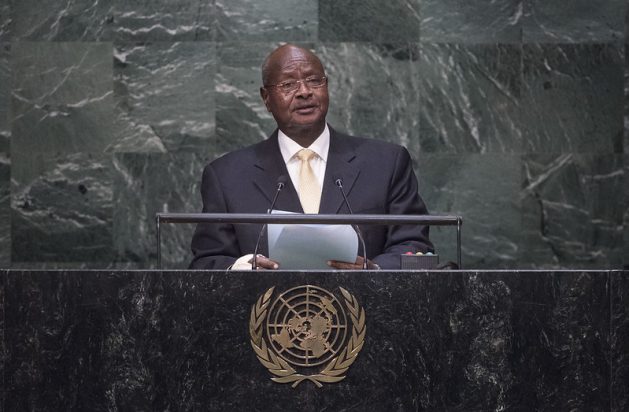 While the opposition leader Bobi Wine is under house arrest, analysts say Ugandan President Yoweri Museveni must make concessions to those who voted against him. Courtesy: UN Photo/Amanda Voisard

KAMPALA, Jan 18 2021 (IPS) - Thirty-five years ago when President Yoweri Museveni talked, a majority of citizens listened. But now, as he approaches almost four decades in power, his message is not resonating well — particularly with the country’s youth who constitute about 70 percent of the voting population in Uganda.

On Saturday the Electoral Commission of Uganda declared the incumbent president winner of the vote. While the opposition leader Robert Kyagulanyi, also known as Bobi Wine, remains under house arrest it is unclear how and when he will dispute the election results, as he’s vowed to do. But one thing is clear as analysts say Museveni must make concessions to those who voted against him.

In an election notable because of the nationwide internet shutdown that began on the evening before the elections, and is yet to be restored, Museveni secured 58% of the vote compared to 35% of the vote cast for opposition candidate, musician-turned-politician Bobi Wine.

Bob Wine has rejected the results as rigged. And has indicated that his party will challenge the result through all legal recourses available — this includes filling a case challenging the result within the next 14 days with the Electoral Commission of Uganda; going to court to challenge the results; as well as peaceful demonstrations, which are legal according to the country’s constitution.

Joseph Kalema, 38, resident of Kakindu Village near Kampala is convinced his candidate, Bobi Wine, won against Museveni in the Jan. 15 election but was simply “rigged out”.

“We are waiting for our generation president to tell us the next course of action,” Kalema told IPS, referring to Bobi Wine who is president of the opposition National Unity Platform (NUP).

Bobi Wine shut off from party officials and the world

However, it may take sometime before 38-year-old Bobi Wine can make that call as he has been under house arrest since the elections, with his residence surrounded by state forces, and his mobile phones reportedly disconnected.

The media have been denied access to his residence as well as his close colleagues.

In a tweet from Bobi Wine’s account but with ADMIN written in brackets— and presumably sent from outside Uganda’s borders as at the time of filing in the morning of Monday Jan. 18 the internet still remained shutdown — it was claimed that Member of Parliament Francis Zaake was beaten after he allegedly attempted to enter the residence. He is reportedly still in hospital.

Everyone including media and my party officials are restricted from accessing me. @ZaakeFrancis was arrested outside my gate as he made his way to my house, he was badly beaten by soldiers. He is now in Rubaga hospital.
(ADMIN)

In another tweet yesterday, again from Bobi Wine’s account but with ADMIN written in brackets, it was claimed that the opposition leader and his wife had run out of food and when his wife attempted to pick food from the garden she had been “blocked and assaulted by soldiers”.

It’s now four days since the military surrounded our home and placed my wife and I under house arrest. We have run out of food supplies and when my wife tried to pick food from the garden yesterday, she was blocked and assaulted by the soldiers staged in our compound. (ADMIN) pic.twitter.com/MLEtSbyCcW

Today, Jan. 18, elected members of the NUP called a press conference, demanding Bobi Wine’s immediate release, saying despite claims that the state forces surrounding him were there for his own protection, the current conditions under which their presidential candidate is living can be classified as house arrest.

Mathias Mpuuga the vice president of the NUP, and a newly-elected member of the party, said party officials had attempted to meet Bobi Wine were blocked by security. NUP demanded the immediate release of Bobi Wine, adding that he should be allowed to have access to his party leadership and lawyers to guide the next course of action.

When this will happen remains unclear. After being declared the winner in the election, Museveni said his main challenger Bobi Wine was an agent of foreign forces who wanted to push for their interests and were using him as their vessel to achieve their agenda.

Who the foreign forces are, was not clarified but Museveni alluded to “promoters of homosexuals” and a neighbouring country which was not named, and those intent on frustrating Uganda from reaping the benefits of its oil discovery

With the internet, a key mobilisation tool for the NUP, still shut down any large scale demonstrations would be difficult to organise.

Heightened security across the country

A few weeks ago when Bobi Wine, the main challenger to Museveni and the ruling National Resistance Movement (NRM), was arrested after being accused of flaunting COVID-19 guidelines during campaigning, there were spontaneous riots in urban centres across the country by his supporters.

The national security apparatus swung into action to quash the riots. Over 50 people died.

But Kalema, like many of his peers, simply do not care about the risk of being arrested or killed in confrontations with security.

“Many of our colleagues are languishing in jail, many have been killed, including innocent citizens. Should we just look on?” wondered Kalema.

Security is not taking matters lightly and are armed to the teeth to quail any violence.

“Last time they took us by surprise. Now we are more than ready for any riots,” Lieutenant Colonel Deo Akiiki, the deputy spokesperson of Uganda People’s Defence Forces, told IPS.

The army and the police had deployed heavily on the streets of Kampala and other major towns across the country ahead of the election. They are still patrolling the streets days after the election for fear of a repeat of riots, following the declaration of the election results that announced Museveni victorious.

Museveni is credited for ushering in peace and security to a country that had descended into anarchy following the overthrow of Idid Amin and subsequent short-lived governments.

The biggest challenge to Museveni is that the majority of voters in this election were not born when he took power. Many were born during Museveni’s reign and did not experience that difficult period in the country’s history.

What they understand are the issues of unemployment and poverty, which they have to deal with now, with many blaming this on Museveni’s continued stay in power.

Political analyst Dr Samuel Kazidwe says that situation is very fluid and a lot will depend on how the parties react.

“It is not over yet because President Museveni must find a way to reach out to Bobi Wine and his supporters and be able to make some concessions. Otherwise we could be headed for trouble,” Kazidwe told IPS.

Kazidwe said Museveni could learn from the Kenya experience and the Building Bridges Initiative (BBI), which was agreed between Kenyan President Uhuru Kenyatta and opposition leader Raila Odinga following a disputed 2017 election.

Kazidwe said that when looking at the election results, it was clear that the whole of the central region had rejected Museveni and his party as evidenced by the numbers of votes for the opposition.

Meanwhile, the  Secretary General of the ruling NRM, Justine Kasule Lumumba, said on Saturday that were looking for evidence of foreign interference in the country’s election.

Some see this as an attempt to justify the earlier shutdown of Facebook after it blocked NRM activists’ accounts over allegations of impersonating other users and unethical conduct.  However, the NRM has taken this as evidence of foreign interference in the election.

** The story notes that internet was not restored at time of publication of this piece. It was later restored around 14.30 Ugandan time.