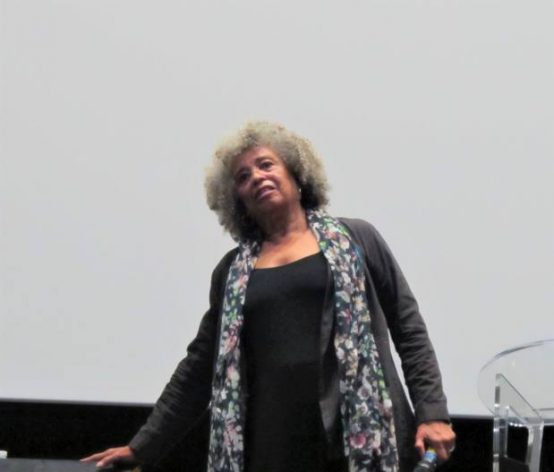 January 2021 also marks fifty years since she appeared before a court in California to declare her innocence after a legendary manhunt and arrest. With sympathisers around the world mobilising to demand her freedom, she was eventually acquitted of the charges of “aggravated kidnapping and first-degree murder” in 1972, following a 16-month incarceration.

Since then, Davis has been an emblem for social justice and has never stopped speaking out. In 2020, her long history of activism saw another chapter when she joined protests across the United States – in the wake of George Floyd’s killing and other acts of police brutality. Magazines such as Vanity Fair wrote articles about her, and she has been profiled in numerous other publications.

Last autumn in Paris, her face blazed from massive posters on newspaper kiosks around the city. The iconic image – huge afro, serious eyes, mouth open in speech – confronted pedestrians, motorists and bus passengers as they travelled through the streets of the French capital. 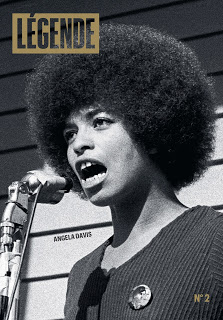 The cover of Légende.

The posters were announcing a special edition of a new, independent magazine that had devoted its second issue to Davis. Titled Légende, the quarterly magazine is the brainchild of Eric Fottorino, a former editor of the left-wing newspaper Le Monde. At a cost of 20 euros per copy, the publication is not cheap; yet many people bought the Davis issue. According to Fottorino, the magazine had several thousand subscribers by the end of the year.

The figures perhaps indicate the special place Davis holds in the French popular imagination, a place usually reserved for venerable rock stars. In 2018 for instance, when she spoke at a university in Nanterre, just outside Paris, her mere presence elicited deafening applause.

Légende contains contributions from writers such as Dany Laferrière, Gisèle Pineau and Alain Mabanckou, reflecting on what Davis has meant to them, and it recapitulates the events of more than 50 years ago – detailing Davis’ membership of the Black Panther Party in the 1960s, and her activism in the civil rights movement before and after the assassination of the Rev. Martin Luther King in April 1968.

It also recaps the incident in 1970 that pushed her to international attention: guns she had bought were used by high-school student Jonathan Jackson when he took over a courtroom to demand the freeing of black prisoners including his brother (George Jackson), and left the building with hostages, including the judge.

In a subsequent shootout with police, the perpetrator, two defendants he had freed and the judge were killed, and Davis was arrested and charged following a huge manhunt, although she had not been in the courtroom when the hostage-taking occurred.

These events are captured in bold photographs and illustrations throughout the 90 pages of the magazine. There’s the reproduction of the “wanted” poster, for instance, with the public being warned that Davis should be considered “possibly armed and dangerous”; there are pictures of Davis in handcuffs, and later being freed; of her with family and friends, including writer Toni Morrison; of her lecturing at universities and public events.

Légende ends with an image of Davis standing in the back of a convertible, wearing a mask against Covid-19, her right hand raised in a fist – while nearby, a protester holds a sign that reads “NO JUSTICE NO PEACE”.

To learn more about how the magazine issue evolved, SWAN interviewed editor Eric Fottorino. Below is a shortened version of the interview, which took place at Légende’s offices in Paris.

SWAN: Why did you choose Angela Davis for this issue?

Eric Fottorino: Because when we decided to do this second issue of Légende, there had been the death of George Floyd in the United States, and there’d been in France the demonstrations regarding Adama Traoré, and as we wanted to feature a woman, we choose Angela Davis – to remind people of her work and to show that the combat she fought in the Seventies, and later, for civil rights and feminism is still going on. We thought it was important to speak about Angela Davis’ past at the present time, whether that’s in the United States or France. Quite often we think that the present can only be explained by what’s happening now, but it is essential to know the history.

SWAN: She has spoken of how important international and French solidarity was for her when she was arrested and incarcerated. Can you explain why French supporters took up her cause?

E.F.: For the generation of the Seventies, she incarnated a struggle, a dream for justice, and also exactly the opposite – she embodied a female victim of injustice, but one who would fight with all her forces, energy and intelligence. And for France, that was important because she had studied philosophy at the Sorbonne, and so she received a great deal of support in intellectual circles, whether from Jean-Paul Sartre, Jean Genet, or Louis Aragon, and also from the Parti communiste français (PCF). She was the subject of a powerful poem by Jacques Prévert as well. So, she had intellectual and political support. There were marches, too, and we have a photo of one of these in which her sister (Fania) marched with Aragon in the streets of Paris, protesting for her freedom.

I think that all these elements made her a popular figure in France, and the famous cry “Free Angela” that could be heard in different countries around the world was taken up in France too. Besides, when she was liberated, she did a tour – to say thanks but also to make it clear that she wasn’t giving up the fight. She appeared on the big literary programs of the time, such as “Apostrophe”, and also in the studio of France Inter and the big public radio broadcasters. She was a huge presence, and then later a popular French singer, Pierre Perret, made a song about an individual who was the victim of racism, and one could see Angela Davis’ story in it, even if he didn’t specifically dedicate the song (Lily) to her.

SWAN: How about the political newspapers of the time? What role did they play?

E.F.: She had the support of the socialist newspapers like L’Humanité, but it must be remembered that the Parti communiste was among the strongest parties in the Seventies, with about 25 percent of the vote. It was even stronger than the Socialist Party. So, the support from people like Aragon (who was a member of the Parti communiste français) sent a huge symbolic signal.

James Baldwin, who supported her as well, was a writer who was very well known in France. He was not a popular author, but, in intellectual and literary circles, Baldwin was someone whose voice carried weight because he had lived for some time in Paris, and the fact that he wrote that Open Letter to his Sister Angela (An Open Letter to My Sister, Miss Angela Davis, 1971) stayed in people’s memory. (The translation by Samuel Légitimus is reproduced in the magazine.)

SWAN: Did you try to speak with Angela Davis for the issue?

E.F.: We tried but she was very busy, and I think she was also quite tired at the time we made the request. But this wasn’t a necessity for us in writing about her life and the past. Of course, if she had been available, we would have interviewed her, but we didn’t think it was indispensable. In a certain way, her actions, and her life, speak for her.

SWAN: Some Black French thinkers say that there is a sort of fascination and veneration in France for African Americans, including Angela Davis. How would you respond to that?

E.F.: In France, social justice fighters aren’t necessarily black, so there hasn’t been emblematic figures like in the United States with Angela Davis, Malcolm X or Martin Luther King and others.

It’s true that in political life in France, Black people have had a limited space, and sometimes people outside France say that there has not been a black minister or anyone prominent, but they don’t know about Christiane Taubira or Kofi Yamgnane. So, it’s not true that people like that haven’t existed. What is true is that there is no huge emblematic political leader like Angela Davis here.

(Ed: Fottorino has helmed another publication that examines the subject of being black in France, titled Être Noir en France.)