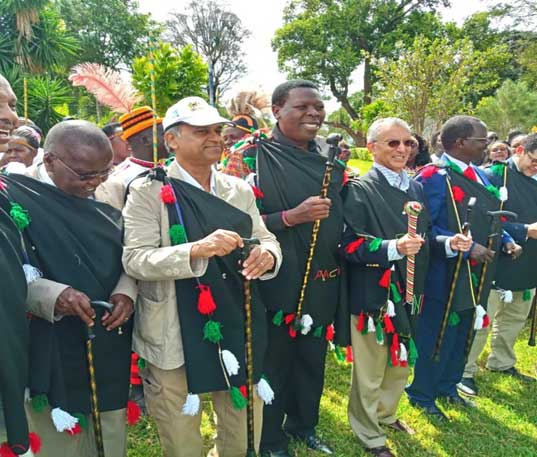 Several milestones in my personal and professional life have made Kenya a cherished place for me. I started my UNICEF career in Rumbek, South Sudan in June 2000, and my rest and recuperation breaks were in Nairobi. In fact Kenya was the first African country I had ever visited and, frankly, it was love at first sight.

I came back in November 2004 to serve with UNICEF Somalia based out of Nairobi, and in 2006 I got married in Kenya. My son who was 3 years old in 2014, has had his formative years growing up in Kenya, and considers himself Kenyan.

The following year I left to serve in Iraq, and I wondered if I would get an opportunity to return to Kenya. Seven years later, it happened: in April 2014 I came back as the United Nations Population Fund Representative (UNFPA) Representative and in August 2016, I was selected to lead the UN Country Team in Kenya as the UN Resident Coordinator and the UNDP Resident Representative.

Over the years, my bond with the country has been forged through jubilation and the shared suffering of tragedy. I have rejoiced at improvements in many health indicators in counties such as Mandera, Wajir, Garissa, Marsabit, Isiolo and Lamu where an unconscionable number of women used to die in childbirth, but where great progress has been made. I have also mourned in horror at the number of lives lost to terror attacks, the murder of 36 quarry workers by terrorists in Mandera county (I was in Mandera the same day), the slaughter of innocent students in Garissa University and the dastardly attack at Nairobi’s DusitD2 hotel.

This is not the end of my relationship with Kenya, but rather an opportunity to strengthen my ties with the country, and for sharing my knowledge and first hand insights about its great potential. It is also a chance to entrench South-South-Cooperation, a crucial part of the answer to Kenya’s, and more broadly Africa’s, unique opportunities to accelerate growth.

I realize that Kenya still faces formidable challenges, and the COVID-19 pandemic is likely to deepen this even more. Devolution has brought considerable resources and autonomy to counties, and yet lack of capacity, weak financial and regulatory oversight, will continue to hinder efforts to combat the asymmetry of wealth and human prosperity which will be a major obstacle to Kenya’s rise.

I am delighted with the country’s progress towards its Vision 2030 aspirations and the SDGs goals. School enrolment rates are up; more families are accessing maternal and child health services; social, economic and political opportunities for women have increased; major inroads have been made against child marriage and FGM, with President Kenyatta personally leading on this.

My experiences as the UN Resident Coordinator in Kenya have reiterated that by prioritizing investments in women and youth, Africa’s real potential can be unleashed, and I am proud of the support on this that we have been able to provide through the entire UN Kenya Country Team.

By 2030 agri-business will be US$ 1 trillion worth in Africa. Almost two-thirds of Kenya’s population is below the age of 30, and the future of food production rests in their hands. Kenya’s economy is anchored in agriculture, where 70% of the population earns its livelihood.

In most parts of the world, crop yields have grown ahead of population increases, helping to free them from hunger and famine, but not in Africa. We looked for creative and sustainable ways to harness Kenya’s strong internet penetration to exploit information technology that adds value and strengthens the economic appeal of agri-business for young people and creates digital jobs as well.

President Kenyatta has noted that “the current generation of young people has the potential of expanding Africa’s productive workforce, promoting entrepreneurship and becoming genuine instruments of change to reverse the devastation caused by climate change.”

Africa’s demographic boom has been hailed as its biggest promise for transforming the continent’s economic and social outcomes, but only if the right investments are made to prepare its youthful population for tomorrow’s world. Kenya launched the Generation Unlimited initiative spearheaded by the Head of State, and can serve as a blueprint to harness the demographic dividend that Africa’s youth represent.

Women’s empowerment was our other key pursuit, with special emphasis on access to sexual and reproductive health information and services. Without this, Kenya’s population is likely to continue its rapid increase, putting pressure on land and water resources, threatening livelihoods, food security, and straining already weak health systems. Gains made in women’s sexual reproductive health and rights took several steps backward in the midst of the COVID-19 pandemic. Reproductive rights must be a critical part of our arsenal to fight future pandemics.

It is in Kenya also that I witnessed creative ways of overcoming bureaucracy. Large organisations are often accused of responding too late or with too little in times of crisis, and my tenure saw many. Drought, floods and the worst locust invasion in 70 years, plus the Covid-19 pandemic, all upended much hard-earned progress. As a team however, we went beyond individual UN agency mandates in partnership with the Government of Kenya to quickly establish rapid responses to these emergencies, reducing the socio-economic impact, earning the confidence of the Government and overturning the common perception of the UN as an unwieldy bureaucracy.

The Government’s leadership was meritorious on all counts and that is why I have stated unequivocally why Kenya deserves an A+ for its response to the triple humanitarian crisis.

I am proud to have been part of many milestones in the partnership between both levels of the Government of Kenya and the UN, and to count on the unfailing support of the leadership of Kenya at all levels of Government. Kenya’s potential is boundless, and the country now offers stronger platforms for new shared-value investments than ever before.

I also express my sincere appreciation to the entire UN family in Kenya, the development partners, our donors and well-wishers and civil society partners and, most of all, the wonderful people of Kenya.

With a firm belief in a common destiny, I intend to keep telling the story of the emerging powerhouse that is Kenya.

My wife, son and I carry Kenya in our hearts.

Thank you for everything. Your generosity and friendship is nonpareil.