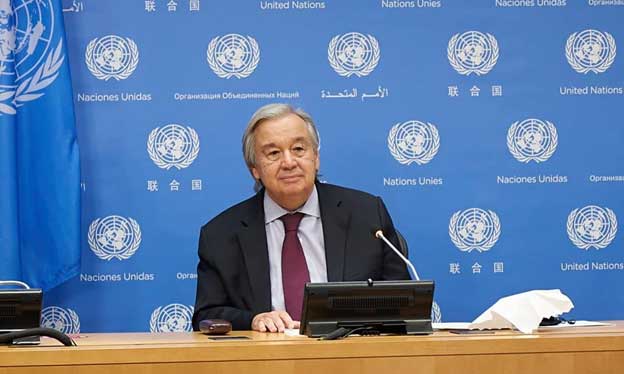 UNITED NATIONS, Jan 12 2021 (IPS) - The United Nations has been one of the most vociferous advocates of gender empowerment and a persistent critic of gender discrimination worldwide.

But still, it has continued to fall far short of its own lofty ideals.

The UN has never had a female secretary-general (SG) in its 75-year history while only four women have been elected– amid 71 men– as Presidents of the General Assembly, the organization’s highest policy making body.

On January 11, Secretary-General Antonio Guterres, a former Prime Minister of Portugal, announced he will be “available” for a second term– perhaps upending the longstanding campaign for a female UN chief.

But that final decision, however, will depend not only on the 193 member states, but also, most importantly, on the five veto-wielding permanent members of the UN Security Council (UNSC) who will have the last word on who should, or who shouldn’t, be the next secretary-general, come January 2022.

Historically, Boutros Boutros-Ghali of Egypt (1992-1996) was denied a second term by a single veto by the US even though he garnered the votes of the remaining 14 members of the Security Council.

In 1981, Kurt Waldheim of Austria was denied an unprecedented third term when he was vetoed 16 times, apparently by China, paving the way for the election of Javier Perez de Cuellar of Peru as Secretary-General. (1982-1991).

Guterres has taken a key role in enhancing gender empowerment in the UN system with scores of women appointed to high-ranking positions.

He told delegates last year “we achieved gender parity – 90 women and 90 men – in the ranks of our full-time senior leadership, two years ahead of the target that I set at the start of my tenure, and we have a roadmap for parity at all levels in the coming years”.

The cynics, however, argue the unusually high gender representation may also be a subtle attempt– or a hidden agenda– to stall any campaign for a female Secretary-General since he has an outstanding track record in the field.

Purnima Mane, a former UN Assistant Secretary-General and Deputy Executive Director of the UN Population Fund (UNFPA) told IPS the call for a woman SG at the UN has been made repeatedly but in the 75-year history of the UN, this call has not met with success.

In the 1975 International Women’s Year, there were special efforts made by feminist groups to get women to be nominated for this position.

Since then, she pointed out, the call has only grown, with multiple groups including groups of Member States banding together to advocate for a woman to lead the prestigious organization.

At the end of his tenure, former Secretary-General Ban Ki Moon of South Korea, was quoted as saying it was “high time” for a woman leader of the UN.

But it was only in 2016, for the first time, there seemed to be some signs of change on the horizon. At one stage, 50% of the proposed candidates were women, she noted.

Prisca Chaoui, Executive Secretary of the 3,500-strong Staff Coordinating Council of the UN Office in Geneva (UNOG), told IPS last year that in the past, despite the existence of competent women in the UN, it has largely been the reality that when women do achieve career progression, it tends to be mostly women belonging to certain geographical groups or regions.

“There are concerns that implementation of the UN’s Gender Parity Strategy may follow a similar pattern. It is crucial that this important initiative ensures a diverse gender parity that includes women from the global South, women of colour, and women from developing and underrepresented countries,” she noted.

Outlining some of the steps he plans to take in the future, Guterres said last year: “I have reminded the entire senior leadership team about the special measures we have in place to advance parity throughout the system”.

Antonia Kirkland, Global Lead on Legal Equality & Access to Justice at Equality Now, told IPS since the United Nations was founded in 1945, there have been nine male Secretaries-General but not one woman.

“This is unacceptable and needs to change. “Unfortunately, the campaign to select a woman as the next leader of the United Nations ended in disappointment in 2016, despite there being numerous highly qualified and eminent women candidates with impressive resumes in the running”.

She said this was abundantly clear for all to see thanks to an unprecedentedly more transparent new selection process that was actively supported by 1 for 7 Billion and others.

“It is high time that a woman Secretary-General is finally selected to lead the United Nations and we hope that 2022 heralds the election of a woman, one who adopts and implements a feminist agenda to advance women and girls rights globally.

He was unduly hampered from doing much during his first term, which sadly coincided with that of Donald Trump as President of the US. As the whole world knows now, Trump did not care much for international organizations and was an anti-UN unilateralist.

“In the absence of a more supportive US president, Guterres needed to be able to count on the strong support of at least 2 or 3 other Permanent Members of the Security Council and some of the more influential emerging powers and the G-77”.

Nevertheless, said Gautam, Guterres has been generally highly principled, consistent, eloquent and passionate in advocating for a bold agenda on climate change, Sustainable Development Goals (SDGs), Universal Health Coverage (UHC), and gender equality. He has been highly successful in bringing more women in senior positions at the UN.

But still, said Gautam, “Guterres has been a bit too soft-spoken on human rights, and in more forcefully confronting the likes of Saudi Arabia, Hungary, Philippines, Egypt and China on human rights issues.”

But on balance, he has proven to be thoughtful, measured, wise, mature and diplomatically very deft. It will be hard to find another person who combines his qualities and commands the unanimous support of the P-5 in 2021, he added.

“The chances of getting someone worse are far higher than getting someone better, unless the whole election/selection system for the UN’s top leadership positions is completely overhauled, which is highly unlikely at present.”

After Guterres’ second term, in 2026, he said, “let’s hope we will have a revamped election/selection system and several shining female candidates”.

“Already, we should seek a commitment from the UNSC, as well as the UNGA, that they will make every effort to proactively search for a highly qualified female leader as the next UNSG”.

“The world has waited long enough and it is overdue for the UN to exemplify what it preaches about gender equality and women’s empowerment by appointing an outstanding female leader as the world’s top diplomat in 2026,” said Gautam.

Samir Sanbar, a former UN Assistant Secretary-General and head of the Department of Public Information, told IPS, in terms of geographical rotation, it will be the turn of Eastern Europe to field a candidate for Secretary-General.

He singled out Irina Bokova of Bulgaria, the former Director-General of the UN Educational, Scientific and Cultural Organization (UNESCO) and Kristalina Georgieva, the Managing Director of the International Monetary Fund (IMF), also from Bulgaria, as potential women candidates.

“A prominent female candidate with a proven record would present a credible challenge” to Guterres, he added.

Mane admitted that Guterres has made notable efforts to ensure that gender equality is a feature of the UN at all levels and has laid out an ambitious agenda to make this a reality. However, EQUALITY NOW, an action campaign focusing on the UN’s efforts in this area, still ranks his efforts at gender equality in the UN, relatively low in terms of success.

She said much work remains to be done at all levels of the UN on gender equality but starting at the top, would send out a strong signal to the world that the UN is taking its mission for gender equality seriously and that the glass ceiling (or the steel ceiling as it was referred to by some) will truly be shattered in the UN with the appointment of a woman SG.

“The chances of a woman being elected to lead the UN in 2022 are slim,” she predicted. “And the possibility that a first term SG would not be elected for his second term is remote”.

All SGs in the last fifty years of the UN have been successful in being elected to serve two terms, other than Boutros Boutros-Ghali, who was an exception.

It is unlikely that the UN would want to change its tradition in the coming election. However, these are unusual times which have altered geo-political priorities and understanding, and could cause a disruption in set patterns.

She said Guterres has encountered major challenges leading the UN through multiple crises these last five years, including as a result of Covid19 and dealing with a major contributor and Member State, the USA, distancing itself from multilateralism.

It is hard to imagine that UN Member States would want a change in leadership at this juncture, even if these specific challenges are expected to reduce markedly over a second term, should he get one, now that he has indicated his availability for it.

However, Mane argued, his success will depend considerably on the woman candidates who put their hat in the ring now, especially if the list includes some of the women heads of State who have manoeuvred their countries efficiently through the pandemic while coping with other challenges.

The call for women being at the helm of affairs in responding to crises have grown stronger since Covid19.

“Whichever way it goes, one can certainly envision that the current SG’s legacy would be a significantly more gender-equal environment in the UN, including a woman to lead the UN,” she declared.