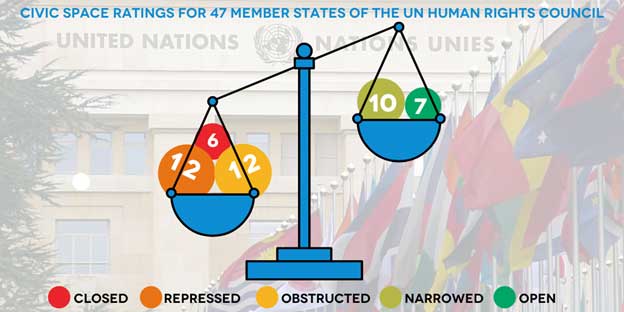 National civic space ratings from the CIVICUS Monitor, which uses up-to-date information and indicators to assess the state of freedom of association, peaceful assembly and expression for all UN Member States. Credit: CIVICUS Monitor

TORONTO, Canada, Feb 24 2021 (IPS) - A month into Joe Biden’s presidency, the U.S. has rejoined nearly all the multilateral institutions and international commitments that it withdrew from under Trump. These include the World Health Organization and the Paris Climate Accords.

Most recently, on February 8th, the U.S. announced it would also rejoin the United Nations Human Rights Council (HRC) as an observer. The U.S.’ role in the human rights forum looks different than it did four years ago in light of its recent track record on civil liberties.

The HRC has two primary functions: to draft and adopt new standards for human rights and to conduct investigations into specific human rights issues. In 2018, U.S. Ambassador to the UN Nikki Haley and U.S. Secretary of State Mike Pompeo announced that the U.S. would be leaving the HRC, claiming that it was a barrier to any genuine global human rights protection. The U.S. had two primary grievances.

First, that the HRC has an “unconscionable” and “chronic bias” against Israel. And second, that the HRC’s membership criteria allows chronic human rights abusers to have a seat on the Council. Neither of which are entirely baseless claims.

Israel remains the only country-specific agenda item covered at every HRC meeting and Russia, China, and Eritrea — to name a few — all currently hold seats on the Council and have some of the worst human rights records in the world. On Monday, the HRC’s 47 member states met for its 46th session, it’s third time meeting since the beginning of the pandemic. The further decline of political and civil rights as enshrined in international law will be an unavoidable hot topic.

The CIVICUS Monitor which rates UN member states’ track records of upholding the legal tenets of freedom of expression, freedom of peaceful assembly and freedom of association finds that 30 of the Council’s full member states routinely and severely restrict these rights.

And in the case of its newest observer state, the USA was recently downgraded to the Monitor’s third worst civic space rating of ‘Obstructed’. The body is a long way off from adequately representing its values.

In the case of the USA, the rating change and decline in rights is reflected by the police response to the Black Lives Matter (BLM) protest movement. During protests in 2020, law enforcement detained thousands of demonstrators, used teargas and projectiles to disperse crowds, and attacked journalists, despite the fact that most wore media credentials.

President Trump and other authority figures encouraged police officers to respond forcefully and, in some cases, requested such violent actions for their own benefit. In a perfect example of this, the Attorney General ordered the use of teargas against peaceful protesters so that President Trump could have a photo-op in front of a church.

While the BLM protests may have made the decline in civic freedoms abundantly clear, this rating change represents a longer deterioration of political and civil rights.

In response, in June the HRC unanimously passed a mandate that called for a report on ‘systemic racism’ targeted at individuals of African descent. Philonise Floyd, the brother of George Floyd, whose murder at the hands of white police officers began the mass protests, called on the human rights body to examine the U.S.’ history of racial injustice and police brutality.

In the end, the final resolution passed by the HRC called for an investigation of systemic racism globally and regrettably did not single out the U.S.

While Biden has rejoined the HRC as an observer, the U.S. must win elections in October 2021 if it wants to regain its seat on the Council. In 2019, Biden said, “American leadership on human rights must begin at home” and — in some ways — it has.

The BLM protests have sparked a degree of state and local level police reform, and Biden has made a commitment to achieving racial equity. While the U.S. should focus on improving freedoms within its borders, it should also not exempt itself from becoming a full member of the HRC again in October.

Former President Barack Obama ran for a seat on the Council because he believed the U.S. could do more to advance human rights as a member of the body. This turned out to be true— the U.S. supported the creation of several important international commissions of inquiry to investigate human rights violations.

If the rationale by Trump was that leaving the council would do more for human rights than holding a seat, it’s clear that this has not come to fruition. Whether it is freedom of speech or the right to peacefully protest, today more of the world’s population lives in ‘Closed’, ‘Repressed’ or ‘Obstructed’ countries as compared to four years ago, finds the CIVICUS Monitor.

Leadership is needed at the UN Human Rights Council on these issues, but it must come from those that have a full seat at the table and have a demonstrated track record of upholding their commitments. The U.S. is currently disqualified on both accounts. Credibility and moral leadership must come from somewhere else.

Instead, the U.S. must support other member states that are leading by example on these issues. Seven members of the HRC — Denmark, Germany, Uruguay, Netherlands, Marshall Islands, and Czechia — are rated ‘Open’ by the CIVICUS Monitor, the highest civic space rating a country can achieve.

These countries are adequately representing the values that the HRC is committed to defending. While there are surely other issues at the HRC that the U.S. will prove influential, the country is far from the inspirational example it often likes to present itself on these world stages.

At the current session of the HRC, which began on February 22nd, the U.S. should champion these members who have made meaningful progress on civil liberties and be prepared to take a backseat on issues that it so obviously falls short on.