NEW DELHI, India, May 31 2021 (IPS) - Four women, two motorbikes, 64 districts and a journey of a lifetime, this is the story of Dr. Sakia Haque from Bangladesh. In November 2016, Dr Haque co-founded “Travelettes of Bangladesh – Bhromon Konya,” a women’s only group, with the motto of “empowering women through travelling.” This platform is not just an ordinary online travel group, but it is a platform of connection, sisterhood and networking of almost 60,000 girls and women in Bangladesh that empowers them by teaching them to raise their voices and encourages them to step out of their comfort zones and to “go see the world”. 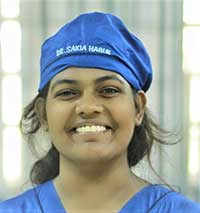 “I believe motorcycles give us freedom, you have amazing views, you can stop whenever you want to and you get to see so much beauty around you,” says Dr. Sakia in an interview to me. “We wanted to prove that women can do it, they can step out of their comfort zones and travel, also because everyone was against it, our families and our society. Have you ever seen a girl ride a bike? They would say this to keep us dependent. It was a rare site, no doubt about that, but now, a lot of women ride scooters and motorcycles.”

When Dr. Sakia is not traveling, she works as a Medical officer, Disease control, Civil surgeon office, at Cox’s Bazar, one of the largest refugee camps in the world. Dr Sakia likes to call herself a full time doctor and a part time traveller. Using her knowledge of medicine and her passion for the outdoors, Dr. Sakia took her travelling as an opportunity to connect with young girls she would meet on the way and engage them in open discussions on their rights, sexual and reproductive health, particularly about menstruation, which is often considered a taboo topic in the country.

“We wanted to go to the root level, talk to women, understand what they are facing and interact with them. What we realized is, it is hard to pour water in a cup which is already full, and that was the reason behind choosing school going girls because we felt we could motivate them more. They were much more open minded towards grasping the idea of empowerment, so that became our goal.”

Dr. Sakia has spent over two years on the road, through highways, small towns, villages, muddy rural roads, including sandy river-chars, stopping at one school in each district/ area they visited. However the road and this journey has not always been an easy one, Dr. Sakia and her fellow volunteers have faced multiple challenges and a lot of criticism for their work. They have been harassed on the roads, eve-teased while riding through cities and even questioned, what and why they were doing what they were doing.

“Women on bikes and traveling alone is not something people were used to seeing, atleast not five-six years ago. But now, women don’t even need Travelettes of Bangladesh to go anywhere, and this is what we wanted, we didn’t want women to depend or rely on any organizations. We wanted them to go on their own, travel on their own, so this has been a major change in the country,” says Dr. Haque.

In Spite of this significant achievement for women in the country, Bangladeshi women and girls continue to face violence in all facets of their lives. In a report published by the Humans Rights Watch, titled, “‘I Sleep in My Own Deathbed’: Violence against Women and Girls in Bangladesh,” draws on 50 interviews to document the obstacles and challenges women face in the country. Human Rights Watch found that “despite some important advances, the government’s response remains deeply inadequate, barriers to reporting assault or seeking legal recourse are frequently insurmountable, and services for survivors are in short supply.”

In an interview given to me earlier by Shireen Huq, a women’s rights activist and founder of Naripokko, a non-profit organization that has been working on women’s rights and impact of sexual violence in Bangladesh since 1983, said “ There is a culture of impunity in the country and when it comes to accessing justice, corruption continues to be a major obstacle. Violence, male dominance and male aggression have existed for years, the tendency to glorify that these things didn’t happen in the past, and that it’s only happening now in our lifetime, is not true. Misogyny has been part of our culture, politics and society for centuries, especially across South Asia.

“At the root of sexual violence there is a culture of misogyny and toxic masculinity that drives it. Looking at the gang rapes that happened in 2020 which sparked off a huge movement in Bangladesh in October, they were all committed by the student wing or the youth wing of the ruling party.”, Shireen said.

According to Ain O Salish Kendra, a Bangladeshi human rights organization, 975 women were raped in the first nine months of 2020, 43 women were killed after being raped and 204 women were attempted to be raped by men in Bangladesh.

Despite a number of major strides made by women in Bangladesh over the past decades, which includes right to vote since 1947, electing its first female Prime Minister in 1991, Bangladesh has the eight lowest gender gap in political empowerment in the world, partially due to the fact that it has had a female head of government for longer than any other country in the world. The proportion of seats held by women in the national parliament doubled from 10 percent in 1990 to 20 percent in 2011.

Bangladesh could be a textbook example of “what is possible when women are involved in decision-making positions”, however unless the Bangladeshi government doesnt take concrete actions, works on making structural reforms against sexual violence and domestic violence against women, and remove obstacles to reporting violence and obtaining justice, no progress can be made in the country.

“The Bangladeshi justice system is failing women and girls with devastating consequences,” says Meenakshi Ganguly, South Asia director at Human Rights Watch. “The government should seize this pivotal moment to implement real reform that could save lives and promote the equal society it envisions,” Ganguly said.

The challenge not only lies in the lack of acknowledgement in government structures, but also in the need to create and put in place gender responsive policies that would pave the way for a more equitable environment.

While Dr. Sakia has managed to shatter a big glass ceiling in the country, making solo female travellers a more common sight than what it was before, she has also challenged the notions of what a woman can or cannot do, including riding a motorbike – with or without the street harassment and violence.

“What women also need to do now is know their value and worth, and believe in whatever they want to achieve. Collective workshops are not enough, we have to instill the idea that a woman can be empowered, because she is equal to a man, not just physically, but this equality comes from the mind and her belief system, that’s the change we need,” says Dr. Sakia.