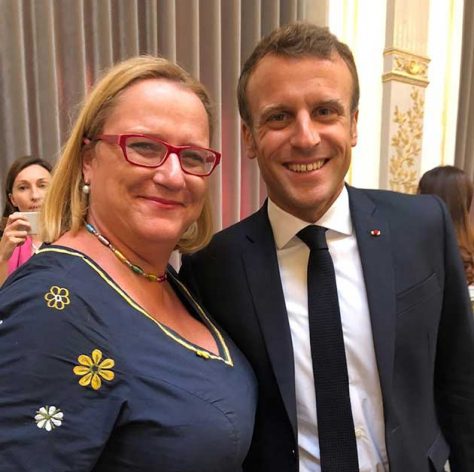 NEW YORK, Jun 28 2021 (IPS) - As the global gathering for gender equality, the Generation Equality Forum, kicks off in Paris on June 30, 2020, IPS conducted an exclusive interview with Katja Iversen.

Iversen is a leading global influencer on leadership, sustainability, and gender equality, an executive advisor to Goal 17 Partners, UNILEVER, Women Political Leaders, and others. She was also on President Macron’s G7 Gender Equality Advisory Council in 2019.

The Generation Equality Forum, convened by UN Women and co-chaired by the Presidents of France and Mexico, comes when the COVID-19 pandemic threatens to reverse global progress on gender equality.

The forum is expected to affirm bold “gender equality investments, programs, and policies and start a 5-year action journey, based on a Global Acceleration Plan for Gender Equality which will be launched at the Forum,” according to a media statement.

Iversen spoke extensively about the need for women to be included in decision-making, the role of the private sector, and how the world is on a tipping point.

“If we want to see positive development for both people and planet, we – in short – need more women in power and more power to women, in the economy and politics,” Iversen said. “The upcoming Generation Equality Forum, hosted by UN Women in collaboration with the governments of France and Mexico, comes at a pivotal moment and provides a great opportunity to catalyze progress. I want to see the whole world reacting to the clarion call coming out of Paris this week”.

She stressed that now was the time to act because “we see a destabilizing and widening inequality gap in the world. We also see a growing conservatism and pushback on women’s rights, including sexual and reproductive health rights (SRHR). And very concretely, we see skyrocketing increases in gender-based violence, enhanced misogyny, women carrying even more of the unpaid care work, as well as alarming rates of girls dropping out of school, and women leaving the labor force”.

She spoke about the need to involve the private sector in creating a more gender-equal world.

She and Goal 17 Partners, a network of executives and entrepreneurs integrating the UN’s Sustainable Development goals into business practices, are working with new companies who are getting engaged in the SDGs, including SDG 5 on gender equality and women’s empowerment. Together, including UN Foundation, UN Forum on Business and Human Rights (BSR), UN Women, they have been shepherding commitments to Generation Equality.

“There is a tremendous need AND potential, not least for small- and medium-sized enterprises, whether we are talking women’s leadership, equal pay, parental leave, financial inclusion, diverse, inclusive and harassment-free workplaces, or health and education. Investing in the various aspects of gender equality is both the right and economically the smart thing to do, research shows”.

Regarding research, Katja Iversen spoke to IPS about the need for better and more data and research: “Decision-makers, whether in governments, funding institutions or private sector, need to invest in and get more and disaggregated data. If we don’t know the details of how many or where girls and women live and die, work and want to go to school, give birth or care for the sick, whether they are rich or poor, we won’t get the right policies, programs, or investments that can drive the needed solutions.”

She pointed out that according to UN Women, less than 25 percent of national COVID decision-making bodies have women included.

“It is too easy to cut resources from people who are not at the decision-making tables. We urgently need to get many women into leadership, including the COVID response and recovery efforts. All evidence shows that when more women are included in decision making, there is a more holistic approach and both societies and people fare better.”

In that regard, she highlighted some transformational, political commitments that will be put forward at the Generation Equality Forum, including from the vast network of Women Political Leaders, which count thousands and thousands of women ministers, mayors, parliamentarians, heads of states, and leaders from the private sector.

“I believe we will see some real game-changers,” she said.

Iversen expressed concern about the strong need for further funding, not least for women’s organizations on the frontline. It is linked to the recent and severe cuts to gender equality and sexual and reproductive health that could badly affect women and their health, especially in vulnerable communities.

“Adding to what happened during former US President Donald Trump era, the cuts we see right now from several countries, including the UK, will have devastating effects for girls, women, and gender equality, including for the most marginalized in emergency and humanitarian situations,” she told IPS. “The United Nations Population Fund (UNFPA), for example, estimates that with the 130 million GBP (180 million USD) the UK wants to withdraw from the Supplies Partnership, UNFPA could have helped prevent around 250,000 maternal and child deaths, 14.6 million unintended pregnancies and 4.3 million unsafe abortions.”

IPS: UNFPA and its partners estimate the significant health service disruptions by COVID 17 could result in 47 million women in low- and middle-income countries going without contraceptives. How do we deal with this loss of access to the most basic SRH services, especially now that the second wave of Covid-19 is disrupting health services again in many parts of the world?

KI: The shift of staff and funds away from maternal and reproductive health services due to the COVID response is devastating, and it will have ramifications for years, if not decades. We know from Ebola that maternal mortality went up, that access to family planning went down, and that girls and women paid the price in both lives and livelihood. Unfortunately, the evidence is mainly anecdotal as women’s health is not documented and measured the same way as other health services, just as there, in general, is a tremendous lack of sex-disaggregated data, including on key Sustainable Development Goal (SDG) indicators and in COVID infections and deaths. This time – under the COVID pandemic – the gaps in SRHR services, shifts in resources, and cutbacks on services must be documented – in data and stories.

KI: I am thrilled to see SRHR and bodily autonomy being a priority of Generation Equality and to see countries like Denmark, France, Burkina Faso, and UNFPA, etc., lead on this.

A woman’s right to decide on her own life and body is a fundamental human right. Bodily autonomy for girls and women – in all their rich diversity – is political, social, economically, and health-related. It is about having the power and agency to make choices over our own body, fertility, and future, living a life free of violence and coercion in both the private and public sphere, deciding who to have sex with and how to love. It’s about the right to decide whether to get children – or not – about having a health system that supports this with the full range of SRHR services readily available, affordable, and accessible. Bodily autonomy ties into norms, structure, systems – and if we want equity and health for all, we need to address all of it. I am glad to see this included in the progressive Generation Equality roadmap, with strong suggestions on how to counter gender-based violence, climate change, promote economic justice and feminist movements and leadership, etc.

The world is at a pivotal moment and a tipping point. With enough people and institutions reacting to the Clarion Call from the Generation Equality Forum in Paris, I believe we can make it tip the right way.