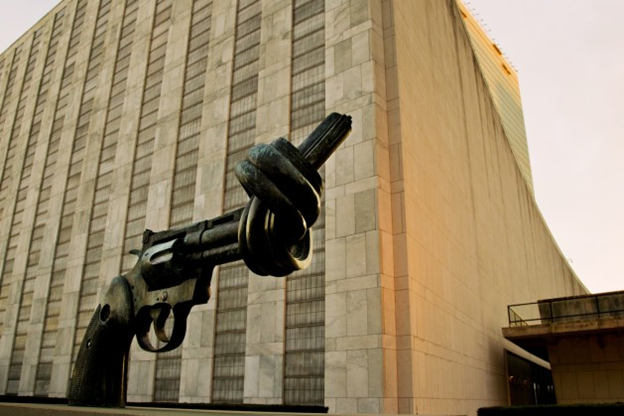 COLOMBO, Sri Lanka, Jul 14 2021 (IPS) - The only Planet in the Universe with living beings, including animal and plant life is the Planet Earth. Can we transform it to a Utopia, more or less, a Paradise. Yes, we can. Why not? If all Nations of the Planet have a genuine desire to have eternal peace and harmony, without recourse to a course that will lead to the destruction of the Planet to smithereens.

The end of the World War2 gave birth to the United Nations Organization in 1945. Leaders of all Nations, collectively, framed the UN Charter and adopted it as the Gospel of all Nations of the world. The primary and the fundamental objective of the UNO, inter alia, was the prevention of a recurrence of another World War and its calamitous consequences to the Planet Earth.

That is, to banish wars of any magnitude, limited or world- wide, from the face of the Earth. The World has been saved from the scourge of a multi-dimensional war for the last 76 years. But the absence of such a war does not mean the World has secured eternal peace and harmony. Limited wars, persists, including terrorism, around the world, in localized regions.

Can Peace Co-exist with Armies in place?

How could one banish wars from the Planet Earth, while nations retain armies? Isn’t the clarion call for World peace, in the midst of military, naval and the air forces, ironical, antithetical and self-defeating? It is like giving a gun to an individual and asking him to practice peace. What is true of the individual is greatly true of nations with armies.

The primary purpose, and the only purpose of an army, is to wage war and fight. That is what armies are for. The mere existence of armies is an act of violence. Armies are not meant for to practice “Ahimsa” and Non-violence. Having armies means the intention to wage war. It cannot have any other intention.

The only deciding factor is the point of time. If private people are allowed to carry guns, what will happen? There will be chaos and mayhem in such countries. Naturally, all citizens will carry weapons to defend themselves from being attacked by other fellow citizens. 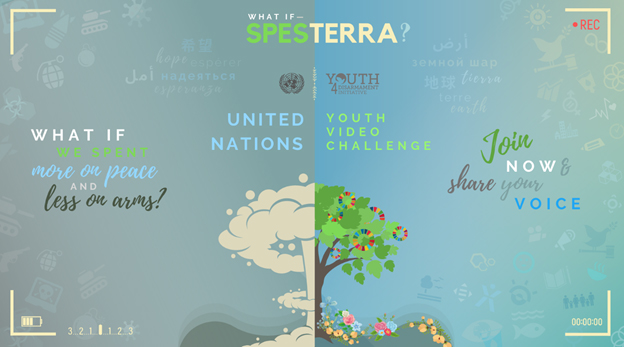 What if we spent more on peace and less on arms? The United Nations General Assembly declared 2021 the “International Year of Peace and Trust”. It is also the first year of the Decade of Action to usher in ambitious steps to deliver on the 2030 Agenda for Sustainable Development. Against this backdrop, the UN Office for Disarmament Affairs (UNODA) launched the “What if — Spesterra” Youth Video Challenge to stimulate young people’s interest and knowledge about the vital way disarmament contributes to a safer, more secure and sustainable world for all. Credit: UNODA

This applies even more to countries in a macro scale. There can never be peace and harmony. Apparent peace is only an interlude; A lull between war and peace. But never will it be an everlasting peace on the planet.

It would be argued that countries must have an army. It is a necessity to defend itself from external threats of aggression, invasion and conquest. That is because it is the norm for all countries to have standing armies. Therefore, the need for defense against threats, arise.

If countries don’t have armies, where is the threat? If the possibility for offence is eliminated altogether, the need for defense is superfluous. This leads to competition among the countries. Each country wants to outdo the other in their capacity to defend.

Human civilization has reached its peak in progress and advancement. Isn’t having armies armed to the teeth with weapons to cause death and destruction, an insult to the intelligence of civilized human beings? Is it compatible with the so called higher human civilization?

Comparatively, there had not been a major international war for the last 76 years. Practically, national armies have been hibernating. To have armies without a war is a waste of human and material resources of countries. It does not contribute to the Gross National Product (GNP) of a country.

Moreover, armies existing within a country side by side with other higher and noble Institutions like Universities, Churches, Temples, Mosques, dedicated to religion and spirituality is a contradiction; an unholy existence between the Demon and the Divine.

Modern armies fight with technically advanced weapons by just pressing the trigger that kill, maim enemies in thousands per second. There is nothing courageous or heroic than the compulsive survival instinct to kill the enemy before he kills you.

Those who win wars with such ease with machines are decorated with medals and titles, which they egregiously display on their uniform lapels, for killing human beings. Isn’t this barbaric and uncivilized; A refined form of tribalism.

The existence of armies inevitably leads to production of armaments in factories. Today, production of military hardware is a lucrative trade of bigger and powerful nations. What you produce needs to be sold. So, nations create a demand for weapons and military hardware by fomenting belligerence in vulnerable countries and even promote insurgencies and terrorism.

World terrorism is a by-product of nations having armies. How can preaching of world peace and harmony can be achieved in the prevailing context on Planet Earth?

Thus, other vulnerable countries are de-stabilized, and covertly instigated, and promote conflicts and belligerence, insurgencies, and terrorism in other countries for profitable business. One cannot talk of universal peace and harmony and a planet free of wars, unless and until the instruments of wars, such as standing armies, armament production facilities, deadly sophisticated weaponry, nuclear arsenals, inter-continental ballistic missiles (ICBM) and the next logical extension of biological weapons in the form of disease as an agent to kill, which is the next goal of powerful nations, are disbanded, dismantled and completely wiped out of the Planet Earth.

This is not impossible if leading nations have a firm and committed will and sincerity of purpose to achieve eternal peace and harmony on the Planet Earth.

Total disarmament is the only panacea for Peace and Harmony on Planet Earth Thus, if armies exist as a norm for the need for nations’ defense and security against possible external aggression and invasion, stockpiling of weapons and military hardware and other infrastructures, becomes a necessity and cessation of wars between nations, terrorists’ insurgencies, are an impossible goal to attain on Planet Earth.

After all the UNO is the world’s apex forum with a membership of 193 nations, big and small. All nations should voluntarily accede to adopt a Universal Convention or Agreement to do away with armies and dismantle all military hardware, infrastructures and production of weapons.

Once this ideal is achieved, permanent and irreversible peace and harmony would rein on Planet Earth. Planet Earth could be truly transformed into a Utopia.

Analogy between the Planet Earth and Countries

Planet Earth is a gigantic territory. Its population is contained in pockets of countries, which have defined boundaries. On a macro scale each country is a human settlement. The oceans, seas and the space above commonly belong to all countries.

Likewise, countries population is contained in pockets of territorial units of human settlements as homes, residencies and institutions. Rivers, lakes, forests within a country are common and belong to the country, the State. This similarity or analogy between the Planet Earth and each country, will logically demonstrate that what happens within a country could possibly happen in the Planet Earth, also.

Thus, peace and harmony prevail in countries between human settlements. There may happen riots and mob violence at times, which are quelled by the State’s Law and Order arm, the Police Force not by guns, but by such devices as batons, tear gas, water cannons.

The fact that no one has arms and armories is the only and prime reason for the prevalence of peace and harmony in the territorial settlements. If this is possible within countries, why cannot there be peace and harmony between countries of the Planet Earth when armies and armaments are abolished?

Why should this be brushed aside as an ideal and theoretical proposition? It can be made a practical reality. What is needed is the will, dedication and commitment of all countries to voluntarily accede solemnly under Oath to an International Convention or Agreement to abolish all standing armies and dismantle all military hardware and infrastructures, including nuclear reactors.

The sole responsibility and onus lie with the United Nations Organization. This is not an ideal dream but a realizable goal. Once this is achieved, there is no need to labor for World Peace and Harmony. It will come automatically and naturally.

The Ideal, Theoretical and the Practical

My thesis for a Utopian Planet Earth would be received with expected contempt, and derisively dismissed as an idealistic dream, theoretical and impractical by the realist pundits. The world is full of practical minded realists. These practical men are an obstacle for human progress. Idealists are branded as fools and day dreamers.

Pragmatists call themselves realists. They little realize that all action, practice and reality were born out of an idea. Idea precedes practice and not the reverse. Realists are pessimists who accept the faulty and the imperfect as immutable reality. They accept the state of things as they are, as sacred and inviolable whereas, the idealists want to make the imperfect, perfect. The realists want to live with it.

That is the difference between the idealists and the realists. The latter consider themselves skillful and diplomatic with the ability to navigate through the existing reality and function within its parameters. Skillful diplomacy is another word for deceit and cunning. But the Idealists need only sincerity and honesty and will to overcome practical difficulties to realize their visionary goal.

Firstly, the immediate and direct consequence of total and complete disarmament is undoubtedly, the Planet Earth will be free of wars between nations and within nations. Peace and harmony will reign supreme. All disputes between nations and within nations would be settled by dialogue, discussion and negotiation directly between nations, if necessary under the auspices of the UNO; Failing which, adjudication by the International Court of Justice, should be made mandatory and its decision will be final and conclusive.

Secondly, the need to defend one’s country and its territorial integrity against any foreign threat will disappear. Countries’ allocation of large portion of their National Income for defense in their budgets too will disappear. This resulting savings from human and material resources will be available for allocation to other vital segments of economic development, such as education, health, and investment on economic development, Infra-structures, poverty alleviation and raising the general standard of living of its citizens. It will increase countries’ national wealth and prosperity.

Fourthly, abolition of armaments production facilities of countries will result in non-production of weapons. This will mean the complete closure of supply chain of weaponry around the world for terrorist outfits, and terrorism will die a natural death.

Fifthly, the Planet Earth would be turned into a Utopia, where peace and harmony, will be the norm. It is the only option opened to mankind to save the Planet Earth from total destruction from nuclear and biological wars with disease as a weapon, to which we are heading , if not in the near but certainly in the remote future.

The writer, who describes himself as a world citizen, is a peace activist with an abiding interest in the preservation of Planet Earth. He has been influenced by spiritual celebrities like Swami Vivekananda, Sadh Guru, Jiddu Krishnamurti and others.

He can be reached at: sahapalan@gmail.com