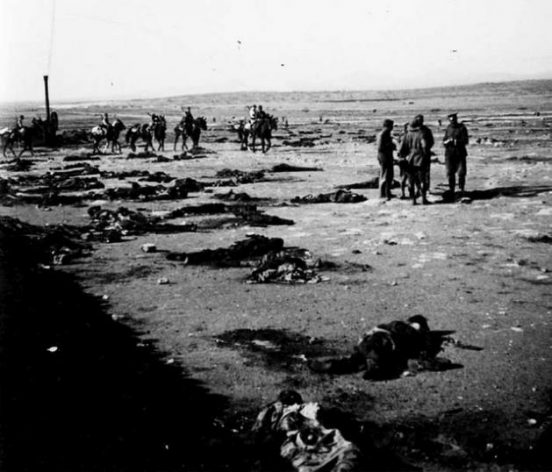 MIAMI, Jul 20 2021 (IPS) - It would seem that those responsible for the recent immigration crisis in Ceuta and Melilla have coordinated their strategy to commemorate the centenary of one of the most serious defeats that Spain has suffered in its foreign relations. One hundred years ago, the Spanish armies suffered one of the most painful losses in its history.

From July 21 to August 9, 1921, the military detachments that had tried to consolidate the colonial presence in the territory of the Riff, north of the northern area of ​​the so-called Protectorate located on the Mediterranean slope of the present Kingdom of Morocco, were bloody massacred in the so-called Annual Disaster.

This episode has been imprinted in the memory of not only of the military, but also in the national conscience.

In succinct terms, what happened in North Africa in the second decade of the 20th century was a consequence of a more spectacular disaster suffered by the Spanish empire at the end of the previous century. As a resounding burial of the Spanish empire, which had lost almost all American territories in the 19th century, in 1898 the United States ended the Spanish presence in Cuba, Puerto Rico and the Philippines, by imposing the surrender and cession of those territories after the incident of the sinking of the battleship Maine in the bay of Havana.

Embarrassed by the defeat, the Spanish military passed the blame for the awesome disaster onto the politicians. The final traumatic event originated various consequences in Spain, among which are a period of introspection and meditation on the national essence, presided over by the “Generation of ’98”, and the emergence of a regenerationism led by various sectors of public influence.

While the monarchy in the regency period could hardly stand out in remedying the state of national prostration, the military was preparing to seek the construction of a substitute empire.

In continuation of the previous incursions in North Africa, the coalition of conservative forces with military sectors, in search of alternative companies to the loss of the imperial territories, believed to find a replacement empire in North Africa.

The recruitment of military contingents based on forced replacement troops produced the serious incidents of protest at the ports of embarkation. The opposition that originated the so-called Tragic Week of Barcelona in 1909 stood out then, with the result of a fierce repression. The government survived. Spain was destined to invent another empire.

The distribution of the immense African territories among the European powers resulted in the award to Spain of the northern part that comprised the Riff, with a rugged geography populated by a human contingent that has hardly been identified with the precarious unity of Morocco.

The administration of the so-called Protectorate would be a difficult mission to fulfill until its disappearance. The withdrawal order had its holocaust in the place called Annual, where the Spanish detachment of eleven thousand five hundred soldiers was massacred and the survivors were put to the knife. These bloody events were novelistically relived by important writers such as Ramón J. Sender.

In this scenario, the Spanish Legion was founded, following the model of the French. Led by Millán Astray, one of its most prominent leaders was Commander Francisco Franco, who rose through the ranks on merits of war and later became the youngest general in the European armies.

The positions of the Spanish military in North Africa were desired both by the commanders and by the troops themselves who were involved in corruption.

Almost miraculously saved the city of Melilla, the Spanish presence received a considerable effort with the joint operation of the Spanish and French forces in the so-called landing of Al Hoceima (exaggeratedly considered as a precedent of the Normandy operation), a coastal area that still presents the survival of the Spanish “presidios”.

As a result of that remarkable joint operation, the Riff’s leader Abd el-Krim surrendered and was subsequently released. He survived his many adversaries and died in Cairo in 1963. He is considered one of the “inventors” of guerrilla strategy.

The monarchy of Alfonso XIII survived when he handed over power to General Primo de Rivera, but after his fall from grace, the institution soon disappeared when in the municipal elections of 1931 the conservative parties lost electoral favor in the big cities.

The King abdicated and the Second Republic was declared. In 1936 Franco rebelled. The troops led by the coup general left from Morocco at the beginning of the Civil War.

Ceuta and Melilla are remains of that neocolonial stage, recently converted into “autonomous cities” within the Spanish territorial administration. Despite the abandonment of the territory of the Sahara, as a result of the Green March of 1975 when the Franco regime died, Spain insists on the evaluation of the UN opinion subject to a referendum that Morocco has refused to carry out, claiming sovereignty over its inhabitants, a thesis that clashes with that of Algeria, where the Sahrawis take refuge.

Although Morocco’s tactic seems focused on the occupation of Ceuta and Melilla, in reality the priority is the control of the entire Sahara and domination of the southern slope of the Strait of Gibraltar. This strategic detail is a priority for the United States, which has generally supported Moroccan interests, as has France, a power that in turn supports Algeria’s theses.