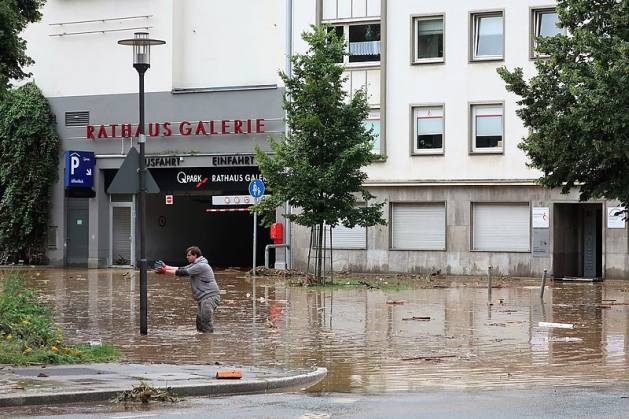 Jul 22 2021 (IPS) - Almost 200 people dead and many others still missing. Billions of euros’ worth of damage. Communities devastated. Thousands of homes destroyed and their occupants traumatised.

I am a flood forecaster who helped to set up the forecasting system that was used to predict the recent floods in Germany and surrounding countries. I saw days in advance that they were coming. I read reports of rainfall and river levels rising. And then I watched with growing horror as the death toll surged.

The European Flood Awareness System (EFAS), which I helped to set up, is part of the EU’s Copernicus Emergency Management Service. It provides early information on flooding to national and local authorities across Europe. I work closely with people there in my role as an independent flood scientist at the University of Reading to improve and analyse EFAS data. I don’t work in the team that issues early flood information to authorities, but looking at the data with colleagues, I could see early on just how serious the floods looked.

What is the use of a perfect forecast if the people it is supposed to warn cannot see the danger they are in? Effective flood warnings require people to be able to see into the future and imagine their house full of water, to assess the likelihood of that happening, and to see the multiple paths they could take to keep them, their family, and their property safe.

Forecasts on Friday July 9 and Saturday 10 for the Rhine catchment, covering Germany and Switzerland, had shown a high probability of flooding that would begin on Tuesday July 13. Subsequent forecasts also showed the Meuse in Belgium would be affected. The forecasts in the following days showed that there was little doubt that a major flood was coming.

EFAS sends out bulletins of early information which are designed to be read, understood and acted on by experts. They are not directly available to the public. Public flood warnings come from the national and regional weather, environment and civil protection agencies, and EFAS information needs to be used by these authorities alongside their own forecasts.

The first EFAS bulletin was sent to the relevant national authorities on Saturday July 10. More updates continued over the following days as more precise predictions became available. Formal flood notifications were issued to authorities in Germany, Belgium, Netherlands, Switzerland and Luxembourg, as well as the Emergency Response Coordination Centre (ERCC) of the European Commission throughout Monday and Tuesday.

As the event neared and uncertainty in the forecast shrank, the predicted start of the flooding was pushed to Wednesday for smaller rivers and Thursday for the larger downstream rivers. Around 25 individual warnings were sent out to parts of the Rhine and Meuse.

The German weather service, DWD, had independently forecast extremely high rainfall too and issued warnings for more than 200 mm of rain in the same areas several days ahead of time, saying that flooding was possible. Regional warnings were also issued, for example by the Environment Agency in the German state of Rhineland-Palatinate, one of the areas hit particularly hard by flooding.

The floods that did happen matched the scale and distribution of those that were forecast several days before. I was very surprised, therefore, that so many people died, given that authorities knew about the event and had sufficient warnings to get people to safety before the floods began.

Clearly, tragically, the whole system designed to save lives by ensuring people act on warnings before floods arrive, did not work as it should have done. It may be that individual parts of the system worked exactly as they were designed, and it is certainly true that forecasts were accurate, and there were some warnings issued through official channels. In some areas, many authorities did act in time, to evacuate people, erect temporary flood defences, and move vehicles to higher ground. But this clearly did not happen everywhere.

In the middle of an election campaign, some German leaders in national and regional government still seemed to defend the locally-devolved nature of disaster management in Germany, insisting that the warnings were adequate and agencies did their work well. It is like claiming that the maiden voyage of the Titanic was a success because 99% of its engineering worked perfectly throughout. While their arguments may be true on an individual scale, unless those in power admit that the system ultimately failed, they risk failing to learn lessons and put others at risk in the future.

Science, in large part, is about helping people see the invisible. What is the use of a perfect forecast if the people it is supposed to warn cannot see the danger they are in? Effective flood warnings require people to be able to see into the future and imagine their house full of water, to assess the likelihood of that happening, and to see the multiple paths they could take to keep them, their family, and their property safe.

I recently took part in an exercise encouraging scientists, from senior professors to school pupils, to trace the path of water in a river through time using just their imagination. Weeks later, we are seeing what happens when people cannot visualise the threat of a river ripping down their street, or a lake appearing in their house. These are the elements of flood warnings that must improve.

As climate change increases risks from heatwaves, fires and floods, we need to not only slash emissions but prepare ourselves for the problems we already have in store. Even with sufficient decarbonisation measures – which we are still yet to see from any major government – there is no avoiding the consequences of a hotter, more turbulent environment.