Afghan Female Journalist: “I may not be Alive by the time US can Evacuate Me”

The writer is Features Editor, Committee to Protect Journalists (CPJ) 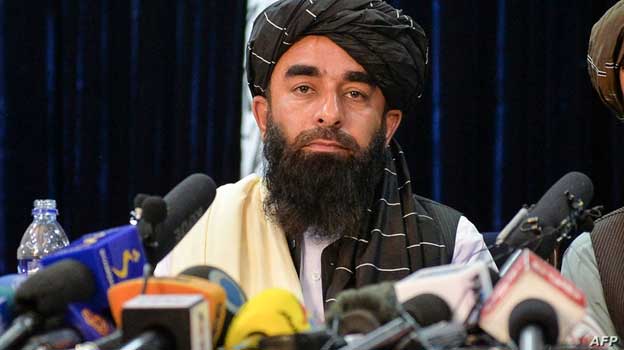 Taliban spokesperson Zabihullah Mujahid looks on as he addresses the first press conference in Kabul on Aug. 17, 2021 following the Taliban stunning takeover of Afghanistan. Credit: Voice of America (VOA) News

NEW YORK, Aug 19 2021 (IPS) - Steven Butler describes it as “mass panic.” As the Taliban seized control of Afghanistan, CPJ’s Asia program coordinator has been fielding “hundreds and hundreds” of daily pleas from journalists asking for help to flee the country.

Butler, along with CPJ Asia research associate Sonali Dhawan and the organization’s Emergencies team, are now in the process of vetting those requests.

Many Afghan journalists told CPJ they are too afraid to speak on the record. To get a picture of what’s happening on the ground, I spoke to Butler and Dhawan via video about what they have learned. Their interview has been edited for length and clarity.

When did CPJ begin getting requests for help from Afghan journalists?

Butler: The requests for help from journalists who wanted to leave Afghanistan because they saw the Taliban coming started early this year. It was a trickle at the time and then it started to crescendo in July and increased by early August.

We are getting hundreds and hundreds of requests for help every day now. Many of them are journalists and some of them are not journalists, they are just trying to find a way out. It has completely flooded our system. We are doing the best we can. We have four people working on analyzing and looking into individual cases.

We value our reputation for thorough documentation on everything we do and are applying our same standard to this — we are trying to document the cases as the best we can, because we are recommending them to the U.S. government for emergency evacuation.

What can you tell us about the chaotic scenes at the airport and what it means for journalists?

Butler: As of Tuesday the area has been secured and there is a perimeter. Anytime you have a military perimeter you have a problem, because there is an outside and there is an inside, and the outside is going to be controlled by the Taliban in one way or another, so the challenge has been to figure out how to get people through an insecure situation on the streets of Kabul, how to get them checked in through this military perimeter including additional checks by the U.S. military, and then get them on to flights. We have had people that have failed to get through.

Why are Afghan journalists so desperate to leave?

Butler: As the Taliban have extended their control over the provinces, we have seen them close down media outfits and substitute their own personnel. That hasn’t always led to people being killed or put in prison necessarily, but nonetheless journalists in Afghanistan are concerned that they are going to be pushed out of their profession — at the minimum. There are a number of very prominent journalists who have been harassed or chased by the Taliban and who have gone into hiding.

What specific threats against journalists are you hearing about?

I spoke to a journalist who was covering the Taliban takeover of a northern province — the Taliban came to his home after his reporting and they chased him out of the home. He ran away and they fired shots behind him and he managed to escape and get to Kabul. In the days after he escaped, he continued to receive calls that said, “We will find you.” Another prominent female journalist told me she received threatening calls in recent days from the Taliban that said, “Your time is over.”

One other case that I want to highlight is the takeover of the TOLO News compound, which is arguably the most prominent news channel in Afghanistan, a 24-hour channel that has covered a wide range of events and produced very critical coverage as part of this post-2001 media boom in Afghanistan.

The Taliban have interestingly taken over the compound but are still allowing journalists to broadcast, and female journalists actually came back on the air today. But we are seeing that a number of women and ethnic minority journalists are continuing to be threatened and the Taliban are showing up at their homes.

What is the Taliban presence like at TOLO News? How are the journalists there continuing to report?

Butler: It looks like the Taliban have stationed armed people around the outside of the compound mainly. When they entered the premises [on August 16] they took away government issued weapons from TOLO security but they allowed privately purchased weapons to remain.

People who have watched the recent news broadcast say it is much toned down. The women are appearing with headscarves and more conservative dress. It is really unclear what is going to happen and why the Taliban have taken what seems to be a softer approach to TOLO compared to other radio or broadcast operations in the provinces.

Are they trying to create a kind of appearance for the international community because TOLO is the best known? That is one possibility. Have they changed? They say they welcome press freedom and they are allowing women to operate in certain professional positions. I don’t think that people are taking what they say at face value. There is a lot of skepticism given the documented history of brutality by the Taliban.

What specifically did the Taliban say about press freedom?

Dhawan: The Taliban spokesperson, Zabihullah Mujahid, conducted a press conference [yesterday] and it really goes to show how brave Afghan journalists are because they were asking really tough questions, particularly about women in the country.

He said the Taliban will allow all media outlets to continue their activities on three conditions, the first being there should be no broadcast that will contradict Islamic values, the second that they should be impartial, the third that no one should broadcast anything against the national interest. What we are seeing on the public platform is not matching the realities on the ground, because several radio stations in provinces, newspapers, and news outlets have shut down amid fighting as the Taliban took over.

What is the Taliban trying to convey with these comments about press freedom?

Butler: I would look on it pessimistically. Governments use this kind of double talk all over the region and all over the world to find ways to restrict what journalists do. It could well be that the Taliban have seen what other countries are doing in terms of rhetoric and are imitating it.

It is a fact that democracy and press freedom are values that are universally spoken about but only rarely fully embraced. I think that we may see that pattern repeat itself in Afghanistan. Hopefully not. Hopefully they actually believe what they are saying, but we will have to see.

You mentioned that female journalists are at particular risk. What else are you hearing from women?

Dhawan: Most of the female journalists I have spoken to are absolutely terrified and have left their homes and gone into hiding somewhere. This is because there are several local reports of women journalists who have had their homes searched or the Taliban have showed up at their homes. And that is a particularly traumatizing experience.

A lot of women journalists who work in the fields of arts and culture or education are equally terrified. I know of several women journalists that work in these fields and are actively receiving threats from the Taliban. The Taliban did show up at the home of one very prominent journalist and said they would come back to her home and are looking for her.

What other journalistic beats could draw the attention of the Taliban?

Butler: Journalists have a history of their own work that lives on social media. I have been told that many journalists are now trying to scrub their social media profiles and deleting articles to try to hide that past. It is hard to say going forward what are going to be the sensitive issues, but journalists who were highly critical of the Taliban in the past could face a kind of reckoning.

You described a “media boom” in Afghanistan after 2001. Can you say more about what is at risk of being lost at this moment?

Dhawan: Afghan journalists have done incredibly thoughtful and diligent work over the past 20 years to build a thriving press. They have braved the dangers of a military occupation, the presence of militant groups in the country and they have reported critically during these extremely dangerous times.

The precipitous withdrawal of U.S. forces from Afghanistan has led to a complete collapse of the government and security forces, leaving journalists at severe risk of violence. There are simply no avenues for journalists to seek protection from authorities and they are essentially relying on their own community, their neighbors, and family members for protection at this point.

As much as there is a need for journalists to get out of the country and CPJ is doing its best to do that work, journalists who want to remain in the country must be allowed to freely report on the extent of a humanitarian crisis that is about to occur.

Butler: The international community totally failed to create a stable democracy, but they did succeed in creating a thriving press. There was a lot of money – U.S. government money, USAID, private foundation money — to support and get these operations going because of course a free press is the absolute foundation of democracy. It stuck.

We had a case a couple of weeks ago of people being forced into an interview with a Taliban local commander and made to promise that they would broadcast the interview. They came back and refused to do it because it wasn’t good journalism just to broadcast one side, so they went into hiding in Kabul.

They got some of the lessons of what good journalism consists of and if you look at TOLO News, all these news outlets, a lot of it is quality journalism. And, of course, the international press relied heavily on local journalists. This is really a remarkable achievement and it would be a terrible shame for it to disappear completely. It would be wonderful for some of that spirit of press freedom and quality journalism and reporting to live on even if the previous government, the collapsed government of Afghanistan, no longer exists.

Before I let you get back to your work, is there anything else that has struck you from this past week that you’d like to share?

Dhawan: I was in contact with a journalist who is being actively threatened by the Taliban. She has been messaging me every day, afraid for her life. She is sheltered in a hotel right now and I told her we are working with the U.S. government to evacuate her and will continue to provide updates about her case as soon as we receive them. She said, “I may not be alive by that time.”