Any End to This Suicidal War? (I) The Destruction of the Web of Life 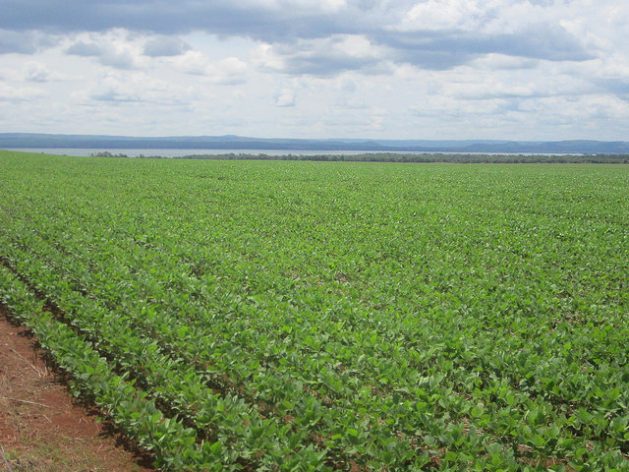 More than 6,000 plant species have been cultivated for food. Now, fewer than 200 make major contributions to food production globally, regionally or nationally. A sea of soy is seen near the city of Porto Nacional, on the right bank of the Tocantins River, Brazil. Credit: Mario Osava/IPS

MADRID, Oct 28 2021 (IPS) - Can yet another dispendious world gathering find a way to halt the ongoing suicidal war on Nature, which is leading to the destruction of all sources of life?

The answer appears to be a bold “no” in view of the business-oriented practices, which deplete biodiversity, pollute the oceans, rise sea levels, cause record temperatures, provoke deadly droughts and floods, and push millions to flee their homes as climate refugees, in addition to more millions of conflict and poverty displaced humans.

Our war with nature includes a food system that generates one third of all greenhouse gas emissions and is also responsible for up to 80 percent of biodiversity loss,
António Guterres, UN Secretary General

The gathering is scheduled to take place between 31 October and 12 November 2021, in Glasgow, in the UN Climate Change Conference (COP26), hosted by the United Kingdom in partnership with Italy.

Although the premises would sound good as the Conference presidency has proposed a Delivery Plan led by Germany and Canada, to mobilise 100 billion US dollars per year for climate finance, past experiences show that one thing is to promise and a totally different thing is to meet the promise.

Anyway, and regardless of whatever will come out –and be implemented– the scenario appears gloomy.

Take the case of the loss of the variety of life system–biodiversity as just one example.

‘“Our war with nature”, says the UN Secretary General  António Guterres, includes a food system that generates one third of all greenhouse gas emissions and is also responsible for up to 80 percent of biodiversity loss.

On this, the Commission on Genetic Resources for Food and Agriculture (CGRFA) explains that thousands of species and their genetic variability make up the web of life and are indispensable to adapt to new conditions, including climate change.

It also explains that biodiversity for food and agriculture is the diversity of plants, animals and micro-organisms at genetic, species and ecosystem levels, present in and around crop, livestock, forest and aquatic production systems.

It says that biodiversity includes the domesticated plants and animals that are part of crop, livestock, forest or aquaculture systems, harvested forest and aquatic species, the wild relatives of domesticated species, and other wild species harvested for food and other products.

Biological diversity also encompasses what is known as “associated biodiversity”, the vast range of organisms that live in and around food and agricultural production systems, sustaining them and contributing to their output.

And it supplies many vital ecosystem services, such as creating and maintaining healthy soils, pollinating plants, controlling pests and providing habitat for wildlife, including for fish and other species that are vital to food production and agricultural livelihoods.

Despite their vital importance for the survival of humankind, many key components of biodiversity for food and agriculture at genetic, species and ecosystem levels are in decline, warns The State of the World’s Biodiversity for Food and Agriculture.

State of the World’s Biodiversity for Food and Agriculture highlights a set of key facts:

— More than 6,000 plant species have been cultivated for food. Now, fewer than 200 make major contributions to food production globally, regionally or nationally. Out of these, only 9 account for 66 percent of total crop production.

— Overall, the diversity of crops present in farmers’ fields has declined and threats to crop diversity are growing.

— Nearly a third of fish stocks are overfished and a third of freshwater fish species assessed are considered threatened.

— The proportion of livestock breeds at risk of extinction is increasing.

— 7,745 local breeds of livestock are still in existence, but 26 percent of these are at risk of extinction.

While the sharp loss of biological diversity is caused in a high percentage by the dominating industrial mono-culture, agriculture and food system, there is a frequently under-reported link between this and the continuous looting of genetic resources.

Apart from State-owned genetic banks aimed at conserving genetic resources, this process is practiced by giant corporations which collect, mostly in poor countries, seeds and genes of plants, animals, forest and aquatic varieties to patent them as their own property and stock them in their so-called genetic resources banks.

What is the diversity of genetic resources?

The diversity of genetic resources for food and agriculture (i.e. plants/crops, animals, aquatic resources, forests, micro-organisms and invertebrates) plays a crucial role in meeting basic human food and nutritional needs, according to the Food and Agriculture Organisation (FAO).

Plant genetic resources for food and agriculture consist of a diversity of seeds and planting material of traditional varieties and modern cultivars, crop wild relatives and other wild plant species. These resources are used as food, feed for domestic animals, fibre, clothing, shelter and energy.

Forest genetic resources are the heritable materials maintained within and among tree and other woody plant species that are of actual or potential economic, environmental, scientific or societal value.

Trees are the foundation species of forest ecosystems and many of the world’s 60,000 tree species are also an important component in other ecosystems, such as savannas and agricultural landscapes.

This diversity allows organisms to reproduce and grow, adapt to natural and human-induced impacts such as climate change, resist diseases and parasites, and continue to evolve.

But perhaps a sound way to summarise the alarming loss of biodiversity, is what the well-known Prof. Vandana Shiva wrote in her recent Rewilding Food, Rewilding our Mind & Rewilding the Earth.

According to this physicist, ecofeminist, philosopher, activist, and author of more than 20 books and 500 papers, Mother Earth is self-organised. Mother Earth has created and sustained Diversity.