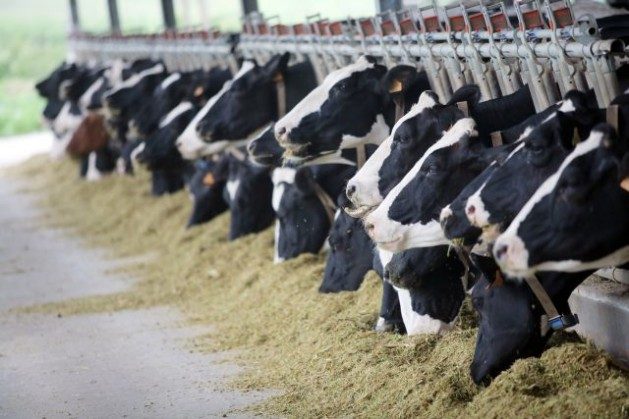 Will the United States and the other major meat consuming countries choose to significantly reduce their beef consumption and move to plant-based diets as part of measures to address climate change, environmental degradation and biodiversity loss? Credit: Bigstock

PORTLAND, USA, Oct 18 2021 (IPS) - Probably no country is more closely associated with the hamburger than the United States. It’s fair to say that the hamburger is the country’s culinary icon. It’s the most popular fast food consumed and readily available from coast to coast.

Although some historical accounts chronicle the hamburger being prepared in Wisconsin in 1885, America’s hamburger affair reportedly began in 1904 when the hamburger made its official visible debut at the St. Louis Louisiana Purchase Exposition. Since then, the hamburger has become America’s most ubiquitous, dominant, and favorite food.

The United States consumes an estimated 50 billion hamburgers annually. That consumption amounts to about 150 hamburgers for each person per year or 3 hamburgers per person each week of the year

The answer to that question is not 1 billion hamburgers. It’s also not 5 billion, nor even 25 billion.

The correct answer is the United States consumes an estimated 50 billion hamburgers annually.

The hamburger has recently emerged as a controversial issue in U.S. politics. Some right-wing groups, politicians and others have warned voters that the Biden administration is “coming for your hamburgers”, cutting 90 percent of red meat from the U.S. diet and limiting each person to one hamburger per month.

The White House dismissed the false claims, saying they were just made up stories with a losing argument. The USDA also called the claims made by Republicans that Biden is trying to limit red meat consumption a fabrication and is not part of the administration’s climate plan nor greenhouse gas emission targets.

However, many in the country, including philanthropists, dietitians, scientists and others concerned about climate change, environmental degradation and biodiversity loss, have called for reducing meat consumption and moving toward a more plant-based diet.

Such a change in the diet of the U.S. population of 333 million people, or 4 percent of the world’s population, would make available croplands for human plant food instead of feed for the country’s 94 million cattle, 77 million hogs and pigs, and 518 million chickens, as well as additional land for increased biodiversity. 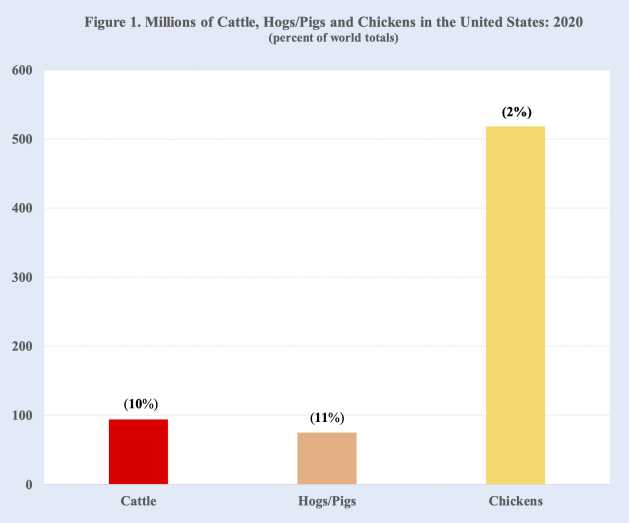 One alternative to the beef hamburger is the veggie burger, which has long existed in many Eurasian diets. The veggie burger has become a growing U.S. fare for many, especially for younger eaters and those with health concerns who are choosing to avoid or reduce their red meat consumption.

Instead of meat, the patty in the veggie hamburger is made from vegetables, legumes, grains, seeds, and other plant-based ingredients. While available in most supermarkets, many have turned to popular recipes to prepare veggie burgers at home.

Several years ago fast food hamburger chains in cooperation with food companies began offering plant-based hamburgers with the taste of meat. Instead of using ground beef, the meatless hamburger is based on processed plant-based foods that are specially designed to resemble the taste of beef. In addition, sales of plant-based meat in supermarkets are increasing rapidly across the country.

The plant-based processed hamburgers contribute less greenhouse gas emissions, use less water and land than the traditional hamburger based on beef. However, those burgers can be high in saturated fats and sodium, both of which are linked to obesity, heart disease and high blood pressure.

Some U.S. elected officials do not believe that plant-based meat is an answer to climate change and moving towards green energy. Also businesses in many U.S. states object to reductions in meat consumption as it would decimate those working in the beef industry and have collateral economic damage.

Despite the U.S. government’s avoidance of the issue of meat consumption, concerns about climate change, environment degradation and biodiversity loss are challenging the country’s relationship with the hamburger.

Climate scientists have advised U.S. officials that the raising of cattle is unsustainable and generates high levels of greenhouse gases. In addition, producing beef involves the destruction of forests and other habitats to make way for pasture and for growing fodder to be feed for cattle.

The United States accounts for the largest amount of beef consumed annually by a single country. Of the world’s 59 billion kilos (130 billion pounds) of beef produced in 2020, the United States led with 21 percent, followed by China at 16 percent, the European Union at 13 percent and Brazil nearly at 13 percent. Together the top ten countries consumed about 83 percent of the total beef produced in 2020. 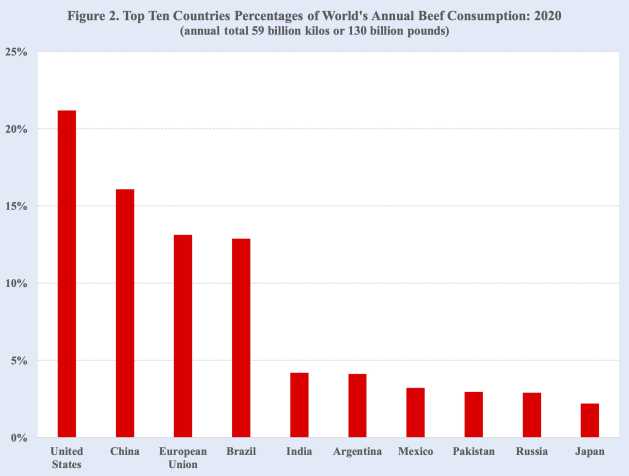 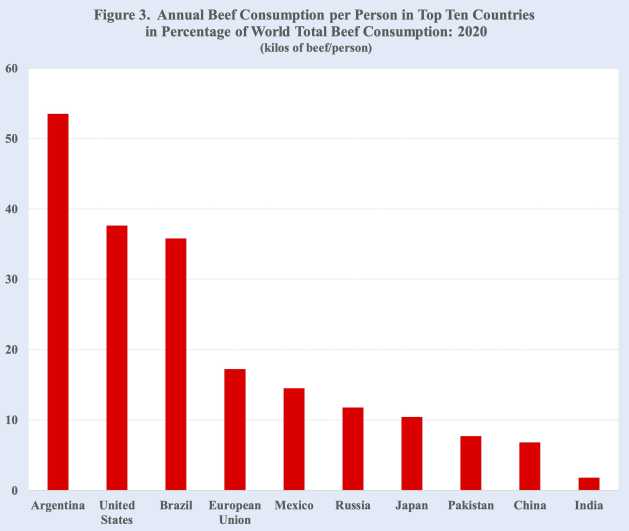 Will the United States and the other major meat consuming countries choose to significantly reduce their beef consumption and move to plant-based diets as part of measures to address climate change, environmental degradation and biodiversity loss?

Politics, business interests, dietary preferences and cultural habits together strongly point to a likely answer to that question. In brief, beef consumption can be expected to continue in the United States as well as in other top major beef consuming countries well into the future.

Perhaps the United States, and maybe even other countries, will end the affair with the automobile, which has resulted in 290 million cars on U.S. roads?

Perhaps the United States, and other countries, will shift to renewables and eliminate fossil fuels, which account for about 60 percent of the electricity generation in the U.S.?

Perhaps the United States, and other countries, will decide to move toward population stabilization, instead of the currently projected U.S. population of 400 million by around midcentury?

Or perhaps more likely, the United States and other countries will simply continue with business as usual with, of course, a large order of fries alongside that hamburger to go with the disastrous consequences of climate change, environmental degradation and biodiversity loss.