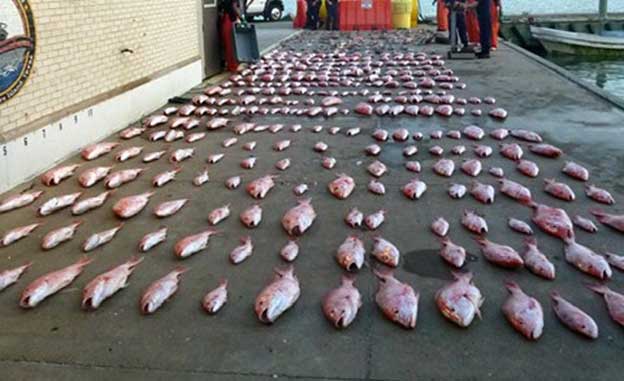 Illegal fishing is not just about stealing livelihood; it is about forcing someone into crime. Coast Guard interdicts lancha crews illegally fishing in US waters. Credit: Creative Commons

As global leaders and civil society actors participate in COP26 in Glasgow, Scotland, illegal, unreported, and unregulated fishing is a significant problem that must be tackled.

In this regard, collaboration among the 55 member states of the African Union (AU) is crucial to successfully accomplishing a common goal to combat the problem of illegal, unreported, and unregulated (IUU) fishing in the African continent’s coastal waters – overcoming a raft of complex and politically sensitive issues.

IUU fishing is an unprecedented problem in the time of climate change that decimates the livelihoods of local fishing communities. The AU must demonstrate strong leadership and present a united front for such collaboration to work, so that the establishment of the proposed Combined Exclusive Maritime Zone for Africa (CEMZA) can achieve impactful results and not be just a paper tiger.

African voices and indigenous expertise in producing scientific knowledge and policies have been marginalized since colonial times including vis-à-vis marine fisheries.

Africa continues to be at a disadvantage on account of the historical processes through which individual countries were integrated into the world’s economic and financial system – often driven by former colonizing powers – e.g., France, U.K.

Therefore, the needs and concerns of local African fishing communities were historically unseen and unheard in national and international deliberations over fisheries. The “new” scramble for African resources, brought a new player to the fore, namely the People’s Republic of China – triggering rapid expansion of Chinese investments, trade, development cooperation and loans aimed at exploiting Africa’s resources.

An increasing number of organizations are exploring AI, data analytics, and blockchain to combat the threat of IUU fishing – as noted by the World Wildlife Fund for Nature (2020) in “How Data and Technology Can Help Address Corruption in IUU fishing” – https://www.worldwildlife.org/pages/tnrc-blog-how-data-and-technology-can-help-address-corruption-in-iuu-fishing.

The arrangements in place are often abused and thus fall short in fighting the impediment of IUU fishing. It is to tackle these significant problems at the operational level that Africa’s Integrated Maritime Strategy proposes to establish the Combined Exclusive Maritime Zone for Africa (CEMZA) – as noted by Vishal Surbun (February 2021) in “Africa’s combined exclusive maritime zone concept” in Institute for Security Studies, Africa Report 32 – https://issafrica.org/research/africa-report/africas-combined-exclusive-maritime-zone-concept.

CEMZA is a future project that remains on paper only for the time being, which needs to be implemented in full to facilitate economic and security benefits for target African countries.

A consequence of the inability of individual African states to maintain law and order, to varying degrees, opened the door to the possibility of some level of continental federalization in the form of CEMZA or combining other zones falling within the African Maritime Domain (AMD).

West Africa presents coastal countries where the problems are particularly felt. The area has attracted industrial fishing boats from all over the world, particularly from China, while controls have remained entirely inadequate in the last decade.

There are irregularities in the Automatic Identification System (AIS) and the non-use or improper use of the satellite-based vessel monitoring system (VMS). On July 22, 2021, the Defense Innovation Unit and Global Fishing Watch, a non-profit that uses satellites to view global fishing activities, announced a new AI challenge to combat IUU fishing to tackle this transnational crime.

Likewise, an international program to track illegal fishing from space has been launched by the Canadian government – as noted by Rosie Frost (January 2021) in “What are illegal ‘dark vessels’ and why are satellites spying on them?” in Euronews – https://www.euronews.com/green/2021/02/25/what-are-illegal-dark-vessels-and-why-are-satellites-spying-on-them. It can use environmental conditions, including the temperature of the water and chlorophyll levels, to work out where the fish will be.

With the fish comes the fishermen and fisherwomen who help narrow down the areas that governmental authorities need to fully concentrate on, thereby helping them locate, identify and interdict illegal, unreported, and unregulated (IUU) fishing.

Such information must be shared with the central body of the combined EEZ not only to gather pieces of evidence but also to assist local fishing communities in earning their livelihood. The current focus on environmental concerns worldwide has drawn attention to the global crisis in fisheries and aquaculture, and the need to manage these industries in environmentally sustainable ways.

An example is the wooden pirogues mainly in use in West Africa from Mauritania to Senegal, on which a crew composed of less than ten people usually embark and stays at sea for a few days. Canoes, gillnets, and handlines are used widely throughout Africa, while the use of indigenous industrial fishing vessels is still few, numerically.

The activities connected to the fisheries sector, characterized by high labor-intensity and low capital, employs millions of people throughout West Africa. In today’s world many people look to information and communications technology to go about their daily business. Fisherfolk in Africa also need access to technological solutions.

Having a combined EEZ and working with international partners and using technology enables them to maintain indigenous standards. Sustainable developments can be achieved only by working with local communities to create employment opportunities in an environment of trust.

In short, unity is needed for the survival of local fishing communities. Large Marine Ecosystems (LMEs) in Africa are shared by 33 coastal countries and 600 million people. Illegal fishing amounts to more than US $2 billion in lost profits annually – as noted by Vishal Surbun (February 2021) in “Africa’s combined exclusive maritime zone concept” in Institute for Security Studies, Africa Report 32 – https://issafrica.org/research/africa-report/africas-combined-exclusive-maritime-zone-concept.

On November 10, 2020, a new App was launched called DASE (which means “evidence” in the Fante dialect of Ghana) by the Environmental Justice Foundation (EJF) – as noted by EJF Staff (November 10, 2020) in “New Phone App is Effective Weapon in Ghana’s Fight Against Illegal Fishing” in Environmental Justice Foundation –https://ejfoundation.org/news-media/new-phone-app-is-effective-weapon-in-ghanas-fight-against-illegal-fishing.

Communities in Ghana and Liberia can use this to gather evidence against illegal vessels, mostly industrial trawlers under foreign flags. When a vessel is spotted illegally fishing or damaging canoes, the user takes a photo of the boat through the app with its name/identification number and records the geo-satellite position.

The app uploads the report to a central database where the government can use the evidence to catch and sanction the perpetrators. A similar app must be introduced in Ajami, an Arabic script, in West Africa. Ajami is a form of literacy that remains widespread across West Africa with little or no government support. In East Africa and the Horn of Africa Swahili should be used. The idea is to find a medium to connect with local peoples to combat Illegal, Unreported, and Unregulated (IUU) fishing.

Fishing is not simply a livelihood it is a culture and a way of life. Collaborative management and decision-making can help indigenous people maintain vocational skills and pride in their culture. Organizations are formed to promote peace, values, and well-being of citizens.

Coordinating efforts to restore the economy, manage risks and remove barriers helps reduce costs and create a larger market for local fishing communities. While there are several challenges mentioned in operationalizing the Combined Exclusive Maritime Zone for Africa (CEMZA) in terms of sovereignty and maritime rights, a more significant challenge is the food insecurity and poverty that arises from increased transnational organized crime, and illegal, unreported, and unregulated fishing by countries like China.

In addition, there are environmental crimes, marine environmental degradation, disappearing biodiversity, and the dire effects of climate change and global warming. However, establishing CEMZA and using multiple technologies is absolutely, critical in developing and maintaining pan-African collaboration that brings about substantive change and protection for vulnerable local fishing communities. Africa needs CEMZA to be a tiger with teeth and claws.

Geetika Chandwani is finishing her M.A. at the School of Diplomacy and International Relations at Seton Hall University, New Jersey, where Professor Purnaka L. de Silva lectures in the M.A. program.