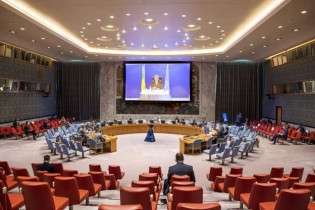 By Purnaka L. de Silva
Russian President and former intelligence officer Vladimir Vladimirovich Putin has been at the helm of power since 1999, promoting jingoistic nationalism to keep his hold on power and creating a democratic deficit on the home front.

By Purnaka L. de Silva
I returned from attending a three-hour Easter Sunday mass at the Fordham University Church around midnight New York time on April 20, 2019, when my phone rang and a colleague asked me what’s going on in Sri Lanka? I said what is going on? He said there were a series of coordinated terrorist bombings with multiple fatalities and scores of injuries in my native country. For the next four and a half hours I was on the phone trying to piece together what happened, including reaching out to Sri Lanka’s Secretary of Defence Hemasiri Fernando.

By Purnaka L. de Silva
“Unity is the path. Our future depends on it,” said UN Secretary-General Antonio Guterres, as he issued an unequivocal global ‘Red Alert’ in his New Year message on December 31, 2017.
ADVERTISEMENT ADVERTISEMENT