“If we believe in absurdities we shall commit atrocities” - Voltaire 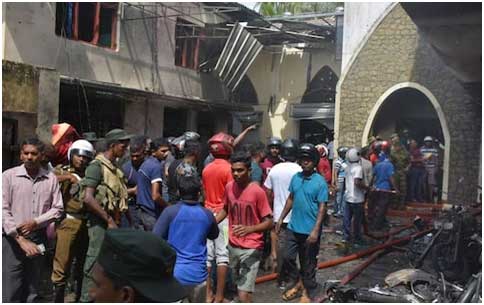 NEW YORK, Apr 22 2019 (IPS) - I returned from attending a three-hour Easter Sunday mass at the Fordham University Church around midnight New York time on April 20, 2019, when my phone rang and a colleague asked me what’s going on in Sri Lanka? I said what is going on? He said there were a series of coordinated terrorist bombings with multiple fatalities and scores of injuries in my native country. For the next four and a half hours I was on the phone trying to piece together what happened, including reaching out to Sri Lanka’s Secretary of Defence Hemasiri Fernando.

The toll as of Monday, April 22 is 290 dead and 500 injured. Sri Lanka’s Ministry of Foreign Affairs confirmed that 36 foreigners died, with 20 still unidentified; and those identified include: 5 British (2 with dual US nationality), 3 Danes, 1 Dutch, 1 Portuguese, 2 Turks, 3 Indians and 1 Japanese.

This is the second time in history that the Indian Ocean island of Sri Lanka has been bombed on an Easter Sunday morning when the faithful were at prayer. The first was a coordinated air attack on the capital Colombo, launched from aircraft carriers of the Imperial Japanese Navy at 7:30 a.m. on Easter Sunday, April 5, 1942 – the same date that the U.S. Pacific Fleet in Pearl Harbor was also attacked in a different time zone.

• Zion Protestant Christian Church in Batticaloa on the eastern seaboard of Sri Lanka, 318.1 km from Colombo.

• Tropical Inn Guest House in Dehiwala near the zoo, 10.2 km south of Colombo.

• Two explosions at suspected safe house in Dematagoda on the northwestern outskirts 3.1 km from Colombo, owned by a spice trader, allegedly the father of one of the suicide bombers. At least three police officers died in the blasts including Special Task Force (STF) police commandos, with seven suspects arrested.

• A 6-foot pipe bomb was located and destroyed near Bandaranaike International Airport by the Sri Lanka Air Force. 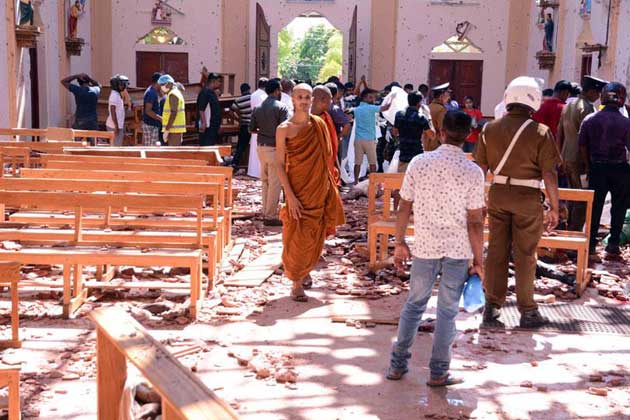 A fact commented on in the aftermath of the first wave of bombings by Defence Secretary Hemasiri Fernando, who confirmed that some of the attacks were carried out by suicide bombers.

Sri Lankan authorities have arrested 24 suspects and at least 1 woman as of Monday in an ongoing investigation to root out all the terrorists, who may number 30 with 20-30 targets, according to a suspect arrested down Ramakrishna Road, Wellawatte, 8.0 km south of Colombo.

At least three of the suicide terrorist bombers have been identified, all local Sri Lankan Muslims allegedly from eastern Sri Lanka:

Five years ago on March 24, 2014 the Peace Loving Moderate Muslims in Sri Lanka (PLMMSL) urged the Government of Sri Lanka to ban without delay an Islamic religious movement calling itself the (National) Thawheed Jama’ath “because it was fast becoming a cancer within Sri Lanka’s Muslim community.”

It is alleged that NTJ headed by Moulavi Zahran had holed up in Kattankudi, 327 km east of Colombo, and recruited impressionable Muslim high school students to travel to Syria via Turkey. The hypothesis is that following military defeat at the hands of multinational forces, these Daesh or so-called Islamic State (IS) associated recruits had returned to Sri Lanka.

These allegations are yet to be proven beyond reasonable doubt in a court of law. Having said that I would argue that the spectacular terrorist bombings on Easter Sunday perpetrated on wholly unsuspecting Christians, tourists and citizens could be a last hurrah from Daesh to demonstrate to their supporters and the world at large that they are not defeated. Every suicide bombing though is a defeat for Daesh as they are losing cadres on each occasion.

So where do we all go from here? Sri Lanka will recover, as it has done commendably from the decades long brutal civil wars and bloodletting that ended ten years ago. What of the human spirit and fragile inter-communal harmony between minority Christians, Muslims and majority Buddhists in Sri Lanka, and beyond?

That is the greatest challenge moving forward and Sri Lanka’s fractious political leaders have to demonstrate true statesmanship, and invest the required time, effort and resources in partnership with all faith leaders to make a difference.

Thereby, defeating the forces of darkness, ignorance and evil, and bringing enlightenment, peace and harmony to a beleaguered land. Similar actions must be taken by world leaders to overcome growing dystopia and unchecked authoritarianism that is haunting the 21st century, putting the planet and liberal democracy in dire peril.