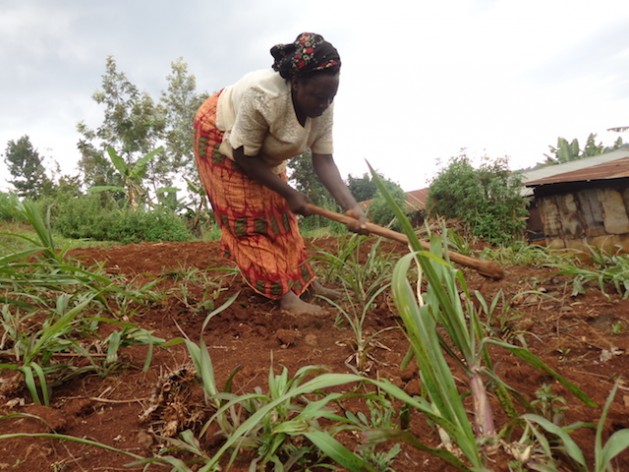 Agriculture accounts for over 25 percent of Africa’s GDP while employing over 70 percent of people that live in rural communities. Credit: Miriam Gahtigah/IPS

URBANA, Illinois, Nov 3 2021 (IPS) - Local, national and world leaders, and committed climate change activists are in Glasgow for the 26th UN Climate Change Conference of the Parties (COP26) to share the progress they’ve made since the COP21 in Paris six years ago and to discuss what comes next. One of the issues that must be on the table at COP26 is the worrying impact of climate change on agriculture in Africa.

Agriculture accounts for over 25 percent of Africa’s GDP while employing over 70 percent of people that live in rural communities. When agriculture is impacted, women, who work in the agricultural sector suffer the consequences. The entire agriculture value chain is threatened by climate change. According to a recent World Bank Report, unless urgent actions are taken, climate change could force millions of Africans to migrate to new areas.

At the production level, climate change is impacting agriculture via drought and flooding events. In 2020, flooding in East Africa impacted over six million people. In 2021, flooding has affected 669,000 people in West and Central Africa, over 700,000 people in Sudan and South Sudan and over 100,000 people in Nigeria.

It is also having an impact through invasive and transboundary plant-eating insect pests such as the fall armyworm and the desert locust. Invasive insect pests cost the African continent U.S. $1 billion every year. Impacted the most are vulnerable groups that include African small holder farmers, women and girls, children, disabled and elderly people.

Without a climate-resilient agricultural sector, even the most ambitious climate initiatives will bear minimal returns. It is imperative for countries participating in the COP26 meeting to finance agriculture initiatives.

Complementing access to water for agriculture are other important tools including access to most recent and improved agricultural technologies and resources. From improved and climate-smart seeds to drought, flooding, insects and plant disease-tolerant crops varieties to recent knowledge of agricultural practices and access to markets and financial help.

Important is the need for African countries to strengthen their early warning systems. These can only be achieved through strengthening African countries abilities to tap on big data and use it as a tool to stay ahead of all the climate linked disasters. Accompanying early warning systems is the need to lay out comprehensive climate adaptation initiatives.

At the center of all actions and strategies is the need to put the people on the ground and African countries at the center of climate action. As a founder to a startup, Oyeska Greens that is working with farmers at the Kenyan Coast I have seen firsthand the value of putting farmers at the forefront.  Putting them at the forefront ensures that the strategies and initiatives that are laid out are relevant and meeting the current challenges that small holder farmers and other vulnerable groups are facing as it relates to climate change. Without including the very people whom we are serving, we risk unsustainable and irrelevant solutions.

Climate change is the most urgent crisis of our times. While talk and meetings such as COP26 are important, in the end it is the initiatives and actual projects being implemented in African countries, particularly in the agricultural sector that will help move the needle and address the escalating climate change crisis.

All countries must work together and take action in the fight against climate change to avert many crises that are projected to happen if we fail to act.  Lives of vulnerable citizens including women, elderly and people with disabilities are at stake. Now is the time to ACT