DHAKA, Bangladesh, Nov 24 2021 (IPS) - Rising sea levels, extreme climate conditions such as severe storms faced by Bangladesh, one of the primary victims of anthropogenic climate change, the country is set to be the worst sufferer from climate change by 2025, far worse than any other country.

Bangladesh, with a population of over 166 million, is imperilled due to its position between two key rivers, the Brahmaputra and Ganges. Many regions in the country are also prone to drought. As a developing country Bangladesh does not have enough financial resources for protective or reparative measures.

The photo story ‘Wave’ by Mohammad Rakibul Hasan, an award wining Bangladeshi photo journalist, captures images of people who face this crisis as a human problem. Bangladesh is a small, overpopulated country in Southeast Asia with primarily an agro-based economy. Besides, climatic hazards like cyclones, floods, drought, soil salinity, and river erosions are more frequent nowadays. These two facts contribute to the increasing number of climate refugees forced to migrate to the cities, worsening the socio-economic problems. The barrages [1] built across the rivers inside the border of India have resulted in both flooding and drying of the river beds in Bangladesh. Major rivers like Padma, Jamuna, Meghna, Brahmaputra, and smaller rivers in the coastal region erode when the water level rises. Due to prolonged droughts, the temperature is increasing every year at an alarming rate. Sadly, people can’t adapt to this rapidly changing climate and are on the brink of socio-economic insecurity. The waves, whether present or absent, don’t bring any hope for these people. When they hit, they take away the valuable land and lives. When the waves are gone, nothing is left but parched, cracked riverbeds.

[1] A report on the impact of Farakka barrage on the human fabric. Manisha Banerjee, on behalf of the South Asian Network on Dams, Rivers, and People (SANDRP).
http://sandrp.in/dams/impct_frka_wcd.pdf 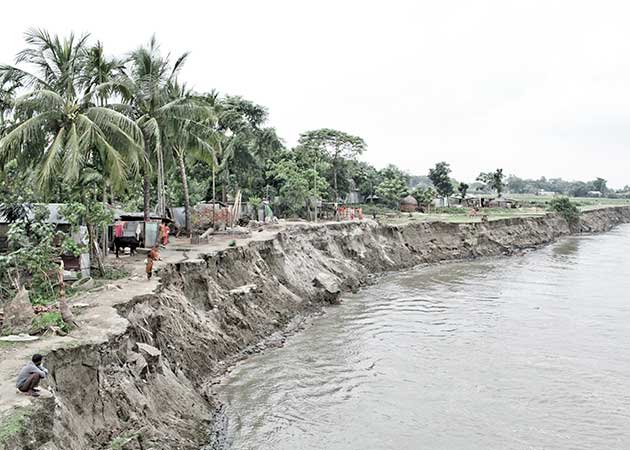 The two rivers Jamuna and Brahmaputra are surrounded by Islampur, a sub-district of Jamalpur, one of the most climate-vulnerable places in Bangladesh. The Jamuna River is the ferocious, devastating and eating village after village by eroding its banks. Islampur town is at risk; the protecting dam is not built sustainably. Islampur, Jamalpur, Bangladesh. Credit: Mohammad Rakibul Hasan 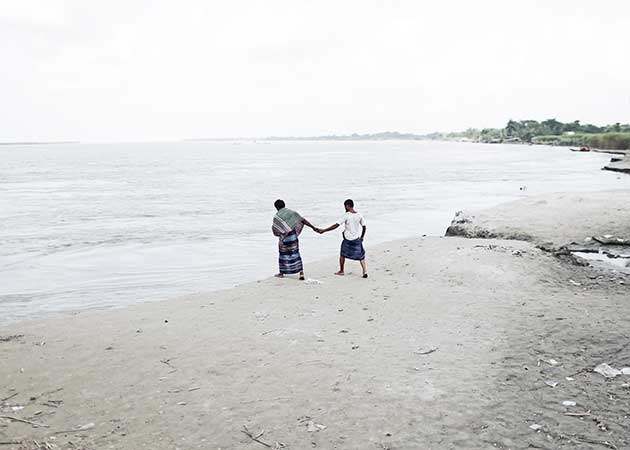 Dohar, a sub-district of Dhaka, is bordered by Padma River. The mighty Padma during the summer behaves like a monster and eats its surrounded lands, and even changes the usual floating path. It creates enormous erosion and displaces inhabitants on both sides of the river. Due to the change in climate, floods cause environmental degradation. Dohar, Dhaka, Bangladesh. Credit: Mohammad Rakibul Hasan 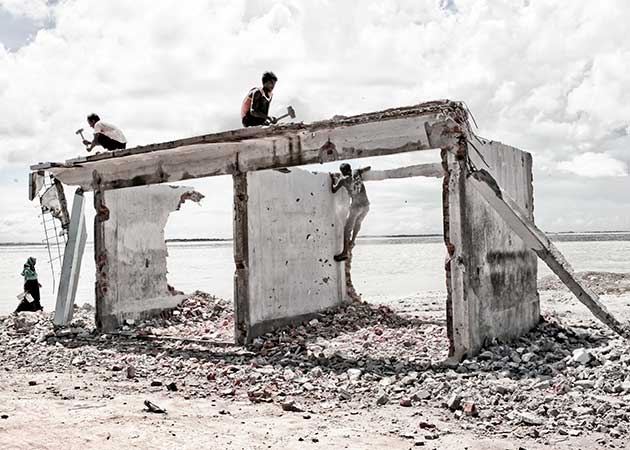 People are removing the remaining structures and belongings as the River Padma is about to swallow the area. River Padma at Mawa is aggressive in the summer and very often it erodes massively, displacing people and their belongings. Mawa, Dhaka, Bangladesh. Credit: Mohammad Rakibul Hasan 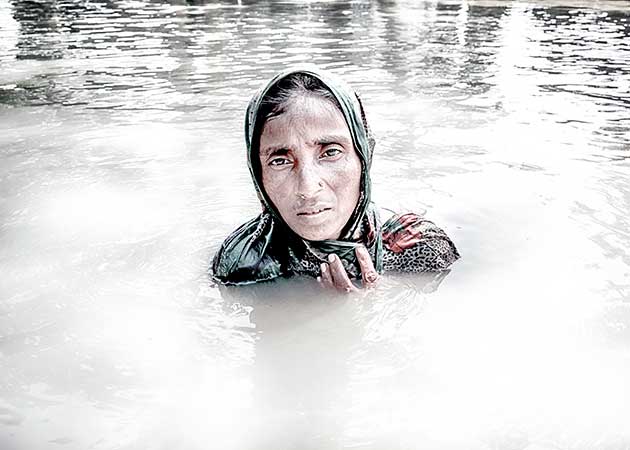 Women, children and the elderlyare the most vulnerable due to the climate crisis. In Islampur, during floods, low-income households in the villages suffer the most. A woman is in search of food relief to feed her children. Islampur, Jamalpur, Bangladesh. Credit: Mohammad Rakibul Hasan 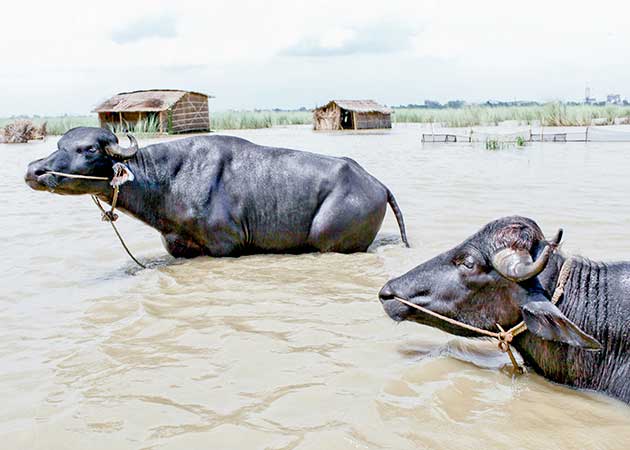 The vast area outside Rajshahi City is flooded on both sides of the Padma River banks. People have been experiencing adverse calamities; the change in ecology affects adapting to the new norms of hot weather. Rajshahi, Bangladesh. Credit: Mohammad Rakibul Hasan 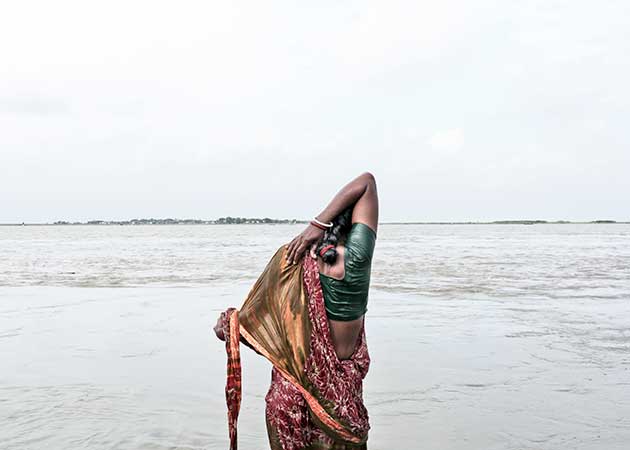 People are trying to adapt to extreme climate conditions. Many places of Dohar, Dhaka, are washed away and many people moved to other cities while many others still live there as they have nowhere to go except to move back slowly away from the river. Dohar, Dhaka, Bangladesh. Credit: Mohammad Rakibul Hasan 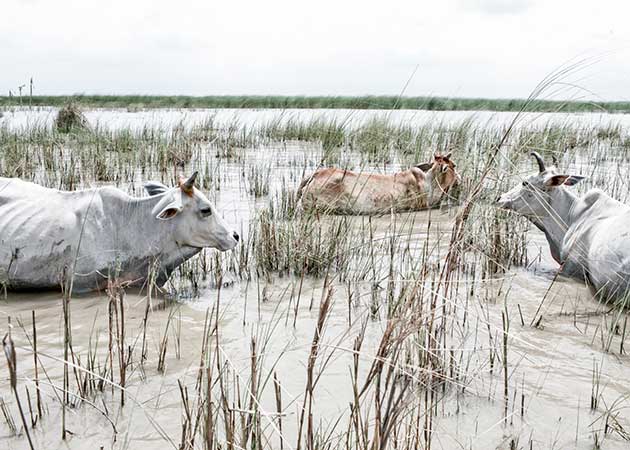 The frequent floods across Rajshahi division by the River Padma are causing massive economic loss, displacement, and health hazards. The whole ecology and biodiversity have changed, and even animals are trying to adapt to extreme climate conditions. Rajshahi, Bangladesh. Credit: Mohammad Rakibul Hasan 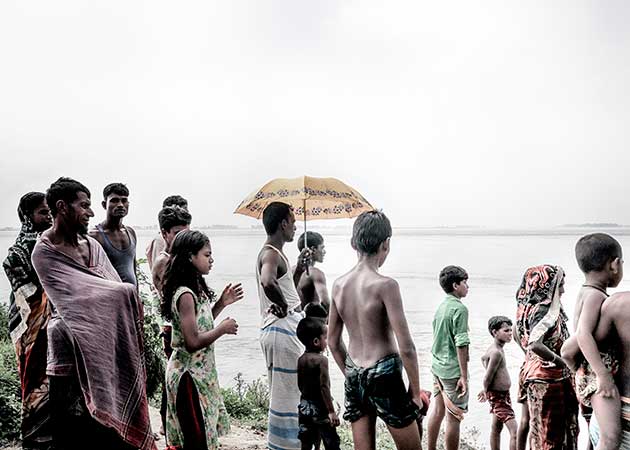 The River Jamuna has caused floods in the whole territory of Islampur, and villagers are waiting for flood relief. They had to shift their houses and belongings. Many of them were starving as relief was insufficient. Islampur, Jamalpur, Bangladesh. Credit: Mohammad Rakibul Hasan 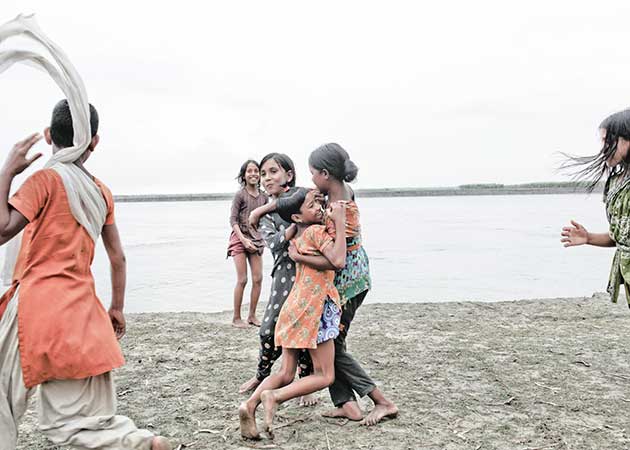 The Climate Crisis is leading to school drop outs. The rivers swallow up many schools; children with their families had to move from place to place with no sustainable livelihoods near the big rivers. Islampur, Jamalpur, Bangladesh. Credit: Mohammad Rakibul Hasan 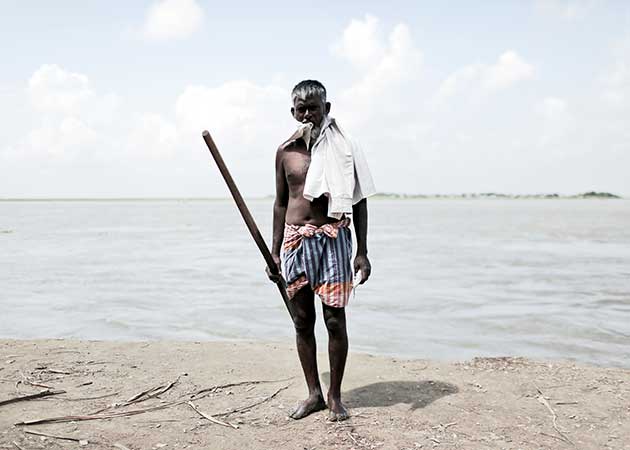 Frequent changes of the riverscapes are problematic for the fishermen as they have to shift their homes. The village markets get moved too and the villagers go to different places to secure their livelihoods. Climate Crisis makes it harder for everyone in terms of its economic impact and other socio-geographical effects.
Mawa, Dhaka, Bangaldesh. Credit: Mohammad Rakibul Hasan