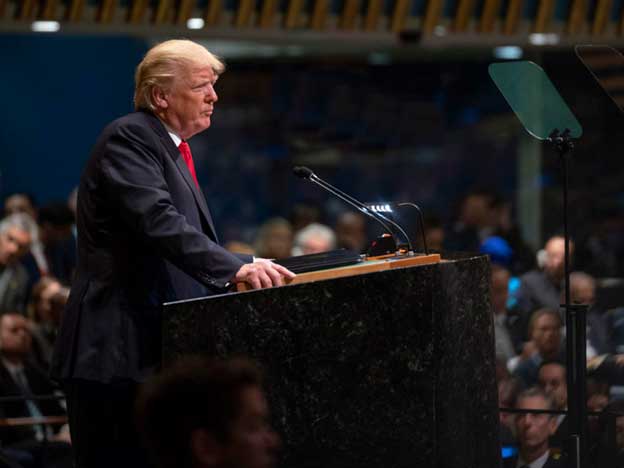 NEW YORK, Jan 6 2022 (IPS) - Unless the Republicans and Democrats put the nation above their party and personal interests, our democracy will face the gravest danger in more than a hundred years.

Authoritarianism will creep in, leading to the collapse of American political institutions and the demise of our democracy as we know it.

On January 6, Trump was planning to hold a press conference during which he was expected to repeat lies for the hundredth time that the election in 2020 was stolen, that the insurrection a year ago was actually peaceful, and that he – not Biden – is the duly-elected president.

He canceled the press conference at the urging of the GOP and now is expected to instead spread these lies at his Arizona rally next week. He will, needless to say, remain true to himself and deny any wrongdoing and blame the Democrats for persistently undermining his presidency as well as for all the ills that face America today.

Trump is uniquely dangerous; he wants to solidify his absolute control over the Republican Party, rouse his followers, instill hatred of the Democrats, and of course raise enough money for his re-election campaign should he decide to run again.

Moreover, the Arizona rally will be his first foray into the mid-term elections designed to rouse the rank-and-file of the Republican Party to recapture the House and the Senate as the forerunner to the 2024 election.

The tragic aspect of the Trump phenomenon is that the elected leaders of the Republican Party continue to follow him religiously, regardless of the fact that he is corrupt, was defeated in re-election as an incumbent, was impeached twice, and faces several criminal charges.

Indeed, no former president in American history has been able to maintain his grip on his party the way Trump has. And no Republican Party has abdicated its moral and constitutional responsibilities and willingly succumbed to a deranged egomaniac, misogynist, and habitual liar. How could this happen, and why? The answer is Trump’s and the Republicans’ voracious lust for power.

The Republican Party has become a minority party and there is no circumstance under which the party can win nationally in a free and fair election. Demographically, Black, Hispanic, Asian, Native American, and other minorities currently represent more than 40 percent of the American population, and it is estimated that by 2045 they will become the majority, who largely vote for Democrats.

Collectively, even at the present they can deny the Republican Party from ever capturing the White House again if they go out and vote en masse.

The Republican Party faces two choices: one is to adapt to the changing demographic reality and develop socio-economic programs that respond to the needs of people of color (POC) without sacrificing much of their conservative ideology.

This includes lowering taxes, particularly for those who earn less than $200,000 a year, immigration reform, which the Republican Party has long-acknowledged needs addressing and will help in outreach especially to Hispanic voters, and supporting minority small business owners with tax breaks and other financial incentives, which won’t incur further government spending.

The second choice is to prevent or make it extremely difficult for POC to exercise their right to vote through a variety of deplorable measures. One state after another is passing discriminatory rules, including gerrymandering districts on racial lines, restricting early voting, which disproportionately affects Black Americans who are more likely than any other ethnic or racial group to cast early ballots (whether in-person or by mail and absentee ballots), enacting voter ID laws even though voter impersonation fraud is exceedingly rare and those who don’t have valid ID are disproportionately POC, and empower state legislators to invert their own elections and manipulate the electoral college to their advantage.

Sadly, if not tragically, the Republican Party went for the latter option. Many Republicans simply believe that POC are illegitimate citizens and should not be able to vote and have the power, as they fear accurately or otherwise, to enact laws against whites, the way whites have enacted discriminatory laws against POC. America, from their perspective, was founded by white people, and the thought that the US is becoming browner every passing day scares them to the core.

They needed a leader who is a bigot, shameless, and crude, with no scruples and no morals, but audacious—a performer with the ability to sway large audiences with his lies and sneering face. The Republicans need him to promote their agenda without fear of public repercussions, and he needs the party to satisfy his ego in order to exercise raw power, and also grant him its full support should he decide to run again.

We are still reeling from the violent storming of the Capitol on January 6 to prevent the peaceful transfer of power. Trump, who incited his followers to attack the Capitol, was ready to shatter our democracy only to bask in his authoritarian impulse.

What does that say about the Republican Party, which largely ignored or downplayed the insurrection in its determination to seize power and chose chaos and violence over voting, even at the expense of tearing our democratic institutions apart? How ironic and deeply troubling that 52 percent of Republicans say that the insurrectionists were trying to protect democracy.

The most ominous note that must be repeated loud and clear is that the party under the leadership of Trump will incite violence should they fail to win the 2022 election, as anyone who carefully listens to the many utterances spewed by reckless Republicans leaders can discern with clarity.

In that context, although Trump during his rally will not openly encourage his followers to resort to violence to undo the result of the election, the message to them will be loud and clear.

It is hard to exaggerate the transformation of the Republican Party since the rise of Trump in 2016, from a patriotic party that stood for democracy to a white supremacist party willing to destroy it only to stay in power.

Many thousands of Republican leaders should follow the footsteps of Representative Liz Cheney, who stood up against Trump and in favor of the truth, and still rescue our democracy by accepting reality and being truthful with their followers.

The election of Biden gave the country hope of preserving our democracy and attending to the political and social malaise that swept the nation, especially during Trump’s tenure in the White House. But to address these ills, the Democrats must spare no effort to hold onto the House and Senate in the 2022 mid-term election, as these will be the most consequential in more than a century.

Indeed, should the Republicans manage to recapture both chambers of Congress, our democracy will slide toward the precipice of disintegration while authoritarianism creeps in, and Biden’s agenda will be shattered.

The Democrats have their work cut out for them. They must rise in unison, which is bitterly still missing, stop short of nothing to strengthen voting rights, prevent the appointment of partisans to subvert the election, fight political corruption at every level, make political power decreasingly dependent on money, get out the vote, and eliminate the filibuster to pass the voting rights bill.

Furthermore, they must hold accountable the traitors behind the insurrection on January 6, including Trump.

Democrats and the millions of law-abiding Republicans should sound the alarm before it’s too late, and never waver to preserve and protect America’s 244-year-old democracy that served as a beacon of hope and freedom to the global community.