This article is part of IPS coverage of International Women's Day, Mar. 8, whose theme this year is "Gender Equality Today for a Sustainable Tomorrow". 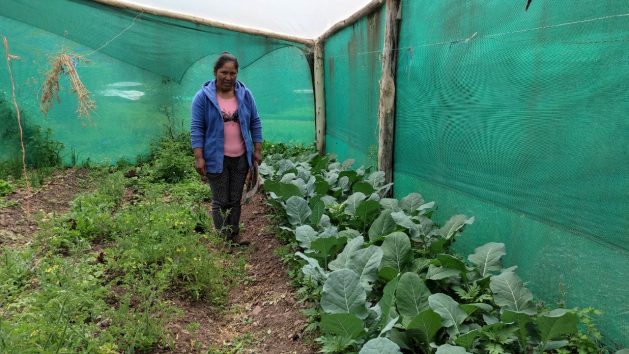 Peruvian farmer Hilda Roca, 37, stands in her agro-ecological garden in Cusipata, a town located at more than 3,300 meters above sea level in the highlands of Cuzco, where she grows vegetables for her family and sells the surplus with the support of her adolescent daughter and son. CREDIT: Mariela Jara/IPS

LIMA, Mar 7 2022 (IPS) - “Pachamama (Mother Earth) is upset with all the damage we are doing to her,” says Hilda Roca, an indigenous Peruvian farmer from Cusipata, in the Andes highlands of the department of Cuzco, referring to climate change and the havoc it is wreaking on her life and her environment.

From her town, more than 3,300 meters above sea level, she told IPS that if women were in power equally with men, measures in favor of nature that would alleviate the climate chaos would have been approved long ago. “But we need to fight sexism so that we are not discriminated against and so our rights are respected,” said the Quechua-speaking farmer.

The link between climate change and gender is the focus of the United Nations’ celebration of this year’s International Women’s Day, Mar. 8, under the theme “Gender equality today for a sustainable tomorrow”.

The aim is to “make visible how the climate crisis is a problem that is closely related to inequality, and in particular to gender inequality, which is expressed in an unequal distribution of power, resources, wealth, work and time between women and men,” Ana Güezmes, director of the Gender Affairs Division of the Economic Commission for Latin America and the Caribbean (ECLAC), told IPS.

Latin America is highly vulnerable to the climate crisis despite the fact that it emits less than 10 percent of the greenhouse gases that are warming the planet.

In addition, climate injustice has a female face in the region: lower-income population groups, where the proportion of women is higher, are more exposed to climate effects due to their limited access to opportunities, despite the fact that they are less responsible for emissions.

The extreme poverty rate in the region increased from 13.1 percent to 13.8 percent of the population – from 81 to 86 million people – between 2020 and 2021, according to data released by ECLAC in January. Women between 25 and 59 years of age are the most affected compared to their male counterparts. This situation is worse among indigenous and rural populations, who depend on nature for their livelihoods.

These aspects were highlighted at ECLAC’s 62nd Meeting of the Presiding Officers of the Regional Conference on Women, held Jan. 26-27, whose declaration warns that women and girls affected by the adverse impacts of climate change and disasters face specific barriers to access to water and sanitation, health and education services, and food security.

And it is women who are mainly responsible for feeding their families, fetching water and firewood, and taking care of the vegetable garden and animals.

“That is why we maintain that the post-pandemic recovery must be transformative in terms of sustainability and equality,” Güezmes emphasized from ECLAC headquarters in Santiago, Chile.

To this end, she said, this recovery “must untie the four structural knots of gender inequality that affect the region so much: socioeconomic inequality and poverty; the sexual division of labor and the unjust organization of caregiving; the concentration of power and patriarchal, discriminatory and violent cultural patterns; and the predominance of the culture of privilege.” 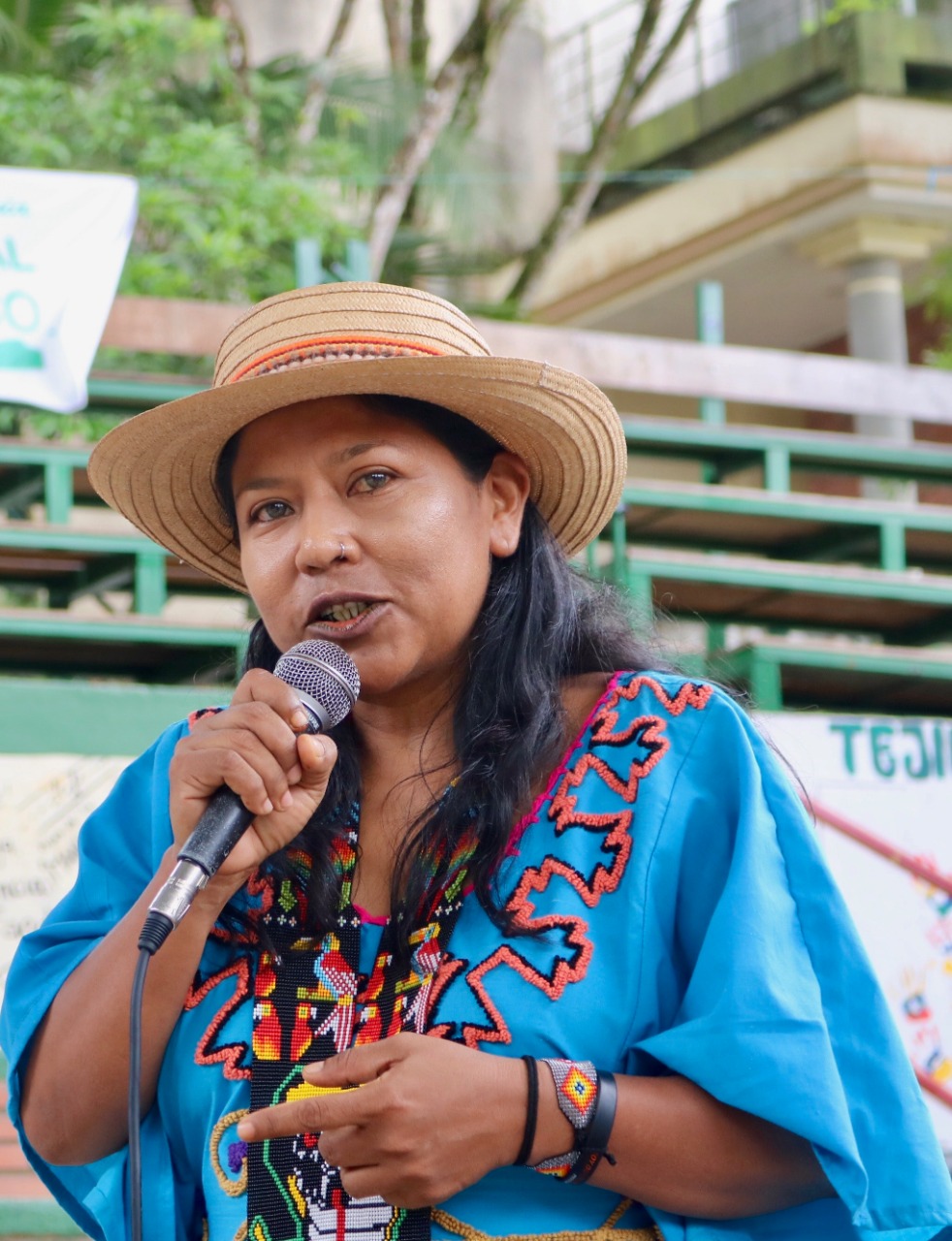 Luz Mery Panche, an indigenous leader of the Nasa people, discussed the need to incorporate a gender perspective into the climate crisis. She talked to IPS from San Vicente del Caguán, in the department of Caquetá, in the Amazon region of Colombia, a country facing violent attacks on defenders of land and the environment.

For her, more than sustainable, “it is about moving towards a sustainable future.”

“We need to change the conditions that have generated war and chaos in the country, which is due to the hijacking of political and economic power by an elite that has been in the decision-making spaces since the country emerged 200 years ago,” she said.

Panche is a member of the National Ethnic Peace Coordination committee (Cenpaz) and in that capacity is part of the special high-level body with ethnic peoples for the implementation of the peace agreement in her country. She is a human rights activist and a defender of the Amazon rainforest.

She argued that to achieve a sustainable future “we must reconcile with Mother Earth and move towards the happy, joyful way of life that we deserve as human beings.”

This, she said, starts by changing the economic model violently imposed on many areas without taking into account the use of the soil, its capacities and benefits; by changing concepts of economy and the educational model; and by organizing local economies and focusing on a future of respect, solidarity and fraternity.

Panche said that in order to move towards this model, women “must have informed participation regarding the effects of climate change.

“Although we prefer to call Mother Earth’s fever ‘global warming’. And it is up to us to remember to make decisions that put us back on the ancestral path of harmony and balance, what we call returning to the origin, to the womb, to improve coexistence and the sense of humanity,” she said. 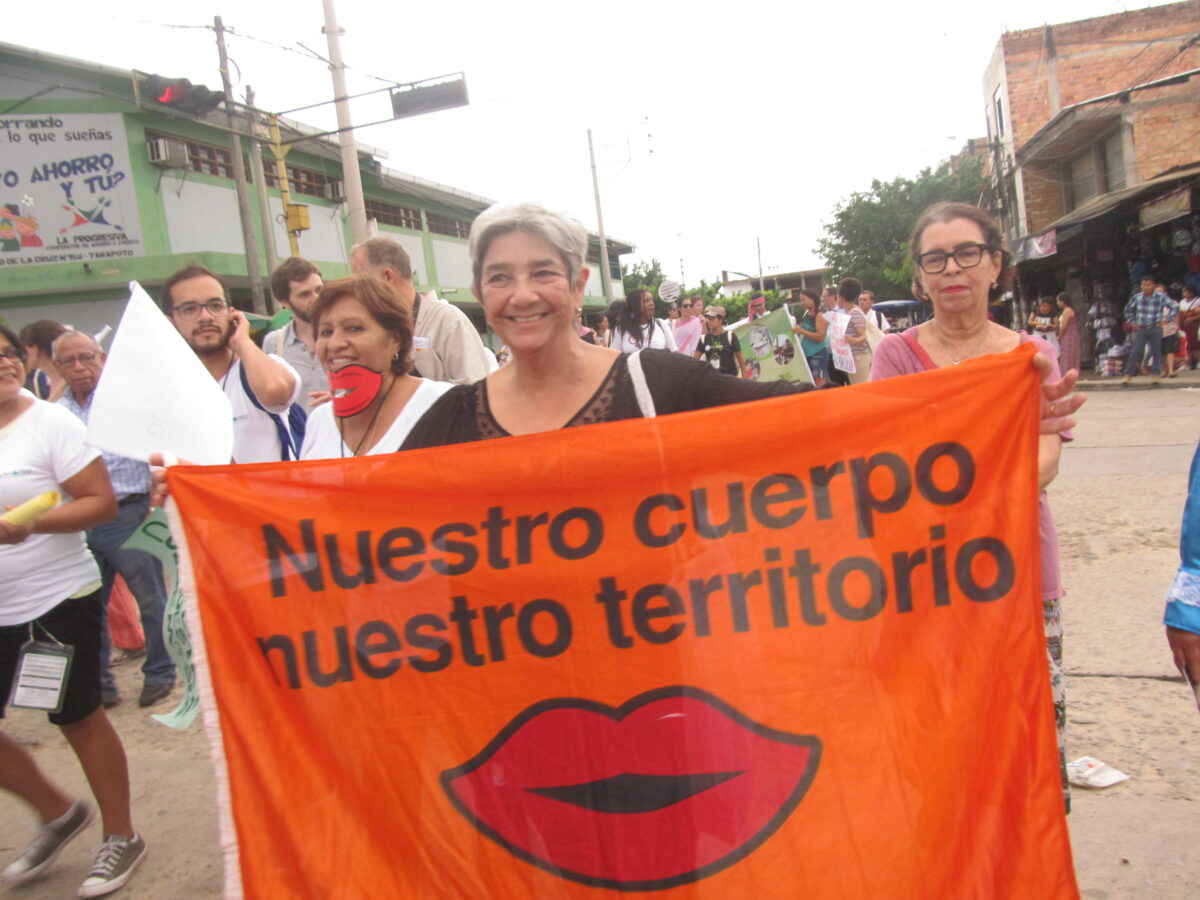 Uruguayan ecofeminist Lilian Celiberti carries a banner reading “Our body, our territory” in the streets of Tarapoto, a city in the central Peruvian jungle, during an edition of the Pan-Amazon Social Forum. CREDIT: Mariela Jara/IPS

Changing times: another kind of coexistence with nature and equality

Lilian Celiberti, Uruguayan ecofeminist and founder of the non-governmental Cotidiano Mujer and Colectivo Dafnias, told IPS from Montevideo that governments have the tools to work on gender equality today in order to have a sustainable future tomorrow, as this year’s Mar. 8 slogan states.

But against this, she said, there are economic interests at play that maintain a development proposal based on growth and extreme exploitation of nature.

She called for boosting local economies and agroecology among other community alternatives in the Latin American region that run counter to the dominant government approach.

“But I believe that we are at a very complex crossroads and that only social participation will be able to find paths of multiple, diverse participation and collective sustainability that incorporate care policies and awareness of the eco-dependence of human society,” she said.

Celiberti said “we are on a planet of finite resources and we have to generate a new relationship with nature, but I see that governments are far from this kind of thinking.”

ECLAC’s Güezmes emphasized that social movements, especially those led by young indigenous and non-indigenous women in the region, have exposed the multiple asymmetries and inequalities that exist. 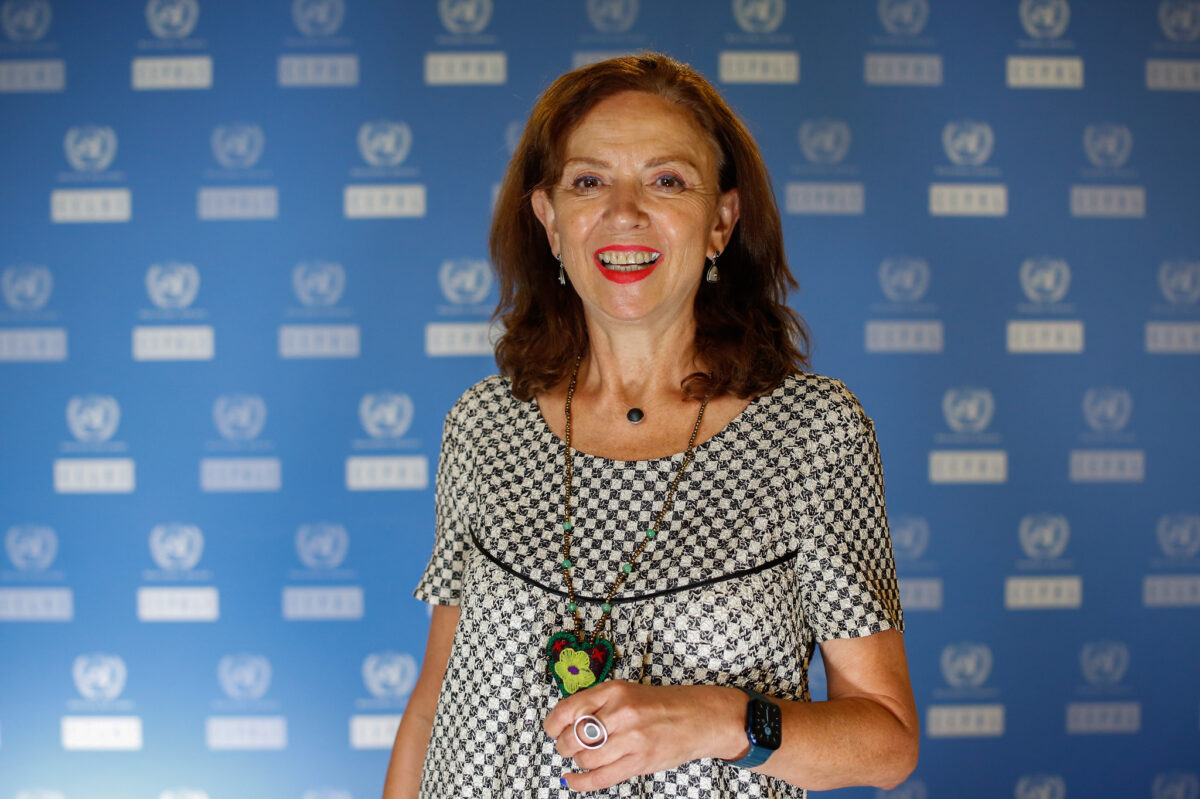 Ana Güezmes is director of the Gender Division of the Economic Commission for Latin America and the Caribbean. CREDIT: ECLAC

“We have an intergenerational debt, where young women have put at the center of the debate the unsustainability of the current development style that has direct impacts on our future at a global level and direct impacts on their livelihoods, territories and communities,” said Güezmes, who is from Spain and has worked for years within the United Nations in several Latin American countries.

She recognized the contribution of feminist movements that focus on a redistribution of power, resources and time to move towards an egalitarian model that includes the reduction of violence.

And she warned that from a climate perspective, the window of opportunity for action is closing, so we must act quickly, creating synergies between gender equality and climate change responses.

Güezmes said that “we are looking at a change of era” with global challenges that require a profound transformation that recognizes how the economy, society and the environment are interrelated. “To leave no one behind and no woman out, we must advance synergistically among these three dimensions of development: economic, social and environmental,” she remarked.

The expert cited gender equality as a central element of sustainable development because women need to be at the center of the responses. To this end, ECLAC plans to promote affirmative actions that bolster comprehensive care systems, decent work and the full and effective participation of women in strategic sectors of the economy.

She also raised the need to build “a renewed global pact” to strengthen multilateralism and achieve greater solidarity with middle-income countries on issues central to inclusive growth, sustainable development and gender equality.

“We have reiterated the urgent need to advance new political, social and fiscal pacts focused on structural change for equality,” Güezmes stressed.

She stated that in this perspective, the participation of women in all their diversity in decision-making processes is very important, particularly with regard to climate change.

To this end, she remarked, it is necessary to monitor their degree of intervention at the local, national and international levels – where asymmetry persists – and to provide women’s organizations, especially grassroots ones, with the necessary resources to become involved in such spaces.

“It involves strengthening financial flows so that they reach women who are at the forefront of responses to climate change and who are familiar with the situation in their communities, and boosting their capacities so that women from indigenous, native and Afro-descendant peoples participate in decision-making spaces related to the environment to promote the exchange of their ancestral knowledge on adaptation and mitigation measures,” she said.

Güezmes highlighted the contribution of women environmental activists and defenders to democracy, peace and sustainable development. It is necessary to “recognize their contribution to the protection of biodiversity and to development, despite doing so in conditions of fragility and exploitation and having less access to land, productive resources and their control,” she said.

For her part, Roca, who like other local women in the Peruvian Andes highlands practices agroecology to adapt to climate change and reconcile with Pachamama, calls for their voices to be heard.

“We have ideas and proposals and they need to be taken into account to improve the climate and our lives,” the indigenous farmer said.